The Haas family, heirs to a fortune made in tanning chemicals, is using the William Penn Foundation to pollute Delaware River politics everywhere one looks.

Jim Willis has a great post over at Marcellus Drilling News regarding a StateImpactPA story about the work of the latter’s own benefactor, the William Penn Foundation. As Jim notes:

One of the worst of the worst non-profit organizations that continues to fund anti-shale activities in the Marcellus/Utica is the William Penn Foundation. By all rights their non-profit (i.e. tax-free) status issued by the IRS should be revoked because of their overt support of anti-fracking initiatives. But we’re not holding our breath … Millions of dollars buys a lot of influence (and a lot of people) … StateImpactPA is a mouthpiece for William Penn. So we found it interesting that they ran an article (no doubt commissioned by William Penn) that admits William Penn and nearly $100 million (from William Penn and other sources) is at the nexus of some 40 “conservation” groups colluding in their attempt to keep development out of the Delaware River Basin. That development includes farming and shale drilling.

StateImpactPA‘s story is, as might be expected, is a puff piece. It discusses something called the Delaware River Watershed Initiative, questions what it has achieved in cleaning up water quality, concludes it’s not much at all and then hypes the future potential. The real story, of course, isn’t told at all. 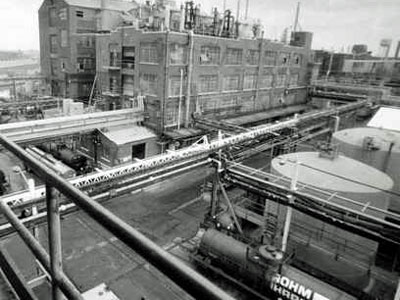 One of the earlier Rohm & Haas chemical plants (Philly.com)

That real story is about the way some very wealthy heirs to a fortune made in tanning chemicals have used to the William Penn Foundation to conduct a gentry class war against economic and energy development in the region, polluting Delaware River politics with an anti-growth ideology.

The William Penn Foundation is the plaything of Philadelphia’s Haas family, the founder of which was Otto Haas. He created a fortune that made the family America’s 97th richest in 2015, according to Forbes magazine:

In 1909, Otto Haas came to Philadelphia to expand a fledgling leather tanning materials company he’d launched with chemist Otto Rohm in Germany. He ran Rohm and Haas, which grew into a massive specialty chemicals manufacturer, until two days before his death in 1960… In 2009, just before Rohm and Haas turned 100, it was bought out by larger competitor Dow Chemical…

The third generation of the Haas family now runs the William Penn Foundation, which received the bulk of Otto Haas’s estate and $750 million of the family’s earnings from the merger… More than 38 family members share a fortune estimated at $2.8 billion, more than half of which is eventually slated for charitable causes.

“Charitable causes,” of course, is a relative term. The William Penn Foundation is, theoretically at least, a private foundation funded by its inherited wealth and not involved in fund-raising from the general public, which would maker it a public charity. Both public charities and private foundations, are prohibited from supporting or opposing political candidates but the former may engage in limited lobbying, so long as “no substantial part” of the organization’s activities is “carrying on propaganda, or otherwise attempting, to influence legislation.” A private foundation such as the William Penn Foundation, though, is absolutely prohibited from making any grant “to carry on propaganda, or otherwise to attempt, to influence legislation.”

The reasons for such limitations are obvious. If private foundations were permitted to directly lobby or propagandize on behalf of legislation, all rich people would have to do to avoid taxes on their interest and dividend income while spending it to promote special interest legislation is to create a private foundation. It’s not hard, though, if you got a spare billion or two to sock away in a private foundation, to get around those rules by targeting your grants to other special interest non-profits who will also push the limits of legality by using their “charity” status to do the lobbying and propagandizing. They’re allowed to do a limited amount of it and all they have to do is stretch the definitions a bit.

This is precisely what appears to  be happening with the William Penn Foundation. It currently has assets of roughly $2.3 billion according to Guidestar, which is up from $2.0 billion in 2012. Well, it spends a lot of it on something called (watershed protection,” which might better be labelled as de-growth activities or “strategic parkification” as Vivian Krause calls it (we call it “making a wilderness“). Here are some of the grants it’s made in the last two years in this category:

There’s more, of course, but these sample grants alone account for over $6 million in just two year fighting fracking, natural gas development, pipelines and growth of any kind to create the wilderness legacy, not to mention the land for playground, the tanning chemical heirs want for themselves. The family has also, through the Foundation, funded the Pinchot Institute and the Delaware River Basin Commission (DRBC) itself even as its other grantees such as the Delaware Povertykeeper have co-opted, disrupted and sued the agency. Attorney William Warren, outside general counsel to the DRBC, serves on the boards of the Academy (where Carol Collier now works) and the Pinchot Institute (she’s also a member). It’s one big nest of cronies and everything begins and ends with the tanning chemical heirs – the Haas family.

The Haas family doesn’t just use the William Penn Foundation to work their will, either. They also have another foundation (the Wyncote Foundation) and investments in the primary news organization for the Philadelphia area – the Philadelphia Inquirer group. They donate large sums to the Philadelphia Foundation that, in turn, funds the Inquirer group through its selective donations and funds, putting David Haas not only on the board but in the position to ensure its message, just like that of StateImpactPA, is attuned to his interests. That’s why it’s impossible to get a Inquirer reporter to write about this massive de-growth effort or the way the family has manipulated everyone and everything to get its way.

Meanwhile, its big grantee, the Delaware Povertykeeper, is busy coming up with bizarre schemes to stop Congress from approving FERC commissioners:

If we can keep Congress from appointing any new Commissioners to FERC we will stop them in their tracks and keep them from abusing any more communities with their pro-industry bias.

While the industry and FERC are held at bay, Congress should be holding hearings investigating the abuses of power and law inflicted by FERC and identifying, and putting in place, much needed reforms.  Once the reforms are in place, it will be appropriate to consider FERC Commissioner appointments – but not until that time.

Use the letter below to write, directly and immediately, your Senator and Congressional Representative – urge them to hold the line to protect communities across America by saying “NO” to appointment of any new FERC Commissioners and instead to hold congressional hearings investigating the abuses of power and law demonstrated, day after day, by FERC and its Commissioners.

This is the garbage the William Penn Foundation supports through its funding. It also attacks on the DRBC, on several of whose committees the Povertykeeper sits as a result of Collier’s appointments:

Drilling and fracking would require cutting forests, developing natural landscapes, draining creeks, rivers and groundwater of hundreds of millions of gallons of precious water, creating hundreds of thousands of gallons of toxic wastewater which we have no way to safely manage, spewing air pollution that will bring illness and exacerbate climate change — bringing this all to an irreplaceable water supply and economic foundation for Pennsylvania, New York, New Jersey and Delaware communities.

Rather than looking to lift the moratorium, Governor Wolf should help us lay this issue to rest and both propose and support that the DRBC pass a permanent ban against drilling and fracking in the Delaware River Watershed.

Send your letter to the DRBC Commissioners — which means the representatives on the Commission for Governor Wolf, Governor Cuomo, Governor Carney, Governor Christie and the Army Corps Colonel representing President Trump — today, urge them to put in place a ban so the ongoing risk of opening up this important water resource to fracking and drilling is permanently laid to rest.

This propagandizing violates every notion of what a charitable organization is supposed to be. It’s all Delaware River politics, the William Penn Foundation is funding it and they clearly know what they’re funding; things like this and this. That it continues serves to demonstrate the undue influence of the group and why it should be reined in by removing its tax-exemption. I’m tired of these third generation trust-funded tanning chemical fortune heirs playing games with all of us; polluting Delaware River politics.