A New York Times story shows the Rockefeller agenda is finally experiencing some pushback but there’s a whole lot more to be told and it’s about the land.

Monday’s New York Times included a mention of this website and even a link to one of our stories — “It’s time to RICO the Rockefellers.” It was an excellent article and I’d be lying if I didn’t say I appreciated the mention. I must say, though, there is a lot more to be told and I sincerely hope John Schwartz will pick up on it. It’s also noteworthy that such a story appeared. The Rockefeller family can get whatever it wants printed in the New York Times whenever it wants. This piece tells me the Rockefeller agenda has now received enough pushback to force them to defend themselves. Well, good, but I’m not buying the altruism defense. 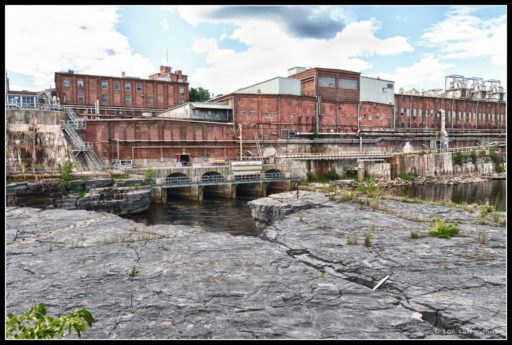 No, there is much more to the Rockefeller agenda than altruism. It’s about “strategic parkification,” making a wilderness and, ultimately, the land they want. They own the Eric Schneiderman. They owned Joe Martens and the New York State DEC. They’ve made sweetheart land deals with both Republican and Democrat administrations. The purpose? Buying up the Adirondacks and the Catskills for their own use with taxpayer money. The only thing threatening the whole enterprise is natural gas development. It would raise land prices and encourage landowners to hold onto properties rather than sell.

If the New York Times wants to dig deeper, and one hopes it will do so, it ought to look into some of those land deals the NRDC gang is making. The NRDC gang, which includes the Open Space Institute (run by princely paid Rockefeller descendant Kim Elliman) and the Catskill Mountainkeeper, exists to further the Rockefeller agenda. We’ve written about it all here. Use our search button and menu bar above to find many dozens of pieces on the subject and understand the relationships.

These stories have led others to contact us with additional information. We received some very revealing documents, in fact. They were obtained through Freedom of Information requests made to New York State DEC. They relate to the state purchase of interests in a huge block of land in the Adirondacks. The land was owned by the Finch, Pruyn and Co. paper company. It is well outside the gas region. The deal illustrates, though, how it all works in the Catskills and elsewhere as well. It tells us why the Rockefeller agenda is threatened by natural gas development.

The deal is generally described in this Open Space Institute write-up. The key  paragraph for anyone wanting to know the real story is this one:

“The agreement between DEC and TNC is history in the making,” said Open Space Institute (OSI) President Joe Martens. OSI provided a $25 million loan to TNC to help it acquire the property from Finch, Pruyn.  “It is based on sound ecological principals, common sense and open dialogue. It will ensure the protection of a vast and increasingly important biological landscape, boost local economies and maintain many traditional uses of the properties,” Martens said.

This was prior to Joe Martens becoming DEC Commissioner, when he worked with OSI, to which returned after his assignment to the state agency. (Talk about revolving door government.) Martens says OSI loaned $25 million to The Natural Conservancy to help it acquire the property. That’s only half the truth, though. The $25 million loaned by OSI appears to be the same $25 million Empire State Development (another state agency assigned to create jobs) loaned to OSI. Here are the terms: 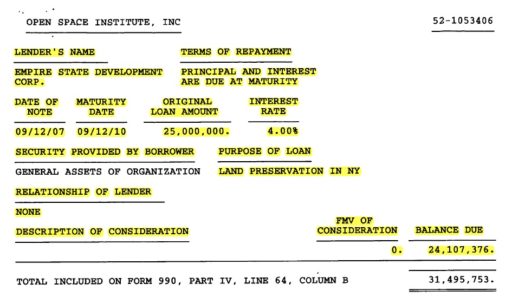 Joe Martens and OSI, in other words, orchestrated a deal where the State of New York would funnel money through OSI for TNC to acquire the Finch, Pruyn and Co. property and re-sell it to the State of New York. Why this subterfuge? If the State wanted to help Finch, Pruyn and Co. economically, when didn’t it do so directly through Empire State Development, an agency existing for that purpose? If the State simply wanted the land, why didn’t it acquire it directly? Why were TNC and OSI necessary?

Well, for starters, there was money to be made by all the players and cronies involved. Blue Wolf Capital Management, a private equity firm deeply involved in the transaction describes the deal as follows:

Finch Paper was over 140 years old when Blue Wolf made its investment in 2007, and was led by an inflexible and litigious group of over 100 descendants of one of the company’s founders. The company was and is a leader in the premium uncoated printing paper market, manufacturing over 250,000 tons per year for advertising materials, book publishing and business office uses from its single mill in Glens Falls, New York – making it an attractive investment opportunity. In 2001, there had been a bitter six-month long strike, and at the time of Blue Wolf’s acquisition of the company, it had seven collective bargaining agreements covering workers represented by five unions. The existence of a fractured ownership group, the history of contentious labour relations, and the need to implement a state-of-the-art environmental programme presented obstacles to a successful transaction.

Blue Wolf contacted officials at the United Steelworkers of America (the lead union at Finch) to satisfy concerns about our ability to work with the unions to improve operations. In addition to dealing with labour issues, Blue Wolf’s ultimate success in acquiring Finch, at a price below that established in a competitive bidding process, was based on our willingness to provide the sellers with liquidity for 161,000 acres of Adirondack Forest timberlands. We were confident in this transaction because of our ability to sell the timber to a unique buyer, one to which the family owners would have never agreed to sell to, The Nature Conservancy. As a result of this transaction, 161,000 acres of environmentally sensitive forestland was transferred to the ownership of The Nature Conservancy, and ultimately, much of it in turn passed on to New York State.

The Nature Conservancy also re-hired Finch Paper LLC to manage the land for them in a sustainable manner.

The acquisition of Finch Paper is an example of how Blue Wolf’s investment strategy works. In this instance, because of our ability to navigate a series of complicated situations, including a divided family ownership, contentious labour relations, material environmental concerns, and the sale of land and equipment, we were able to acquire a $25 million of annual EBITDA business for $52.5 million. Moreover after taking control of the company, we were able to use the goodwill generated to rationalize the company’s cost structure, create incentive plans for both management and hourly staff, reposition the brand name and refinance to reduce interest costs.

Were the OSI and TNC the vehicles used to secretly abscond with the land of a company under duress? Who is Blue Wolf Capital Management? Well, it’s the creation of Adam Blumenthal, a big-time donor to Andrew Cuomo’s last campaign, and Josh Wolf-Powers. It’s a “New York – based private equity firm specializing in middle-market investments” that “focuses on companies with complex issues, including government contracting, union relations and financial distress.” There’s no indication who all its investors might be, but we know Blue Wolf folks frequently appear together with Rockefeller entities in discussing investment opportunities (e.g., this conference at the Rockefeller Foundation’s ritzy Bellagio eco-resort).

There’s also other money to be made with these sorts of land deals. Take, for example, this run-down of one of OSI’s Catskill deals from their 2008 IRS return: 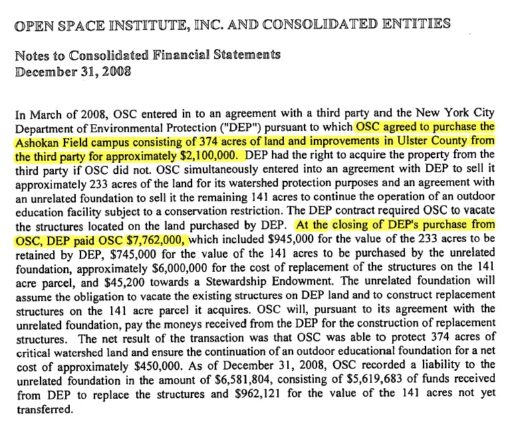 Is what it appears? Did the Open Space Conservancy (OSC), a subsidiary of OSI, more than triple its money by getting it pay $6 million for buildings that were included with improvements attached to land it bought for $2.1 million? If so, OSI is using the taxpayers as a piggy bank to make its wilderness.

And, make no mistake about it, that wilderness is for the enjoyment of the Rockefellers. Here is an e-mail a TNC official mistakenly sent to the wrong individual illustrating what he really thought about the family (emphasis added):

Next Wednesday, I am squiring some heavies into Follensby Pond. Two of them have asked for sea kayaks…

Gil Butler, is a major (millions) supporter and avid paddler. He owns a fleet of custom kevlar kayaks that he sprinkles at his homes around the world (France, Chile, South Carolina, Maine and British Columbia. Rather than have his staff drive a boat in, he asked me to arrange something sleek…

The other kayaker is Kim (Christopher) Elliman. He is a member of the Rockefeller family that owns Ampersand Park. We are having dinner and staying the night there next Tuesday and launching from Stony Creek Ponds outlet on the Coreys Road just outside their gate and then paddling down the Racquette and then up the Follensby outlet. The other lovelies will be paddling canoes…

It’s shaping up to be a real shakedown…

Shakedown may be a Freudian slip. The application submitted to the State for the acquisition of the property was, as one reader relates it, “ambiguous, vague and suspicious.” It starts out acknowledging the purchase of an easement would have sufficed to protect the resource at far less cost than fee simple acquisition. Questions about alternatives are ignored, ordinary woodland used for pulp production is treated as if it was an usually critical environmental resource and assertions were made about threats that did not exist. It had all the features of a sham document. Our reader summed it with these observations to the Governor in 2013:

The Fee Title Purchase cost the State roughly $100 million, plus ongoing expenses, whereas an easement purchase would have cost roughly $30 million, and would have generated substantial returns for both the State and local economies. The State neither can afford the purchase, nor the management costs, and is now indefinitely liable for property tax payments to the local municipalities.

Most if not all of the towns and villages in the Adirondacks adopted formal resolutions opposing the acquisition.

All of the affected family recreational clubs, 24 clubs with over 200 cabins, opposed the transaction, and these clubs contributed roughly $10 million per year to the local economy. The clubs were also extraordinary environmental stewards.

The acquisition permanently eliminates forest products industry activities, valued at $450.00 per acre per year, with an annualized lost opportunity cost of $30 million per year. The forest products companies not only managed the land to the highest standards, but protected it from invasive species, currently an imminent threat to Adirondack Forests.

Well-managed and protected forests sequester up to 400% more carbon dioxide than unmanaged forests, and the acquisition forfeits an opportunity for the State to gain financial and environmental benefits from carbon markets.

Yet, this land deal went through, no doubt because it was part of the Rockefeller agenda, just as so many land deals in the Catskills are. Finch was forced to sell to the lowest bidder. That’s the kind of arrangement the NRDC gang wants everywhere it operates and specifically why Exxon’s very valuable gas leases in the Catskill-Delaware region represent such a threat to them. Natural gas development will put land prices beyond reach for the bottom feeding gang. The Constitution Pipeline is a threat for the same reason. One also wonders whether the Rockefellers are invested in Blue Wolf Capital Management? Perhaps John Schwartz and the New York Times will take a look? If not, maybe Preet Bharara will.

6 thoughts on “The Rockefeller Agenda: It’s About the Land”