Is America governed by plutocrats who twist and turn public policy against the common man? A close look at a handful of non-profit foundations operate suggests it is.

Roughly five years ago a cordial but hard-core leftist acquaintance of mine challenged his friends (among whom I was counted) to prove America wasn’t a plutocracy. It was a bizarre challenge coming from a man who, like most people who complain about corporate America, lives off inherited wealth and uses his Harvard education to do so. I’m no fan of big-business per se, especially when it engages in the sort of crony capitalism we see so much of today (I prefer the real thing) but it’s impossible to take these trust fund occupier types seriously, so I dismissed it. It turns out, from everything I’ve learned since, he was correct. He just failed to identify who the plutocrats really are. He needed to look inward.

Yes, sadly, America has become a plutocracy, governed by the inherited wealth produced by the nation’s business titans, now held in the hands of a small clique of spoiled children who run a relatively small number of extremely large special interest foundations operating under the banner of non-profit charities. We talk about those plutocrats all the time here at NaturalGasNOW.org but we’re noticing lately that others are noticing as well.

Yesterday, our colleague Jim Willis from Marcellus Drilling News, ran a post on his site and here covering a remarkable must-read story in Philanthropy Magazine that exposed the Park Foundation’s astro-turf campaign against shale gas. Then, later yesterday, we became aware of another simply incredible article in the Financial Post by Vivian Krause who, like us, has been poring over 990 returns for some time now to discern who has been behind opposition to development of Canadian oil resources. It’s an interesting story and follows the pattern of my own education on America’s plutocracy.

Krause started out trying to understand who was behind a campaign against Canada’s salmon industry and started noticing the really big money coming into Canada from American foundations to fight not only salmon but also tar sands oil development. It opened her eyes, just as mine were opened when I noticed who was really behind the Catskill Mountainkeeper and all the other fractivist groups here in the US. It’s the same people, of course.

Krause’s phenomenal piece is entitled “Following the (primarily U.S.) money funding Canada’s anti-oil movement” and it explains how the same wealthy America plutocrats who fund groups such as New Yorkers Against Fracking and the Gasland movie series are also financing the war against Canadian oil and gas development using phony local groups  as their fronts, including First Nations groups. We, too, covered some of this in a post about the fracking battle in New Brunswick, but Krause digs deep into the relationship’s among these entities. Here are some absolutely key excerpts:

The greatest obstacle to energy infrastructure projects isn’t technical expertise or financial capital; it’s gridlock due to opposition from strong alliances between environmental organizations and First Nations and their ability to attract media attention and stop or stall development. This gridlock has been fomented by the Tar Sands Campaign, a heavily-funded international initiative launched by the Rockefeller Brothers Fund and the Tides Foundation in 2008…

According to U.S. tax returns and other documents, the Tar Sands Campaign is co-funded by the Rockefeller Brothers Fund, the William and Flora Hewlett Foundation, the Oak Foundation, the Tides Foundation, the Sea Change Foundation, the Marisla Foundation and at least a dozen other foundations – most of which are based in California. These are the big green elephants that have fueled efforts to thwart the development of Canadian oil and gas for more than a decade…

So, what’s the motivation of the funders? One of the few documents that provide insights into the funding of the climate movement is a strategy paper, Design to Win: Philanthropy’s Role in the Fight Against Global Warming. According to Design to Win, the overarching goal of voter and consumer education campaigns is to create a policy context for a massive shift in investment capital and a billion-dollar market for renewable energy. Without a negative foil of bad press about fossil fuels, it would be much harder to justify the billions of dollars that government has invested in solar and wind.

It is no coincidence that U.S. foundations are funding a multimillion-dollar campaign against Canadian energy. All of the big funders of the Tar Sands Campaign are members of the Consultative Group on Biological Diversity (CGBD), an umbrella organization created in 1987 by the U.S. Agency for International Development, an agency of the U.S. State Department. Originally, the CGBD’s purpose was to co-ordinate grantmaking in developing countries but over the years, that’s changed. Today, the CGBD has a primary focus on climate and energy-related issues and operates like an industry association for environmental funders, a back-office think-tank and collaboration hub. Membership is by invitation only. As of 2012, the CGBD’s 60 member foundations had more than US$50 billion in assets and combined annual expenditures of over US$3 billion…

During the early years, the Rockefeller Brothers Fund received funding from USAID to serve as the CGBD’s secretariat. The Tides Foundation has also been involved in the CGBD for nearly 20 years. Since the 1980s, the Rockefeller Brothers has funded more than 200 organizations involved in the climate movement. One of the many projects that it funds is the Presidential Climate Action Project, which aims to create the climate legacy of President Obama…

Each year since 2011, the Hewlett Foundation grants a total of roughly US$150 million for environment and energy-related causes, up sharply from just a few years ago. This foundation is no fan of Canadian oil. In an interview posted on its website, a former environment officer refers to the Alberta oil industry as “a nasty business” and “a major contributor to global warming.”

Over the past decade, the Hewlett Foundation has granted at least US$47 million for campaigns and conservation initiatives that seek to reduce fossil fuel development in Canada and the western U.S. That includes US$20 million granted to the Pew Charitable Trusts for the Canadian Boreal Initiative. Putting land off-limits by creating parks or conservation areas is a key strategy of the Hewlett Foundation approach to reducing fossil fuel development. Call it strategic parkification…

The same foundations that fund the Tar Sands Campaign also grant substantial funds to environmental organizations in Europe, notably the European Climate Foundation, which has received at least US$30 million from the Hewlett Foundation, Sea Change, the Oak Foundation and the Rockefeller Brothers.

In Europe, Greenpeace, the Sierra Club, Friends of the Earth, the World Wildlife Fund and the Prince of Wales’s Corporate Leadership Group are all funded to some degree by the European Climate Foundation, but the amounts these organizations receive is not publicly reported…

On a smaller scale, some American charitable foundations fund campaigns to thwart the development of fossil fuels in other parts of the world. For example, in October 2013, Tides paid US$10,000 to an Australian organization “to support a speaking tour and series of public forums in the Northern Territory which will kick-start the campaign to stop shale gas drilling.” The same organization, Lock the Gate Alliance, also received US$395,000 from Tides for unspecified purposes. Tides also funds the campaign against fracking in New York, California, Ireland and perhaps elsewhere. In Canada, Tides funded White Gold Productions to produce a video about fracking in the Horn River Basin…

Whether intentional or not, environmental activism is becoming a new form of protectionism. By exaggerating risks and impacts, activists exert such political and social pressure that major infrastructure projects can be stalled or stopped altogether, land-locking Canadian oil and gas and keeping Canada over a barrel.

Activism is important, but when it comes to budgets for influencing public opinion, the tides have changed. Environmentalists now have access to substantial resources. For the fossil fuel industries, the battle with environmental activists is no longer David versus Goliath.

If you have been following this blog or Energy In Depth, you probably aren’t surprised at a lot of this, but two things stand out. First, although the oil and gas industry takes a neutral stance on global warming and/or rightly highlights the positive impacts of natural gas in mitigating it, the favor isn’t being returned. Climate change religionists and their funders relentlessly attack natural gas, not because they believe a word of Bob Howarth’s junk science, but because they mistakenly think it threatens renewables development. The industry may not have declared war on the global warming industry, but it has surely declared war on the industry. A few folks with saner minds have seen through the futility of this strategy, but not the big money funders.

Secondly, Krause really hits home with her “strategic parkification” observation. It is precisely what the Open Space Institute is all about, along with their joint initiative with the William Penn Foundation. It’s why Carol Collier’s DRBC was so obsessed with getting the Delaware River into a blueways program and passing a Delaware River Conservation Act, and why its step-sister, the Delaware Riverkeeper, wants to upgrade the Delaware River’s stream classification to “Exceptional Value,” because these are all effective obstacles to future development, ways to interfere, slow and stop projects that might “threaten values.”

This is precisely the strategy of America’s plutocrats when it comes to oil and gas and it was reflected in discussions and papers developed by William Penn Foundation. They aim to do here exactly what they’re doing in Canada; block development by high-sounding but strategic parkification projects. And, it’s the same people doing it. I’ve done my own research of them and while the database is quite huge and the interrelationships quite complex, here are the ones we can safely refer to as the Top 24 American Plutocrats and PovertyKeepers (amounts are annual numbers from most recent 990 returns): 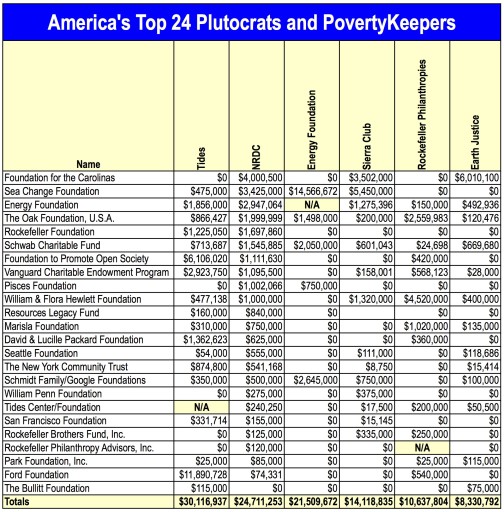 Note that not only are they the same people Vivian Krause identifies in her story but they are interconnected, providing grants back and forth and funding the same initiatives. The central role of Tides and the charitable endowment funds (Foundation for the Carolinas, Schwab and Vanguard) is also apparent. They are all essentially money launderers who allow America’s plutocrats to hide much of what they’re doing here and in Canada to keep the poverty; perhaps unintentionally in the form of the “collateral damage” the Park Foundation spoke of, but poverty keeping, nonetheless.

Finally, I must also bring still another must-read article to our readers attention. It’s by my friend Steve Everley at Energy In Depth and is titled “Fracking, Inside Climate, and Public Integrity.” It’s the sort of thing Steve and EID do so well; an in-depth detailed research report on how some of the news and Weather Channel reporting on fracking has been made. It isn’t pretty and ties right into the Jon Entine story on the Park Foundation as well as Vivian Krause’s on the Rockefellers, Tides, et al. It completes the circle in demonstrating how America’s plutocrats and povertykeepers work behind the scenes to create issues, report on them and influence public policy without almost hop one knowing who is behind it. Please read it!

What you’ll see, and what I’ve learned, is this; my hardcore leftist friend was on the money when he said American was governed by its plutocrats. It is. It’s just not who he thought it was. No, it’s the wealthy special interest foundations who create the agendas and fund them using all kinds of ruses to hide how much they spend and how they spend it.

31 thoughts on “America’s Plutocrats and PovertyKeepers”