Oil and gas drillers continuously evolve and enhance their drilling techniques. Their more recent revolutionary technique to drill horizontally along the rock formation has come to be known as “unconventional” drilling, although it’s become the conventional with the shale revolution.

To illustrate, we can compare the confectionery jelly donut to tiramisu. The common jelly donut has been replaced by the tiramisu, which is a delicious Italian dessert that coincidentally means, “carry me up” or “lift to heaven.” As this process of horizontal drilling matures, we enter the next generation of fossil fuel production. Unconventional oil and gas production has the potential to give us an “energy lift” as illustrated below: 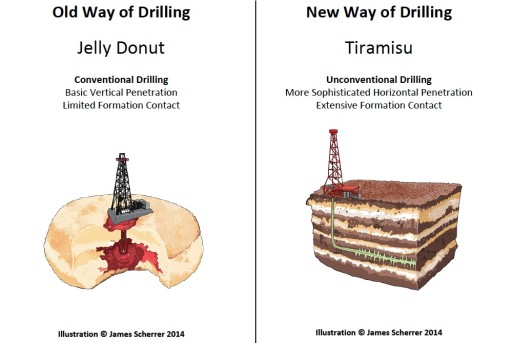 What’s So Unconventional About It?

Oil and gas resources are commonly divided into two distinct types, conventional and continuous or unconventional.

Unconventional sediments are not segregated into discrete fields but instead these continuous accumulations produce hydrocarbons in very small amounts in multi-­‐storied stacks. Often these multiple layers are drilled, perforated and completed within a single well.

It’s Time to Ramp Up Unconventional Drilling with More Infrastructure

Unconventional drilling (think tiramisu) has been going on for quite some time, but has been accelerating by technology improvements. The U.S. land market completed a record number of hydraulic fracturing (fracking) stages this year, driven by horizontal drilling and efficiencies. The rapid rate of drilling in Ohio’s Utica Shale play has midstream companies working hard to catch-­‐up with exploration and production companies that have a backlog of wells waiting to come online. Likewise, the venerable Permian Basin, where conventional drilling production peaked in the 1970s, has come back to life bigger and stronger with horizontal drilling; the technique that has spurred the shale revolution.

Here Is How We Have Gotten to Tiramisu Time

Getting to tiramisu time is the result of several oil and gas industry developments:

What this all means is this; there’s much more tiramisu that awaits.

20 thoughts on “Time for Tiramisu: Conventional vs. Unconventional”