Whatever it is, Scenic Hudson is against it. Power lines to bring in wind power, pipelines, hydro, nuclear or whatever; they want no change to their views.

Fractivism is just the latest name for the continuing war of the gentry class against change and in defense of a status quo that leaves their estates (financial and otherwise) untouched and the moat separating them from the riff-raff in good repair. We need no more proof than the latests actions of Scenic Hudson, an organization that claims to have birthed the modern environmental movement and stands athwart the drawbridges to fight off anything and everything that might interrupt a view or annoy the members.

The gentry class that is Scenic Hudson arose by fighting a pumped storage hydroelectric facility, have a 40-year hate going on for Indian Point, detest the idea of power lines needed to bring in wind and hydro power from elsewhere and absolutely loathe the idea of any pipelines to bring in gas. What they want is no change, none whatsoever, in the lifestyles to which they have become accustomed, no matter the needs of others, and they ruthlessly exercise their social privilege to ensure it.

Notice there word “advocacy” in Scenic Hudson’s logo, though it claims to do almost no grass-roots lobbying.

The commission limited the new transmission lines to replacement and upgrading of existing lines within existing rights of way, and adding new substations at several locations. It said the proposed project will provide $1.20 in benefits for every dollar it costs.

The transmission upgrade will have two primary segments. The first runs 91 miles from Oneida County through Herkimer, Montgomery and Schenectady counties, ending in Albany County. The second runs 51 miles from Rensselaer County through Columbia to Dutchess County. A related upgraded line runs 11 miles in Orange County .

The upgrade was called for as part of Gov. Andrew Cuomo’s Energy Highway Blueprint and is a key part of his strategy.

Part of Cuomo’s blueprint, of course, is to develop “clean energy” and relieve the pressure on the electric grid so as to be able to deliver more power from places just such as Oneida County, where several wind farms exist (I was peripherally involved in making the case for a wind farm there.) Scenic Hudson, though, wants none of it:

But critics questioned the need for the upgrades as well as the environmental and scenic impacts of the project.

“Scenic Hudson is disappointed the PSC has decided to move ahead with this project despite its failure to meet tests of need, fairness and emissions reduction,” said Scenic Hudson President Ned Sullivan.

Ned Sullivan made $440,748 in total compensation as Scenic Hudson’s leader for the year ending June 30, 2014, according to the organization’s latest 990 return (three other executives make over $200,000). He also has a deal to get another $500,000 upon completing his employment agreement. So, as the reader can imagine, he’s focused like a laser beam on the mission of Scenic Hudson:

Scenic Hudson works to protect and restore the Hudson River and its majestic landscape as an irreplaceable national treasure and a vital resource for residents and visitors.

Yes, it’s all about the view and by residents they mean the gentry class folks who reside along the Hudson and belong to Scenic Hudson, of course. These are the people who don’t need much help from the typical fractivist funders, although they were happy to take $25,000 from the Rockefeller Brothers Fund to fund their “LG Electronics Tower Campaign” against building a new high-rise office along the Palisades. They report only a pittance in grass-roots lobbying expense (less than $7,000 for the latest year), but that’s par for the course with these entities, who abuse the 501(c)3 rules with abandon. 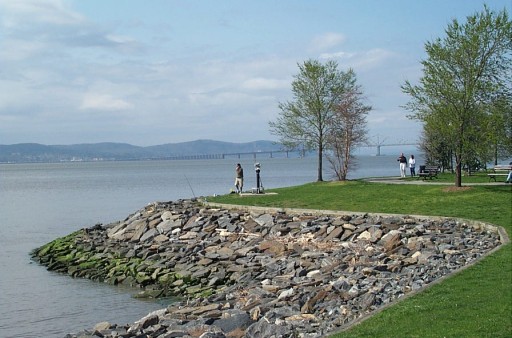 They’re also opposed to relicensing of the Indian Point nuclear facility, which is hardly a surprise, and pretty much anything else energy related, including pipelines. They’re especially opposed to the Pilgrim Pipeline, which will move crude oil to refineries in Linden, New Jersey and refined petroleum products the other direction to Albany and points between, using two 20″ pipelines placed in the New York State Thruway right-of-way. It is the logical answer to concerns about oil trains, which Scenic Hudson also opposes, of course, but no matter as nothing rises to level of protecting the view as a priority for these people.

This has been the M.O. of Scenic Hudson from the beginning and takes us back to a wonderful article from 1977 that we wrote about briefly earlier here. The article, entitled “Environmentalism and the Leisure Class” (sub-title: “Protecting Birds, Fishes and, Above All, Social Privilege”) appeared in Harper’s magazine exactly 38 years ago and offered what I consider to be the definitive description of much of environmentalism today and certainly of the fractivist version. William Tucker was the author and he absolutely nailed it. Here are some of his prescient observations about a movement created to fight a proposed renewable energy project – the Storm King pumped storage hydroelectric facility (which was never built):

…I was getting awfully suspicious about environmentalists. Their solutions lo problems had an inordinate amount of impracticality about them, more than they would have tolerated in their own liws. The environmentalists in any given area seemed very easy to identify. They were, quite simply, members of the local aristocracy, often living al the end of long, winding country roads. They had leaned the lessons of conspicuous ronsumption and had allowed a certain amount of genteel rusticity to enter their !hes. Instead of imitating Greeks and Romans, they seemed to be patterning themselves after the English gentry.

The environmentalists knew the language of energy and ecology, and could describe a future filled with windmills and with bright sunshine radiating “inexhaustible energy.” Yet one never got the impression that these people were planning lo be part of it. The “soft energy” of the future was a vision offered to persuade people lo forgo the nastier, more vulgar realities of the “hard energies” of the present…

There was another thing that disturbed me about environmentalism. That was the ‘way it always sermed to favor the status quo. For people who found the present circumstances lo their liking, it offered the extraordinary opportunity to combine the qualities of virtue and selfishness…

The environmental vision is an aristocratic one. conjured at the point where an idyllic past blends nicely with an imaginary future. It can only be sustained by people who have never had to worry much about their security…

But the message here is clear, and it should not be obscured by the facts. Nuclear energy is “hard” and “dirty” and involves nasty realities of life. Solar energy, on the other hand, is “soft” and “clean.” It is most notable for the lack of effort it promises. The future will hold no more grubby realities such as digging coal out of the ground or drilling for oil, no more handling of dangerous materials. There will be nothing to do bul sit back and watch the windmills revolve and the sun shine. The correct word for the environmental vision is not clean or soft. It is genteel…

My quarrel is with the political “environmentalism” that offers no reasonable alternatives but proposes solutions which entail delaying or abandoning present, feasible and proven technology and “waiting for” solutions thal are “soft”, “attractive.” and “just on the horizon.”

The leisure-class environmentalists will be perfectly content to leave things the way they are, regardless of the economic consequences, since, as [Thorstein] Veblen notes, “at any given time this class is in a privileged position, and any departure from the existing order may be expected to work to the detriment of the class rather than the reverse. The altitude of the class [is] to leave well enough alone.”

…The great appeal environmental solutions offer is that they can be worn like a badge of success. To say that one is an “environmentalist” or that one favors “no-growth” is to say that one has achieved enough well-being from the present system and that one is now content to let it remain as it is – or even retrogress a little – because one’s material comfort under the present system has been more or less assured…

Have you ever read a better analysis of what undergirds fractivism? I don’t believe I have. Scenic Hudson is the embodiment of the gentry class snobbery that undergirds every bit of it, notwithstanding the “occupy” type radicals who are either co-opted or hired directly to advance the agenda. What we see today is just more of what we saw with Storm King and only a fool will think these folks won’t also oppose industrial solar farms, wind farms or any other alternative energy source if it’s in the way of their genteel view. That’s what Scenic Hudson and fractivism are all about.