The Wilkes-Barre Times-Leader newspaper has, on its editorial pages, offered some of the most obtuse, biased arguments against shale imaginable and there’s a reason. It’s a case of special interest shale politics at work.

The editorial pages of the Wilkes-Barre Times-Leader newspaper recently included an editorial, one in a long line of anti-shale opinions, that bashed the approval of the Cove Point liquified natural gas (LNG) export terminal at Cove Point, Maryland. It was very effectively rebutted by Dave Spigelmyer, President of the Marcellus Shale Coalition a few days later.

The exchange is hardly unusual in itself, except, perhaps, for the economic imbecility of the Times-Leader in supposing exports are suddenly bad for the nation or wouldn’t help produce jobs for its readers and royalties for rural Northeastern Pennsylvania farmers who had seen nothing but despair ahead until shale gas came along. What is different in this case is that the Times-Leader editorial page is run by the husband of a PennFuture employee paid to fight fracking. For whom is he speaking? Times-Leader readers or the well-funded special interest for whom his wife works? What are the shale politics here?

Connections between the press and the parties they cover seldom get the attention they deserve. When I write here about natural gas issues, everyone knows my interest. I am a landowner with a lease, a consultant with industry clients and an advocate who passionately believes in the importance of shale development to the rural America where I grew up and reside. When the Times-Leader writes about natural gas issues, the common assumption (or, at least, hope) is, that while they may have observations and definite opinions, they are free of any direct financial or political connection to the issue about which they are writing. This is not the case with the Times-Leader. It’s shale politics all the time on their editorial pages.

The Times-Leader editorial page is under the direction of Mark E. Jones (pictured to right), who has been with the paper since 2008. He is apparently married to Pam Fendrock, Web and Outreach Coordinator for PennFuture, as she describes herself as married on social media and they donate jointly to certain conservation causes, to which I might add, multiple gas companies also donate. We noted this relationship in an earlier post entitled “The Fractivist Enablers in the Media” where we also pointed out this:

It’s also important for readers to know the group PennFuture is the force behind the Save the Loyalsock Forest Coalition. PennFuture is a project of the Heinz Endowments and the William Penn Foundation and is part of a “strategic parkification” campaign by those two organizations to stop development everywhere and further its own special interests.  A superb roundup on this fractivist group, can be found here.

Here are a just a few excerpts from the 2010 roundup we referenced in that blurb (please read the who thing here):

While the organization condemns the natural gas industry for its lobbying against increased and selective taxation of its investments, PennFuture has received nearly $1 million during the last five years from alternative energy companies. These companies benefited from PennFuture’s lobbying for corporate tax breaks and taxpayer-funded “economic development” funds for wind and solar projects in Pennsylvania.

And even as PennFuture solicited volunteer and member assistance to pressure legislators to pass or oppose specific pieces of legislation, the group reported to the Internal Revenue Service that it spent no money on grassroots lobbying on four of its past five tax returns.

Finally, PennFuture’s lobbying of state officials is also funded by the taxpayers. Since 2002, the group has lobbied for and received over $1 million in taxpayer money. PennFuture then continues to lobby elected and appointed officials for additional taxpayer money…

The media and the general public should understand that affluent environmen- talists and the alternative energy industry are no shrinking violets when protecting their tax breaks, subsidies and ideologies. They poured nearly $13 million over a five-year period into PennFuture—only one of dozens of environmental interest groups and lobbying firms advocating their causes in Harrisburg—illustrating the power they wield in Pennsylvania politics.

As for participation in electoral politics, just the members of the Heinz family (The Heinz Endowments) and Haas family (William Penn Foundation)—both among PennFuture’s backers—alone donated more than $220,000 to Pennsylvania candidates and political parties3 over the last 10 years. It’s not hard to imagine that their fellow donors followed suit, but unfortunately organizations that track political money do not categorize donors according to their environmental advocacy views…

That investment, however, paled in comparison to the significant cash infusion from three well-heeled Pennsylvania-based foundations: The Heinz Endowments, William Penn Foundation, and the Pew Charitable Trusts. All three foundations invest millions of dollars in organizations like PennFuture which advocate for tax- payer subsidization of less efficient and expensive “alternative” energy forms.

Don’t We Deserve Disclosure Too?

Since that report was written, the Heinz Endowments – funders of the fake health clinic in Southwestern Pennsylvania, the Clean Air Council, PennEnvironment, EarthJustice, Earthworks, the Delaware Riverkeeper and numerous other fractivist causes operating under false pretenses – has given PennFuture another $2.6 million. PennFuture owes its soul to the elitist special interests who want to stop fracking, empty out rural areas and turn over everything to their friends for use as a playground, all while propping up their own energy investments. It’s representative, Pam Fendrock, is apparently married to the Times-Leader editorial page editor, a fact that, in any other circumstance would be thought to be a conflict of interest unless disclosed. 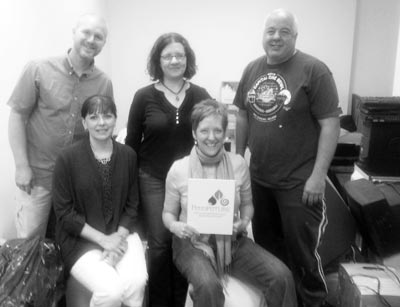 This, though, is too often how some (not all or even most) of the media works. A public official whose wife worked for a gas company could be rightfully expect to be excoriated by the Times-Leader if he didn’t disclose such a connection when voting on gas industry related matters, so why shouldn’t the newspaper be held to the same standards of disclosure, given they, too, operate in the realm of the public trust? Isn’t about time the writer of those editorials identified himself as the husband of a woman who advocates against the industry he criticizes? Don’t we all deserve to know that? Or, is it to be hidden shale politics all the time?

One thought on “The Times-Leader Does Special Interest Shale Politics”