The Delaware Povertykeeper has commissioned the most laughable, ridiculous junk science study imaginable on the economic impact of the PennEast Pipeline.

The Delaware Riverkeeper a/k/a Povertykeeper is out touting a new economic impact study, secured by the group, that claims a $13.3 to $56.6 billion negative economic impact from the PennEast Pipeline. I heard about this study a few days ago but, knowing anything from the Povertykeeper was likely to be something on the order of a Tarot Card reading, I paid little attention. Concerned readers, though, more or less insisted I do so. I have now reviewed it and can tell you it was well, worth reading for the laughs.

The Povertykeeper hired Key-Log Economics, LLC, a consulting firm headed by a former Wilderness Society guy who apparently specializes in fighting energy development projects. Their PennEast report is entitled Economic Costs of the PennEast Pipeline: Effects on Ecosystem Services, Property Value and the Social Cost of Carbon in Pennsylvania and New Jersey.

If you’re like me, you’re already getting an idea what a joke this piece of junk science this report really is. You’re asking yourself what in the world “ecosystem services” are. You’re also speculating why the report talks about “social costs” and not real costs. I do a lot of economic impact work in my own consulting business so I’m more than willing to cut other consultants a break when it comes to making estimates that depend on assumptions, but this report has less substance than a Madonna political speech. It’s sophistry and nothing more. I hope the Povertykeeper paid big bucks for it. They certainly get a lot of big bucks from the William Penn Foundation and others.

The first thing I looked for in reviewing the report was a table summarizing the economic impacts. There was no such table; only a summary page of text that threw around a lot of numbers without really illustrating how they worked together. It’s not hard to construct such a table from the data, though, and here’s my version: 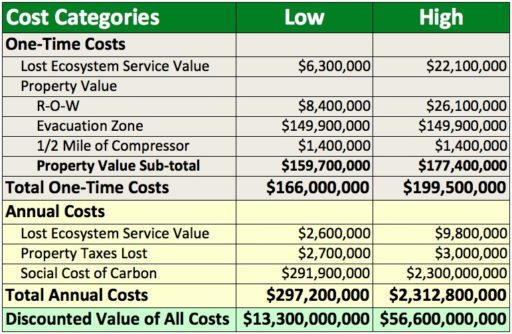 Notice where the big money is. It’s in the discounted value of the “social costs of carbon.” It is, of course, utter nonsense, but let’s give it a whirl anyway shall we? The authors describe it as “a comprehensive estimate of the economic cost of harm associated with the emission of carbon.” Notice it says “emission” and not transport and hold that thought. It also says the Council on Environmental Quality has recommended agencies consider this type of analysis to evaluate differences between alternatives. It then goes on to say the PennEast Pipeline will “transport 401,500,000 dekatherms annually,  contributing to an equivalent of 21.3 metric tons of CO2 emitted per year.

Now, let’s think about this a bit. Since when does the transport of carbon mean the same thing as emissions? Electricity, after all, transports carbon, too, given that most of it is made from coal or natural gas. A thinking person will quickly realize these semantic games are intended to confuse matters such that whatever energy proposal is up for consideration at the time is guilty of carbonizing the world, given that most energy must be transported. And, don’t think there isn’t carbon associated with the transport of solar, wind and hydroelectric energy. There’s a whole lot of carbon involved in manufacturing units and transporting the energy. One can’t build a solar system or a power line without using trucks and backup systems that run on fossil fuels.

This illustrates another problem with this junk science study; the entire “social cost of carbon” concept is meant to evaluate alternatives. The authors have done nothing of the kind. They’s produced no comparison data to look at different energy options, different transport options or different anything. They’ve simple ginned up some some wild numbers to attack the PennEast Pipeline, nothing more.

Moreover, they haven’t even explained how they calculated the “social costs of carbon.” There’s a discussion beginning at the bottom of page 33 that generally explains how they want about it, but we’re never shown the actual calculations or numbers. All we know is they say they used “EPA estimates based on the average of impacts from three assessment models.” From this they concluded “the cost to society of the carbon transmitted through the PennEast Pipeline would total between $12.9 and $56.0 billion.

That’s quite a wide range suggesting quite high BS range, but putting aside my snarky attitude, shouldn’t at least we be given the average cost per metric ton? It’s relatively easy to calculate and ranges from $600 to $2,657, but that’s the supposed social cost of the carbon, not the transport, and therein lies the con game at work here. Does anyone doubt the authors would say the same costs apply to production or consumption of the carbon? They would certainly would because their objective is to trash oil and gas. They’ll count the costs every way they can and as many times as they can. What it means is that the numbers are nothing but abstract speculations worthless for evaluating anything, let alone the missing alternatives.

This isn’t all that’s wrong with this study not worthy of the name. The “ecosystem services” costs are likewise meaningless without evaluating alternatives.  The report does look at alternatives but only one and in the sense of land use, not energy. Here’s the chart the authors use to explain. See if you can figure it out: 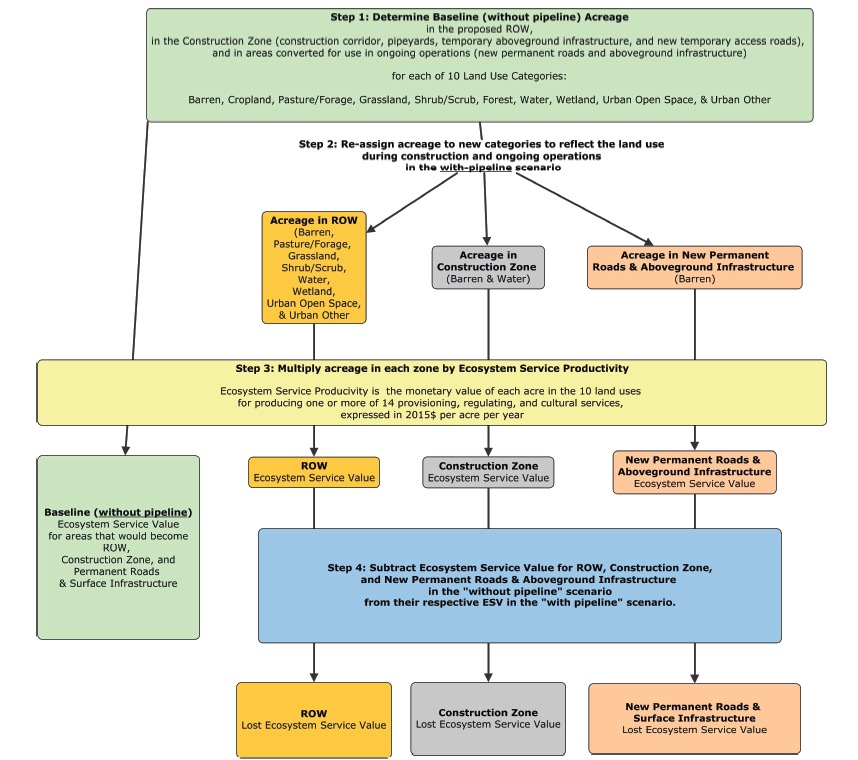 I know it looks complicated and sophisticated but all you need to know is this; it assumes the only alternative worth considering is doing nothing — ever. It is a phony exercise designed to dream up the vague ecosystem values of whatever now exists and compare it to the costs of one type of development in the form of a pipeline. No consideration is given to the value of humans and their needs in the calculation (things like affordable heat) and nothing is dome to evaluate what might happen absent the pipeline (good or bad) or what the ecosystem costs of other energy options might be. Solar and wind farms are controversial, too, but you wouldn’t know it from this method. There’s, likewise, no consideration of the positive wildlife impacts of pipelines. They aren’t “barren,” at all; they’re teeming with turkeys, deer, rabbits and Golden-Winged Warblers.

Then, there are the property values impacts which, in this case, are assumed to be as much 25% negative and extend as far away as one-half mile from a compressor station. The evidence provided for this is almost all anecdotal although some data is presented from realtor surveys (see pages 24-25). That there can be an impact is certainly a reasonable assumption, but properties are also arguably devalued by solar and wind farms, power lines, highways and other infrastructure needed to keep us warm and provide the comforts of modern living. It’s interesting, though, that the impacts seldom rise to what was expected prior to construction. That’s why this relatively new construction has taken a few hundred feet from a long-standing Tennessee Gas compressor station in Susquehanna County, for instance: 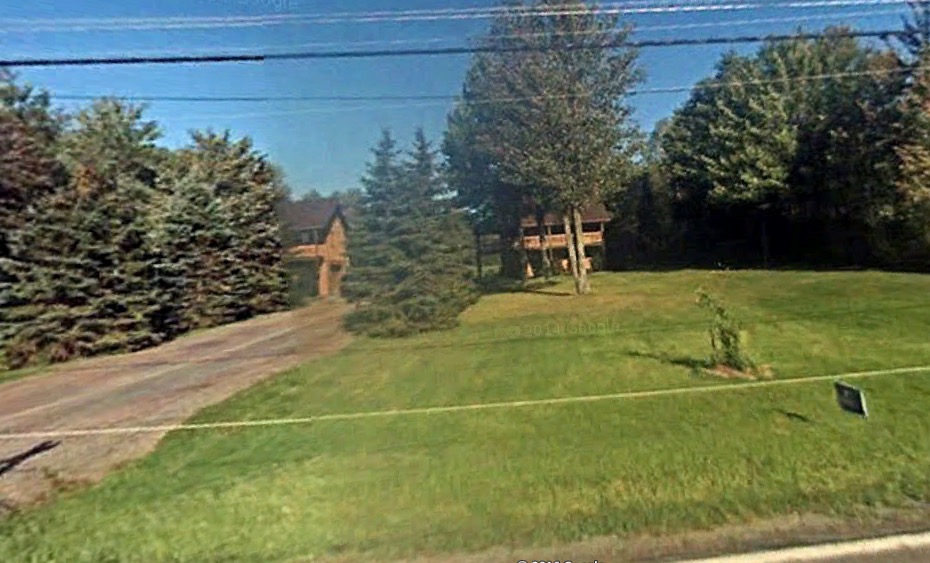 We’ve shown numerous pictures here, of course, showing pipelines next to new houses, through farms and estates and in the middle of communities. None of this is to suggest there can’t be property value impacts but I built my house within one-quarter of a major pipeline (the same one that goes through Susquehanna County) long after the pipeline was built and have expanded it and added property since then. It has never entered my mind that the pipeline had any impact on property value. Why? Because it’s there and I’m not engaged in speculating over far-fetched fears. I’m dealing with reality.

Reality is not the subject of this junk science report produced for the Povertykeeper, though. They want something with which to bash the industry. What they got though is laughable.