There’s a lot of New Jersey nonsense going on these days as enviros fight solar energy and destroy forests while fighting pipelines that will help clean the air.

I’ve long felt the New Jersey enviros who oppose us developing our natural gas resources are clueless idiots. Any shred of doubt is now gone. Three news items I came across in the last 24 hours have confirmed my suspicions. Two of the prominent organizations fighting natural gas development in my backyard have demonstrated what I can only describe (kindly that is) as New Jersey nonsense. One is fighting solar energy and the other is tearing up the forests to make rattlesnake habitat. Meanwhile, they both oppose pipelines that are needed to deliver gas to replace coal and help clean the air. It boggles the mind, this New Jersey nonsense. 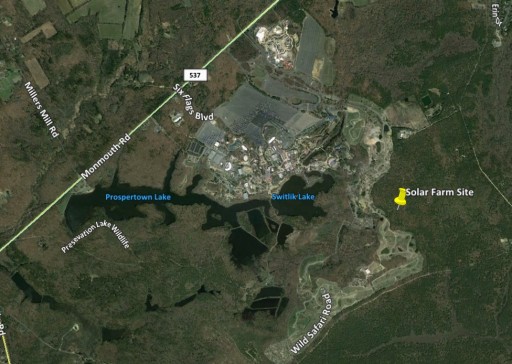 The first news story catching my attention was one in the EnviroPoltics Blog and NJ Spotlight. It stated Six Flags was holding off clearing trees for a proposed solar farm on their Great Adventure amusement park. Why? Because the Sierra Club, the New Jersey Conservation Foundation, Environment New Jersey and other fractivist groups funded by gentry class foundations don’t want solar power either when it’s in their backyard. Their opposition isn’t new. NJ Spotlight (itself funded by the William Penn Foundation) reported this last year (emphasis added):

It was a conflicted Earth Day for New Jersey’s environmental activists, who took the occasion to criticize something usually dear to their hearts: solar power.

“Trying to say that taking this forest away and replacing it with solar panels is good for the planet is the most ridiculous thing I’ve heard in 35 years as a scientist,” fumed Emile DeVito of the New Jersey Conservation Foundation, standing on a road near the edge of the Six Flags Great Adventure amusement park in Jackson Township.

Six Flags plans to cut down 18,000 trees on 90 acres for one of the most ambitious renewable-energy projects yet: a 21.9-megawatt solar array that on most summer days will make the park energy independent.

Working with KDC Solar LLC of Bedminster, Six Flags says the installation will deliver the equivalent energy needed to power 3,100 homes without the carbon emissions of fossil fuel sources. That’s equal to about 230,000 tons of carbon over 15 years — a net bargain in exchange for 9,600 tons of carbon the trees would remove from the air in those years, the company claims…

Instead, environmental groups want Six Flags to use its parking areas for solar power — mounting solar panels in cantilevered panels above parking spaces, like the massive 28-acre, 8-megawatt solar carports at Rutgers University, now the largest such installation in the nation.

“We strongly support solar power. This could be a landmark example of a solar success story by using the park’s mammoth parking lots. Instead it’s a tale of a company choosing to chop down 90 acres of forest when they don’t need to,” said Doug O’Malley of Environment New Jersey.

Six Flags president John Fitzgerald said company officials considered the parking-lot alternative, but need all the space they have now for parking and special events, and possible future expansion.

Then they worried about safety, with visitors walking among humming direct-current inverters collecting electricity from the panels.

“Tens of thousands of visitors come to Six Flags every day and use the parking lot, including many children and young adults. It would be imprudent to allow park visitors access to solar arrays set over such a large and widespread area,” Fitzgerald said in a prepared statement.

Upfront costs are a big factor too for Six Flags. With the cost of steel pylons and construction, parking-lot solar panel projects can cost between 20 percent and 50 percent more than a ground-level installation in an open field, according to industry sources.

What I thought I learned from this was that New Jersey enviros were against not only natural gas development but also any other development if it destroys trees. Better to spend a fortune we don’t have putting solar overhead where it will endanger other people below seemed to be the message. This bit of New Jersey nonsense was hardly surprising. New Jersey enviros, like so many others, are just New Jersey NIMBYs. The enviros crowed about their solar farms in 2014 but as things got closer to home–to their precious trees–they started signing a different tune. Trees are everything according to Emile DeVito:

But, there was more, because a little while later I learned the New Jersey Conservation Foundation, a big opponent of the PennEast Pipeline, for example, and the folks who said taking forests away “is the most ridiculous thing” don’t seem to mind when it’s their project. NorthJersey.com reports the following:

An environmental group failed to obtain required state permits when it killed trees on 15 acres of a public forest in Passaic County to create habitat for the golden-winged warbler and timber rattlesnake, two endangered species in New Jersey.

The New Jersey Conservation Foundation recently received a warning letter from the state Department of Environmental Protection explaining that it should have applied for prior approval from the agency for the project in Tranquility Ridge County Park, in the Highlands communities of Ringwood and West Milford.

Such approval is required when disturbing more than a quarter of an acre of forest habitat within the Highlands region, an area under special state protection to prevent degradation to the region’s water supply…

…the issue renewed simmering disagreement among area environmental groups about how to conduct forestry management projects on public land, including a much larger project on Sparta Mountain in Sussex and Morris counties that has come under intense criticism from some residents and environmentalists.

Tranquility Ridge is a 2,110-acre forest with four miles of trails that attract hikers from North Jersey and New York State.

The DEP warning was issued even though DeVito designed the project with help from several DEP staff biologists. DeVito said he and the biologists even contacted the DEP’s land use compliance bureau to see how they could craft the project so as to avoid the need for permits, which – even outside the Highlands region – are required for work in wetlands areas or near protected streams that flow into a reservoir.

“It never occurred to anyone that the Highlands Act has this quarter-acre limit on disturbance – including the DEP people,” DeVito said.

…In addition to removing invasive plants and replacing them with more than 17,000 specimens of native grasses, shrubs and wildflowers, the project involved killing most of the trees on 15 acres in the 2,110-acre park, to leave only 15 percent of the canopy in place in that area. On an additional 30 acres, the Conservation Foundation removed about 30 percent of the canopy, to create small breaks that let sunlight through to the forest floor.

Instead of the sort of mechanized clear-cutting proposed for the larger project at Sparta Mountain, the Conservation Foundation girdled trees – letting them die in place and not removing them, DeVito said. In upland areas away from wetlands, they applied an herbicide to trees, and in more sensitive areas, such as wetlands, they used a chain saw to cut into the trunk.

The DEP recently conducted an on-site inspection after receiving complaints from the New Jersey division of the Allegheny Society of American Foresters, a professional society for foresters in the state.

“I don’t know how a project that was supposed to have done a lot of good could have gotten to this point and created such significant harm,” said Steven Kallesser, chairman of the foresters’ group.

“Some of the trees that were girdled are still alive while many oaks, which ecologically are of the highest value, were all killed,” he said.

“The way it stands, it’s a seriously degraded forest,” Kallesser said. And yet, “there’s still a ton of shade,” defeating the point of opening the area to provide more light so smaller understory plants preferred by the warbler and rattlesnake can thrive. “They’ve done damage but haven’t created any benefit,” he said.

…Another environmental organization also complained about the project – the New Jersey Audubon Society. That group has proposed a similar but far larger project to clear-cut patches of state forest on Sparta Mountain totaling up to 210 acres over several years, also in a bid to generate the low-growth vegetation preferred by the golden-winged warbler.

The Audubon Society created a forest stewardship plan describing the project, and received extensive input from the public.

The plan has generated intense debate, and critics have said it has many flaws, including the use of logging equipment that would compact the soil, destroy rare native plants and exacerbate erosion.

The Emile DeVito commenting about how it never occurred to him there was a limit on disturbance is the same Emile DeVito who cried foul about cutting trees to do solar even though the solar project would produce more carbon reduction than the loss of the trees. What it shows me is how completely disconnected these people are from reality. They’re not against cutting trees to help snakes, only to help people. They’re not against solar either, unless it’s economical, of course. 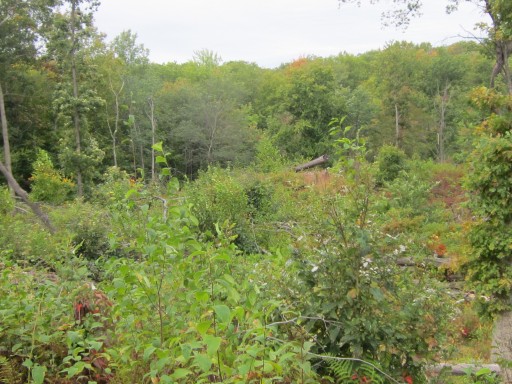 “Golden-Winged Warblers occupy regenerating clear cuts, wetlands, or utility right-of-ways in northwestern New Jersey, where they can still find the resources that they need.” Click photo to learn more.

What’s really happening, of course, is that their ideology is tripping over itself. They can no longer keep it all straight. They just know in their heart they’re against everything that improves the human lot. They’re willing to help the Golden-Winged Warbler and rattlesnakes by cutting down trees, though. But, a pipeline proven to be perfect habitat for the Golden-Winged Warbler and that delivers gas to replace coal (the third story to which I’m referring) is another matter, even though it produces several times the carbon reduction benefits of any solar farm. These people haven’t got a clue. It’s just more New Jersey nonsense.