Some people are serious about the environment and others are just looking for a cause or an excuse to promote their favorite political ideology. The latter is typified by an article that appeared in Philly.com early last year about  a protest of a coal to gas power plant conversion in New Jersey. The protest was organized by the Sierra Club of New Jersey and the sheer idiocy of what they were up to may be discovered in the first two paragraphs:

UPPER TOWNSHIP, N.J. A group of environmental advocates marked Earth Day on Tuesday by demonstrating against a plan to convert the B.L. England coal-fired electrical generation plant to gas, saying a new plant was unneeded and would be a new source of pollution.

Jeff Tittel, director of the New Jersey Sierra Club, called the site “ground zero” and “the most important location in New Jersey when it comes to protecting the future of the environment.”

Jeff Tittel, of course, isn’t at all interested in any kind of math. He’s an ideologue who boldly goes where no reasonable person would dare, driven by a utopian dream and a wad of money from elitist special interests who see opportunities to profit off those utopian schemes or who are, perhaps, Lex Luther caricatures simply determined to remake the world. The rest of us have to live in the real world. 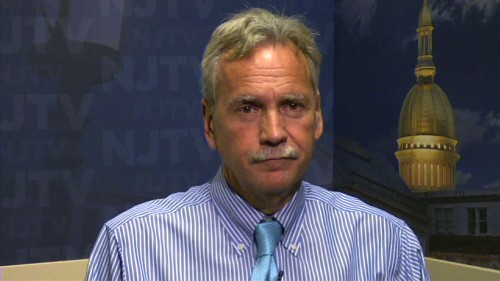 Tittel, nonetheless, continues to get news coverage, working hand in hand with the Delaware Riverkeeper, the Clean Air Council and other special interest shills in fighting anything remotely connected to delivering the energy they use every day. He, like the others, prefers instead to espouse a religious-like belief in a renewables future that doesn’t come close to addressing real energy needs or making a meaningful difference in environmental quality.

Perhaps an update from the Realville, as our guest blogger Dick Downey calls it, is needed. Somehow, I doubt any amount of data would ever convince a guy like Tittel of anything, but others may be interested in just what a coal to gas conversion means in terms of air pollution.

Fortunately, we have the data and it’s nothing less than stunning. All that’s needed to explore it is this link to the Pennsylvania Department of Environmental Protection (DEP) facility emissions database. From this, it’s incredibly easy to chart what’s really making a difference in delivering cleaner air, and it’s not the Sierra Club or its silly protests that so captivate some in the media. The charts tell the story, comparing emissions from the year 2000 when UGI’s Hunlock Creek Energy Center in Luzerne County was a 44-megawatt coal fired plant to 2013 after upgrade to a combined cycle natural gas powered plant with more than twice the capacity. 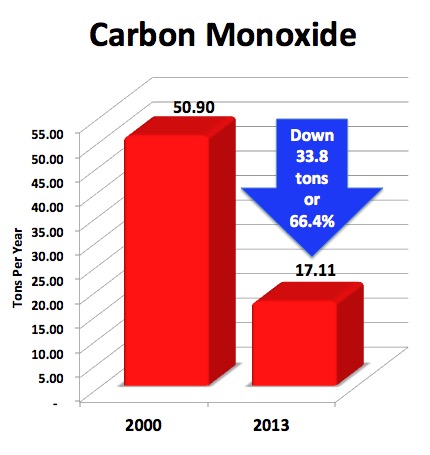 Carbon Monoxide emissions have decreased by two-thirds through conversion to natural gas. That’s cleaner air, but it’s just the beginning of the good news. Here is the story on Volatile Organic Compounds (VOCs): 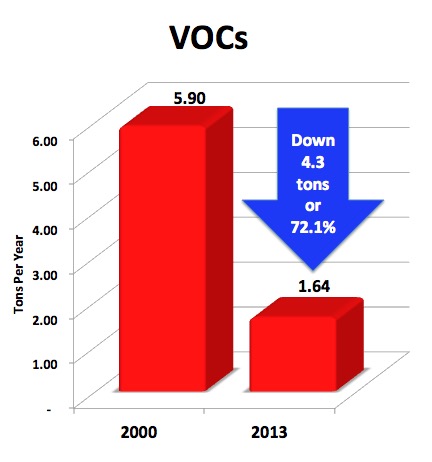 Again, there is a major reduction. And, here’s Particulate Matter under 10 microns: 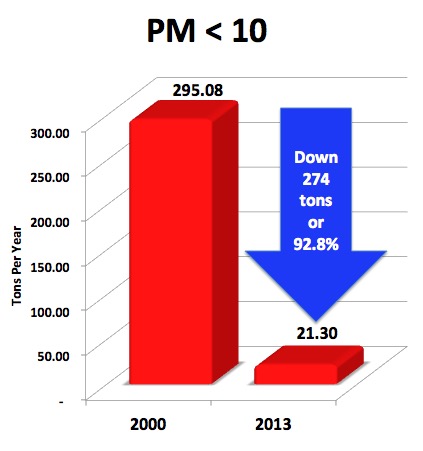 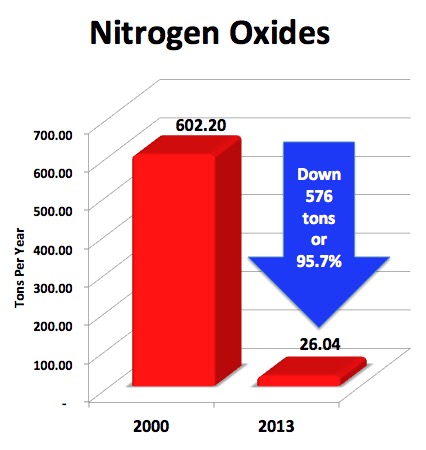 And, here’s Sulfur Oxides, the biggest improvement of all: 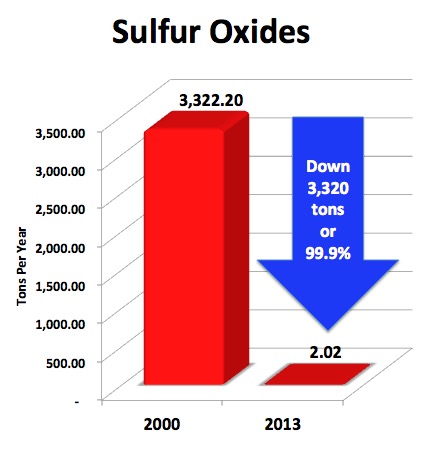 Finally, let’s look at Carbon Dioxide (CO2), that big bugaboo for folks worried about global warming. We don’t have historical data on this one for Hunlock Creek, but we do have 2013 data for both it and a nearby comparably sized coal fired plant at Panther Creek in adjoining Carbon County (note the irony) and see the difference: 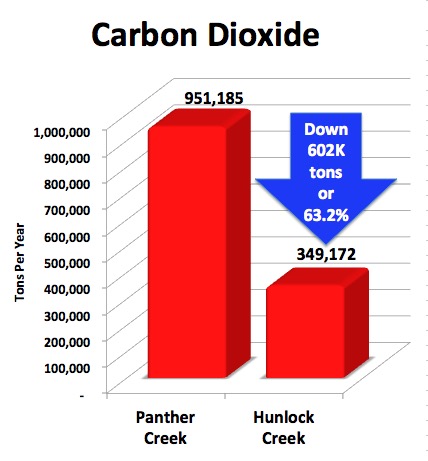 What all these charts demonstrate is the absurd logic or, more accurately, the irrationality and lack of any logic on the part of fractivists such as Jeff Tittel, who want everyone to focus on the 2 tons per year of Sulfur Oxides a gas plant produces, rather than the 3,200 tons a conversion to gas eliminated in the case of Hunlock Creek. They want to pull our eyes away from the 99.94% cleaner air delivered toward the 0.06% remaining. But, the latter means nothing in the absence of the former and calling what’s left “pollution” is a rhetorical  twist of reality with the singular purpose of selling an ideological position that has nothing whatsoever to do with cleaner air, but, rather, politics of the most devious, yet crude, sort.

A lie, in other words. The truth is this; if you want cleaner air, then natural gas is the way to get it.