A new PennLive shale series, timed for political impact, shows why mass media operates with ever declining trust from a jaded American public sick of it all.

Americans’ overall trust in mass media, according to the Gallup organization, has declined from 55% in 1999 to 40% in 2015, tying all-time lows set in 2012 and 2014. Worse yet, the percentage of Americans who say they have no trust whatsoever in the mass media has quadrupled from 6% in 1972 to an all-time high of 24% in 2015. It’s not hard to wonder why after reading The Harrisburg Patriot-News connected PennLive shale series entitled “Pa. regulators fail to protect environment during Marcellus Shale boom” that launched this week. It is a politically timed attack on the one industry that lifted up Pennsylvania during the economic recession. 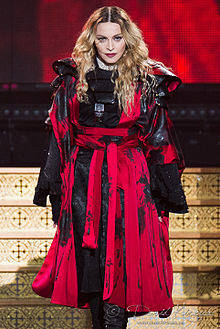 Why are we using a picture of Madonna at Rebel Heart Tour? Read below.

PennLive is the on-line version of the Harrisburg Patriot-News, one of numerous media outlets of Advance Publications, a conglomerate owned by the Newhouse family. Among its myriad other publications are the Cleveland Plain Dealer, The New Yorker magazine and Vanity Fair. They also own nearly a third of the Discovery Channel. The two Newhouse brothers at the helm of this ship, Samuel and Donald, are worth a combined $22.5 billion and represent the 45th and 46th richest individuals in the US, according to Forbes.

The editor of the Harrisburg Patriot-News until May of 2012, in fact, was David Newhouse, a family member. The family overwhelmingly supports Democratic Party candidates and in 2014, PennLive endorsed Tom Wolf in both the primary and the general election, offering this reason, among others:

“We are encouraged by Wolf’s proposal to impose a 5 percent severance tax on Pennsylvania’s burgeoning Marcellus shale natural gas drilling industry. The Democrat has said his plan would raise about $700 million.”

It’s hardly surprising, therefore, the PennLive shale series is released at a critical point in the Pennsylvania budget battle. What better time to unleash an attack on the gas industry then when your man Wolf is losing badly and needs to demonize his severance tax opponents, after all. Plus, it’s an opportunity to grab some quick attention for your failing newspaper, which has lost so much circulation it’s now reduced to publishing three times a week.

Equally unsurprising is the shrill tone of the attack, which is anything but balanced news coverage. The headline is bad enough but five sentences into the opening post we read “the scales tipped too far in favor of industry” followed by the accusation of “systemic failures on the part of state regulators to enforce environmental, health and safety standards” and an absolutely absurd assertion “operations went virtually unregulated for years.” The evidence? Well, we have some quotes from a Democrat Auditor General looking to run for Governor himself someday, some old phony issues raised by fractivist outfits and this (emphasis added):

But that promise isn’t enough for Pennsylvania residents such as Denny Higgins, a Butler County resident who hasn’t had a permanent source of water since it turned orange more than four years ago.

He maintains the drilling activity of Rex Energy is to blame, though no court ruling nor DEP testing has proven that to be true.

Higgins and his neighbors have joined in a lawsuit against the company, and he’s given up on asking the DEP for help.

“After four years, you lose hope. There’s no hope,” he said.

Higgins wants the new DEP secretary and governor to see how he lives, offering Quigley and Wolf an open-ended invitation to his home.

“I’m living worse than some third-world countries. Water’s your main necessity of life. I’m 44 years old – this is embarrassing to say – I get a shower every five days,” he said.

Sometimes Higgins gets a shower in a janitor’s closet at his maintenance company.

Other times, he takes his family to a park in Slippery Rock “to get the government’s free water.”

“You know how embarrassing it is to load up everybody in the car and go to Moraine State Park to get a shower?” Higgins said.

This PennLive investigation shows the negligence that has encumbered three administrations and the ripple effect of that neglect.

Get that? DEP and the gas industry are presumed guilty until proven innocent. The fact there is no evidence or court decision is irrelevant in the mind of reporter Candy Woodall . Failure is someone named Denny Higgins saying you failed and one gullible journalist wanting something to fit the template – nothing further required. Read the titles of the related and upcoming posts and there’s obviously a lot more of the same to come with nary a word about Pennsylvania’s STRONGER record compared to other states, the documented improvement in air quality and lack of impact on water quality or so much as a sidewards glance at the credibility or motives of the industry’s and DEP’s accusers.

Given the obvious motive of this PennLive shale series and the general empathy for fractivists (or is it just laziness?) among modern day “journalists,” little of this unexpected. Still, the tone used by Woodall and company in this case hints more of desire to write a script for the next Bonfire of the Vanities movie than anything else. It’s a bad case of overacting, too. Sort of like Madonna in “Who’s That Girl,” a widely panned film of several years ago in which she demonstrated “an obvious problem with controlling that energy.” Woodall is a great admirer of Madonna, so perhaps that explains it. Indeed, this is some of what she wrote earlier this year about Madonna:

You are the woman who made a mockery of the wedding dress, made the cone bra famous and taught us to vogue. Of course you’re wearing fishnets and thongs in public when you’re 56…

Don’t put it away now, Madonna. Your awesome is showing.

I’ll leave it to readers to judge the awesomeness of Madonna but, as for Woodall and this PennLive shale series – well, not so much. Woodall and PennLive don’t have a clue. There’s no awesome to be found at PennLive and if you doubt me on that, check out this exchange of Tweets as someone does their best to educate the material girl reporter: 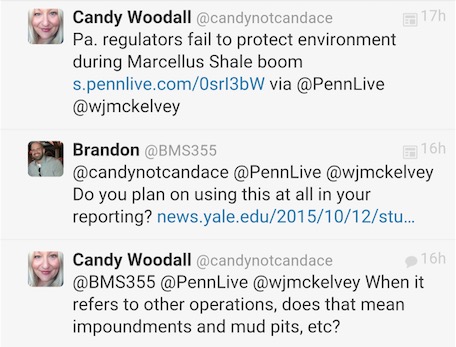 The link someone named Brandon is sending her, of course, is to the Yale study that just found hydraulic fracturing doesn’t contaminate groundwater aquifers. The headline to the Yale article is as follows (emphasis added):

Woodall is asking what these “other [surface] operations” might be. Give here credit: she at least opened the link but, unfortunately, she didn’t read beyond, or didn’t understand, the first two sentences of the article that followed, which said this:

The presence of organic compounds in groundwater aquifers overlying the Marcellus Shale is likely the result of surface releases from hydraulic fracturing operations and not migration from gas wells or deep shale layers, according to researchers in the lab of Desiree L. Plata, assistant professor of chemical and environmental engineering at Yale.

Is this that hard to understand? Is it that difficult to appreciate “surface water containment ponds” encompasses “impoundments and mud pits”? Or, did the material girl reporter simply read the headline and nothing else, quickly deciding this very recent study contradicting the entire thesis of her PennLive shale series didn’t fit the template? Does she realize this study refutes everything Denny Higgins told her, everything she wants so desperately to believe? Or, is she deliberately playing dumb to have an excuse not to read the rest of Yale study or use any of it? I’m guessing it’s all this but summed up by these lyrics from the real Material Girl:

Some boys romance, some boys slow dance
That’s all right with me
If they can’t raise my interest then I
Have to let them be

No, the Yale study just didn’t raise Candy Woodall’s interest. She had her mind made up and had to let it be. But, Madonna’s cone bras; that’s worth highlighting. Such is “journalism” at PennLive. Don’t expect much from this series other than a lot more of the same. No wonder Americans no longer trust the media.