Although fractivists are fond of labeling those of us who advocate for natural gas as climate change deniers, the real deniers are those who pretend natural gas can’t help.

There were some rather amazing comments on this blog the other day. They reveal the degree to which fractivists who love labeling us as climate change deniers will go to deny the contribution of natural gas in reducing emissions. It’s stunning, in fact, how far these real climate change deniers will go in ignoring the fundamental facts and rules of logic in defending what is clearly ideology, not science, in their own heads.

I’m talking about a handful of comments made by always angry artist James Barth, who seems, for all the world, to be in a state of perpetual agony and torment that natural gas advocates like me even live on the same planet with him.  Here’s his basic argument from one of his latest bursts of dark energy: 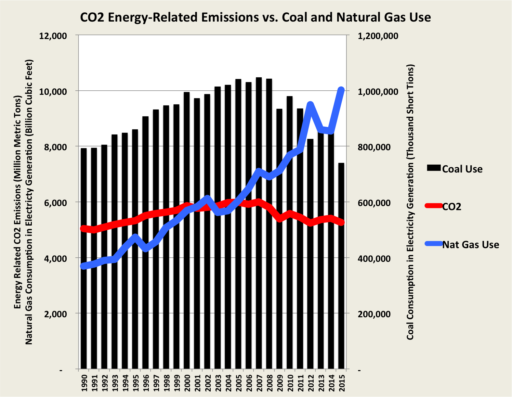 There’s no denying it; CO2 emissions began declining when natural gas became a serious substitute for coal in electricity generation; as the former accelerated big-time 2008 and the latter began to decline. The trends aren’t independent; rather, they complement each other as in yin and yang, left and right and E = mc².

The EIA analyzed the data itself here, producing the following three charts illustrating  the point in additional ways. The first demonstrates how the volume of CO2 emissions has declined, compared to the mix of sources. The EIA notes “a shift in the electricity generation mix, with generation from natural gas and renewables displacing coal-fired power, drove the reductions in emissions.” 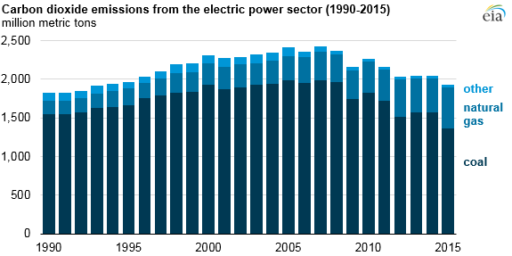 The next chart (a compilation of three mini-charts) further notes how “natural gas consumes less fuel per unit of electricity generation” making it more appealing as a substitute for coal and “emits less carbon dioxide per unit of electricity generation” giving natural gas a multiplier effect, if you will, in terms of CO2 emission rate reductions. That is to say the more natural gas is substituted for coal, the less fuel is needed and even less CO2 is generated. 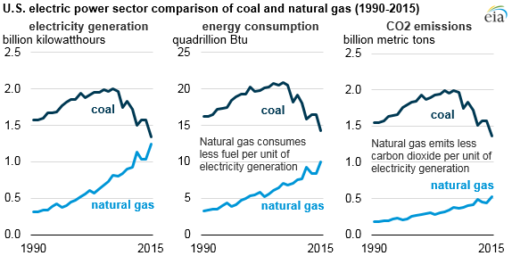 The EIA sums it all nicely with this paragraph:

Electricity generation and its resulting emissions are primarily determined by the available capacity and relative operating costs of the different technologies. Recent capacity additions have favored natural gas and renewable energy, while retirements have been mostly coal units. In recent years, the drop in natural gas prices, coupled with highly efficient natural gas-fired combined-cycle technology, made natural gas an attractive choice to serve baseload demand previously met by coal-fired generation. Coal-fired generation has decreased because of both the economics driven by cost per kilowatthour compared to that of natural gas and because of the effects of increased regulation on air emissions.

It also offers yet another chart to show what’s happened and how natural gas has substituted for coal, growing from an 18% share of electric generation in 2005 to a 32% share in 2015, despite Barth’s contention coal has simply declined on its own. Coal went down by a 17% share and natural gas went up by a 16% share, but there’s no relationship, says Jim Barth.

Jim’s one of a unique class of fractivist climate change deniers who don’t deny climate change, but refuse to accept the most basic undeniable facts about CO2 emissions and how the US has pioneered the most effective path to reducing them quickly in contrast to places such as Germany, the hallowed climate protector that just happens to be burning more coal, not less.

Jim also seems blithely unaware of all the coal to gas plant conversions that have taken place across the country, such as the Hunlock Creek Energy Station I profiled a couple of years ago, where CO2 emissions plummeted as energy production was more than doubled, not to mention up to 99.9% reduction in other emissions. Such conversions and replacements on-site or elsewhere have dramatically reduced CO2 emissions as this study published in Earth’s Future reveals (emphasis added):

As a result of the increased use of natural gas, CO2 emissions from U.S. fossil-fuel power plants were 23% lower in 2012 than they would have been if coal had continued to provide the same fraction of electric power as in 1997…

Because the CO2 emission intensity of coal is much higher than that of natural gas, particularly with combined cycle technology, a significant fraction of this decrease in CO2 emissions can be attributed to the switch from coal toward natural gas…

Over the last decade the increased use of natural gas power plants with combined cycle technology has significantly decreased the atmospheric emissions of CO2, NOx, and SO2 associated with electric power generation in the United States. Further reductions in these emissions can follow by converting a larger fraction of the U.S. electric power production to natural gas, and by ensuring that all natural gas power plants are equipped with the latest combined cycle technology. These results illustrate some of the advantages to both climate and air quality that follow the switch from coal to natural gas.

That about sums it up, doesn’t it? Anyone serious about reducing CO2 emissions cannot deny the role of natural gas development in accomplishing that goal. Those who do so are climate change deniers of a different sort; the kind who oppose real solutions in favor of ideological fantasies and utopian dreams. Yes, fractivists are the real climate change deniers and they’ve not yet even begun to spin. Just wait and see how they deal with this; carbon capture and reuse in gas plants.

P.S. It appears Jim Barth has trouble understanding the EIA data and conclusions as well as my graphs, so I’m including the source numbers below, which speak for themselves. No amount of cherry-picking by Jim changes them. 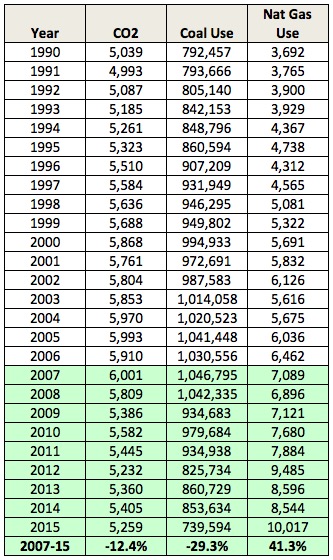 Note that CO2 emissions and coal use peaked in 2007 and it’s what’s happened since that matters.

32 thoughts on “The Real Climate Change Deniers Are the Fractivists”