Northeast air quality has dramatically improved at the same time as natural gas consumption has similarly risen and it’s no coincidence, of course.

A few days ago the EPA came out with a celebratory website of sorts marking the great improvements in the nation’s air quality since the Clean Air Act was enacted. It’s not your typical government report and is well worth perusing. The facts about how much cleaner our nation’s air is today are nothing less than startling; in a good way. Energy In Depth took notice of the report and posted a very nice piece noting the gains made while natural gas use was rising, a fact not much mentioned in the report because, no doubt, the EPA wants the credit—all of it. The EID analysis is also worth your time. But, there’s more. 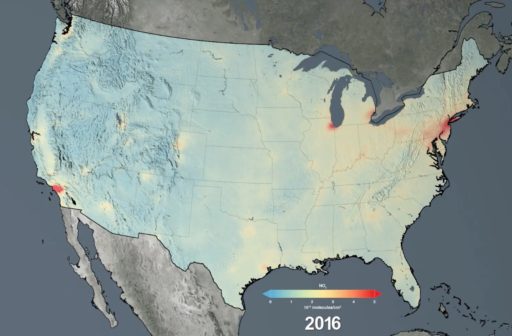 I decided to take a dive into the EPA data with a view to what’s happening at the epicenter of resistance to the shale revolution; the Northeast. The Northeast is home to a handful of eltist-financed groups such as the Catskill Mountainkeeper and NRDC (one and the same), the Delaware Riverkeeper, the Sierra Club and the Clean Air Council. They routinely spend their trust-funder bucks attacking pipelines helping to improve Northeast air quality. Here’s one tiny example of the inflammatory rhetoric (from the Clean Air Council) coming from these shills for snobs (emphasis added):

PennEast Pipeline Company has proposed the 114 mile-long PennEast Pipeline, in an attempt to build a part of a potential pipeline buildout for moving fracked gas from Pennsylvania. Part of that pipeline project includes the Kidder Township Compressor Station, a piece of infrastructure to pressurize and transport the gas. The station is proposed to be sited near Hickory Run State Park. Estimates from PennEast Pipeline show that this station will emit hundreds of tons of various pollutants each year and hundreds of thousands of tons of greenhouse gases each year. The compressor station will emit carcinogens, toxins that can damage the lungs, heart, and central nervous system, and smog-forming pollutants.

How far removed this is from the truth may be found by examining the backup data to the EPA report. I decided to focus on three states; New Jersey (where the PennEast Pipeline will deliver much natural gas), New York (which will also get some of that gas) and Pennsylvania (one of the birthplaces of the shale revolution).

I looked at Northeast air quality and natural gas consumption in 2008 at the beginning of the shale revolution compared to last year. EPA uses an Air Quality Index to assess how many “good air” days there are per year. I tabulated the percentages of “good air” days for both years, measuring the change from the beginning of the shale revolution until now. Here are the results, graphically displayed: 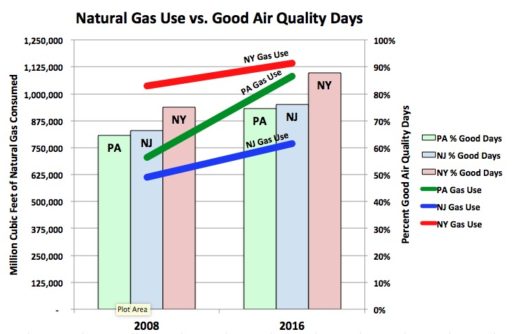 How could this be, given the fire-alarm-clanging claims of the Clear Air Council and all their Heinz and Haas family funded sister groups? Well, we know the answer to that, don’t we? As I explained two years ago, using charts to compare the emissions from the year 2000 when UGI’s Hunlock Creek Energy Center in Luzerne County was a 44-megawatt coal fired plant to 2013 after upgrade to a combined cycle natural gas powered plant with more than twice the capacity. I found Carbon Monoxide had gone down 66%, VOCs had dropped 72%, PM<10 had shrunk 93%, Nitrogen Oxides had been slashed by 96% and Sulphur Oxides had been virtually eliminated. Yet, Jeff Tittel of the Sierra Club of New Jersey was, at that time, opposing a coal to gas conversion in New Jersey.

Tittel and his allies couldn’t care less about clean air. They’re enviro-religionists hired by special interests to do the dirty work of killing or slowing the oil and gas industry so as to advance their own pet projects, assuage their guilt and build their legacies. That’s why they oppose the PennEast Pipeline and other crucial infrastructure projects. It’s all about killing oil and gas, nothing else. The hard data confounds every claim they make in that regard. 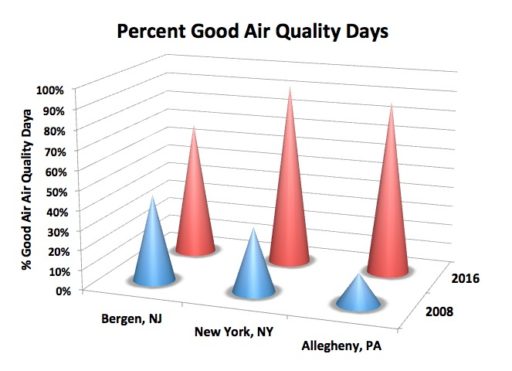 Recall that Pittsburgh, the heart of Allegheny County, infamously banned fracking but, of course, it takes place all around it and the City uses huge amounts of natural gas. Look what’s happened; good air days grew from 16% in 2008 to 88% in 2016. This astounding improvement happened as counties such as Butler to the north and Washington to the south boomed with natural gas development.

Look, too, at New York County (otherwise known as Manhattan). Their commie Mayor is as anti-fracking as it gets, of course, but his predecessor had already done the heavy lifting of converting New York from coal and heavy oil heat and power generation to natural gas with simply stunning improvements in air quality. The percentage of good air days there rose, during the shale revolution that made all that possible, rose from 33% to 93%.

Bergen County good air days grew from 44% to 69%. This stat looks pale by comparison to Allegheny and New York Counties but is, nonetheless, simply amazing. The PennEast Pipeline would help deliver more gas to Bergen County and other parts of New Jersey, of course, and make further improvements possible but standing there in the way of the light, like men and women of witchcraft are the Mountainkeeper, the Riverkeeper and sundry other malcontents for hire. Call them the “DirtyAirKeepers.” That’s what they are; the data proves it.