Local towns cannot legally pass their own ordinances banning fracking. Still, several are trying to pass illegal bans on fracking and the PIOGA is considering prosecution.

As a general rule and principle, local control over decisions that affect an entire community is a good thing. Our great country as founded gives precedence to individual freedom. However, what do you do when two neighbors disagree on an important, community-changing issue?

Our founding fathers wrestled with this concept and crafted an ingenious solution. If everyone in a community voted on every issue, the founding fathers recognized such a system descends into mob rule. However, to preserve democracy and cherished individual freedom, people should have the right to vote. Instead of voting on every issue, the founders created a system where citizens vote for small groups of representatives who act as a buffer between the “mob” and common sense/fairness for everyone, people who dedicate their time to understanding issues, how their constituents feel about those issues, and then voting in accordance with their own conscience and findings. Such a representative democracy is called a republic, which is the political system we have in the United States (NOT a straight up democracy). 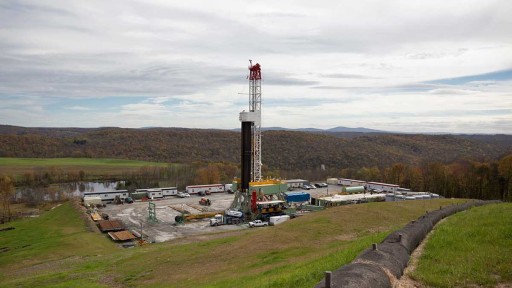 Even among the layers of elected representatives (local, state, federal) there is a pecking order. The founders recognized there are certain rights and issues best decided and enforced on either the federal or state level, rather than the local level. Each local community (let’s call it a township) does NOT have the right to craft its own constitution and confer rights on individuals, corporations, eco-systems or any other entity. Conferring of such rights is the purview of either the federal or state government, NOT a local government.

Since Pittsburgh banned fracking in 2010, more than 100 municipalities have introduced their own ordinances to limit or completely prohibit oil and gas extraction, pipelines, or waste injection wells.

And while those that have been challenged in court have generally failed, Kevin Moody, general counsel for the Pennsylvania Independent Oil & Gas Association in Wexford, says the fight is draining and doesn’t seem to be deterring municipal officials from attempting to block oil and gas development.

Maybe criminal prosecution will do the trick, he has wondered.

It’s a concept he’s been exploring, albeit on the back burner, for several years and Mr. Moody thinks he’s found a fitting criminal statute to try it out. It’s called official oppression and makes it a second degree misdemeanor for a public official to deny or impede someone’s rights or privileges with the knowledge such actions are illegal. The penalty is up to two years in prison and a fine of up to $5,000.

“We think that fits to a tee,” Mr. Moody said, “because these officials are voting for ordinances that are based on a right to self-government that simply does not exist.

“Local governments aren’t sovereigns. They can’t have local constitutions,” he said. “They know this.”

He considers the most egregious example of this to be Grant Township, Indiana County, which in 2014 passed an ordinance prohibiting oil and gas waste injection wells after Pennsylvania General Energy LLC applied to drill there.

PGE and PIOGA sued the township and a judge sided with them, saying that a second-class township such as Grant couldn’t regulate things that were already regulated by state law.

In response, Grant Township decided to stop being a second-class township and instead adopted a Home Rule Charter which specifically outlawed oil and gas development and injection wells, gave explicit rights to ecosystems and explicitly stated that corporations have none. It also legalized civil disobedience for people acting to stop anyone from going against the charter.

The township’s charter was drafted by the Franklin County-based nonprofit Community Environmental Legal Defense Fund, which has helped to enact about 100 such ordinances in Pennsylvania. Many have been intended to protect citizens against what the organization considers the invasive influence of agribusiness. About 10 or 15 deal with oil and gas activity, estimated Chad Nicholson, Pennsylvania organizer for the group.

The laws and agencies that exist to govern corporations, he said, privilege those corporations over the rights of people and ecosystems. When local governments run up against that — when they see the state Department of Environmental Protection won’t deny drilling permits, for example — they start to think about how they can protect themselves by passing ordinances and charters that assert what their rights are, he said.

Mr. Moody says the Community Environmental Legal Defense Fund has never won a case and uses its losses as evidence that the system is stacked against the little guy.

Mr. Nicholson says its legal pursuits are a mixed bag and that some issues are still unsettled. A major one, in the case of Grant Township, is whether a Home Rule Charter that purports to regulate some of the same activities as state law is legitimate.

He’s not surprised that Mr. Moody would consider criminal prosecution. He’s heard the trade group’s attorney mention it before and believes it illustrates “the sense of privilege and entitlement” that companies have for the communities they try to “bully into submission.”

“They want to deny corporation rights but they want to give rights to ecosystems,” Mr. Moody told a group of conference attendees at Marcellus Shale Coalition’s annual event last month. “The only way to deter CELDF is to hit them with the pocket book or criminal liability.”

In the audience was Craig Mayer, former general counsel at Pennsylvania General Energy Co. who has worked on the Grant Township issue.

“You might talk to the local district attorney or the attorney general,” he suggested, someone with the “intestinal fortitude” to go after municipal officials under the official oppression statute.

Click here to finish reading this extensive article (much more to read, worth your time). 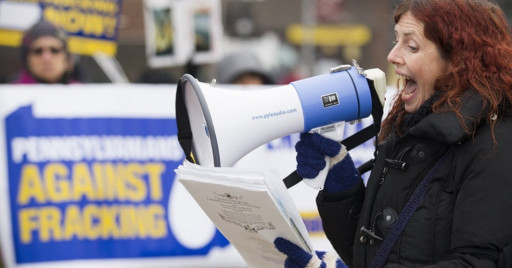 The article above mentions Grant Township. One of the supervisors of that town who may be acting illegally (according to the official oppression statute) is Stacy Wanchisn Long, vice chair of the board of supervisors. Last week she spoke to a small workshop on shale waste at Westminster College in New Wilmington. The workshop was sponsored by a radical anti-drilling group called ALLARM and the League of [Liberal Democrat] Women Voters:

The leaders of Grant Township continue to fight a proposed injection well, despite setbacks including lawsuits.

If the town of 700 people can stand up to the gas and oil industry, so can everyone else, said Stacy Wanchisn Long, vice chair of the board of supervisors; she was one of six panelists who spoke Thursday at Westminster College, New Wilmington, to a crowd of about 40 on “Shale Waste Disposal Workshop: Community Concerns on Injection Wells.”

“I know what we’re doing is right,” Long said.

The workshop focused on safety, health, environmental and other issues surrounding liquid waste created by the extraction of gas and oil through hydraulic fracturing, or “fracking.” The event was presented by the Lawrence and Mercer Alliance for Aquatic Resource Monitoring (ALLARM) program, which is based at Westminster; and and the League of Women Voters of Pennsylvania’s “Straight Scoop on Shale” initiative, supported by a Colcom Foundation grant…

Long said the township has been fighting off an injection well proposal from Pennsylvania General Energy since August 2013. They did their research and have concerns about drinking water, earthquakes and property values, and believed the EPA would consider their objections, especially since PGE has violations on record. The permit was approved.

Everyone in Grant Township has a private well or spring; they do not have access to a public water source. The injection well would produce 30,000 barrels of wastewater a month for 10 years.

Township supervisors adopted an ordinance to ban injection wells, and PGE sued them in federal court, citing a violation of their constitutional rights. The lawsuit could bankrupt the town, and litigation is ongoing, Long said.

The township also adopted a home rule charter and reinstated the injection well ban, and the “shenanigans” they’ve dealt with have made them realize that the law is not on their side – a practice that needs to change, she said.

Click here to read the full article, consisting of flummery spewed by anti-drilling zealots about how oil and gas development kills everyone, including Mom Earth.