The Clean Air Council, like its sister group, is focused around the work of one individual: Joseph Otis Minot, Esq. a gentry class member and tool.

The Philadelphia-based Clean Air Council, together with the Delaware Riverkeeper (Povertykeeper), seems to have a found new home these days in Southwestern Pennsylvania, attacking gas drilling in everyday it possibly can by launching frivolous lawsuits and the like in places such as Mars, which most Pennsylvanians probably thought was another planet. The Council, as we explained here last week, is, together with the Delaware Riverkeeper, PennFuture and State Impact one of the weapons in the arsenal of the William Penn Foundation to fight shale gas. The latter is hardly the only funder of the Council, though. Like its sister entities, it, too, has been generously funded by the Heinz Endowments, which has been pursuing 57 varieties of fractivism for several years now.

When we looked at the Council’s latest 990 return on file we noticed it’s income tends to go up and down sharply and this table from the Heinz Endowments grant recipients page tells why: 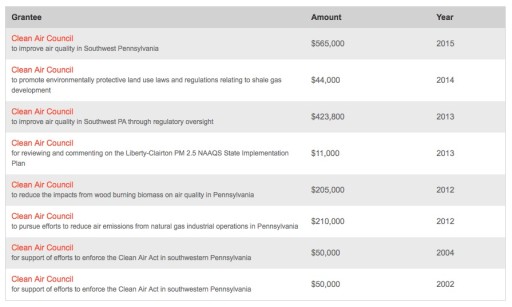 As the table demonstrates, the Heinz Endowments, controlled by the haughty leftist widow of John Heinz, Teresa Heinz Kerry, has given the Clean Air Council $1.56 million since 2002, more than one-third of it just year to expand its operation in Southwestern Pennsylvania. That’s what financing the sort of things going in Mars, which is no more grass roots than your average Wal-Mart parking lot.

Teresa Heinz Kerry was born Maria Teresa Thierstein Simões-Ferreira in Mozambique, educated in South Africa and achieved wealth by marrying John Heinz, which gave her the opportunity to become a “philanthropist.” Now she funds one radical cause after another using her first husband’s wealth to do so. She’s worth a billion or so.

Clean Air Council Executive Director Joseph Otis Minott, apparently named after a famous artist in his family, also received part of his education in South Africa. He was the son of a diplomat and one of the heirs of the Disston family (industrialist know for manufacturing saw blades). This puff piece from 1990 tells the story. Like all trust-funder types he needed to be relevant as a member of the gentry class and so, following law school, he took up with the Council in 1982 (at age 24) and has stayed there ever since living off his fellow elitists at the William Penn Foundation, the Civil Society Institute and the Heinz Endowments.

Minott told the reporter 25 years ago that he was no fanatic:

“I am not a fanatic at all,” Minott said. “I’m as mainstream as you can get.”

A fanatic, he said, would have converted the house to solar heat.

Things have changed, I guess, especially the definition of “fanatic” as this is what the Clean Air Council is saying today (emphasis added):

Our first initiative was a local campaign called Solarize Northwest Philly. In early 2015, homeowners attended workshops at libraries and local businesses to learn how to use their collective buying power to get solar systems for their properties at greatly reduced costs. Through the program, we educated over 125 people through 8 workshops, and got commitments from 15 people to go solar! Our total impact was about 75 kilowatts, which is the equivalent to planting over 25,000 trees or taking over 200 cars off the road.

It’s all part of a campaign on behalf of solar energy, based a set of false premises. Suggesting it is fossil fuels that are the problem completely ignores the fact, proven by New York City’s experience (see video below – click to play), that natural gas will deliver much cleaner air and better health and do it in much, much bigger fashion than solar energy. It also ignores the tremendous cost in ratepayer and taxpayer subsidies that solar energy involves and the costs to human health involved from having to mine the rare earth minerals required to manufacture the components.

The Clean Air Council’s drive for solar, of course, isn’t driven by logic or it would be a fan of natural gas as the quickest and easiest way to clean the air at the least cost with the most effectiveness. Rather, it is propelled by ideology – a religious like belief in an impractical energy utopia. The materials assembled by the Council to promote Solarize Northeast Philly and get those 200 cars off the road by solarizing 15 homes (an infinitesimally small fraction of the homes and traffic there) reveal it, along with an upside down view of how to achieve results.

They talk about particle matter pollution, for example, which is most easily and most quickly solved by a coal to gas conversion. They also talk about CO2 levels, which have already been lowered by coal to gas conversions. They talk about the dangers of everything but renewables, which are put forth as a great bargain because someone else will pay for it, of course, in the form of 30% tax credits and, they hope, net metering which would force other ratepayers to buy excess solar energy when it isn’t needed and can’t be used – another subsidy.

But, one suspects there’s more to it than that; solar energy may, in fact, be more rational than it might first appear. This is because the first objective of any organization is to ensure its own perpetuity. The Clean Air Council was worried about that when, using a grant from the William Penn Foundation, it developed a strategic plan five years ago – a plan to diversify both geographically and organizationally. Here are some excerpts (emphasis added):

The Council has been active in working within a broad coalition to promote the emerging green economy, but the national commitment is weak and the outcome of Congressional elections in 2010 could slow down the momentum. The Council has been fortunate to be able to partner with national organizations such as the Natural Resources Defense Council to move the agenda forward. Indeed, doing consulting work for better-funded national groups may provide continuing opportunities for the Council…

Goal 3: Ensure that the Council has adequate, stable, and diverse funding.

Objective 1: Achieve an adequate revenue stream, with no more than 50% coming from any one source.

Objective 2: Secure funding from every geographical area that the Council serves.

We see the results of this plan in the Council’s latest posted financial statement (for the year ending June 30, 2013), which shows this: 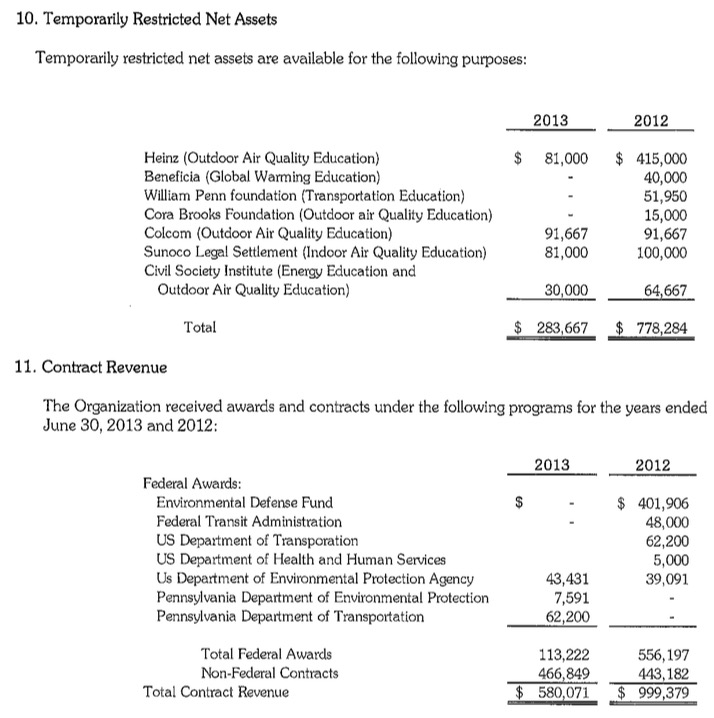 Notice the sources of funding revealed by the list of temporary assets (grant funds not yet expended), which include monies from Teresa Heinz Kerry, the Haas family (the William Penn Foundation), the Colcom Foundation, the phony Pam Solo (the Civil Society Institute) and a lawsuit. Then, look at the list of Federal and Non-Federal contracts (which inexplicably label EDF money as Federal money). The Council took in over $1.5 million in contracting revenue in two years, at least $900,000 of that from “Non-Federal” contracts.

Could any of those contracts have been with solar energy companies who have been feeding at the Federal and state troughs and developing derivatives-like financing schemes based on Solar Renewable Energy Certificates? We know the Clean Air Council spent a lot of energy on getting those 15 solar systems installed in Northeast Philly and, based on its Strategic Plan, that type of contracting (along with suing) was recommended as a way to get to a stable funding base. Were they paid by the solar companies to line up customers?

Well, we know Joseph Otis Minott, Esq., the personality who defines the Council, is the attorney of record for a group called The Alliance for Solar Choice, which is interjecting itself into a PECO Energy rate matter before the Pennsylvania Public Utility Commission in an attempt to secure additional special favors for solar energy energy providers at other ratepayers’ expense. The Alliance is a trade group composed of “the vast majority of the rooftop solar market,” and is co-chaired by John Stanton, one of the Executive Vice-Presidents at Solar City – the Elon Musk organization sucking off all 12 teats of the New York State taxpayer sow right now. Is the Clean Air Council being paid by the Alliance? Or, is Joseph Otis Minot, Esq.? Or, is one or the other doing it for free to further the agenda? 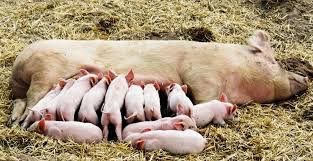 We can’t know the precise answer to that just yet, but it’s not hard to see what’s happening. The Clean Air Council isn’t about cleaning the air at all, or it wouldn’t be so adamantly opposed to natural gas, fighting it at every opportunity. No, what the Clean Air Council is about is getting contracts and grants; doing the bidding of its special interest funders, while pretending to be just another “mainstream” charitable group. There are still plenty of naive emphatic reporters who will be taken in, of course, but Joseph Otis Minott, Esq. is a fanatic (see this University of Pennsylvania description of a course he taught there if you still labor under any other thought) and so is his Clean Air Council. It’s also mercenary.

3 thoughts on “Who Is the Clean Air Council?”