The Mariner East 2 Pipeline is the target of an harassing lawsuit intended to simply delay completion. It is being financed by the Haas and Heinz families.

Back in May, six anti-pipeline residents living near where the Mariner East 2 pipeline will pass asked the Middletown (Delaware County, Pennsylvania) town council to reject the path of the pipeline near their property because it would, supposedly, pass closer than town code allows. The town council told the residents they’re out of luck—the town will not pursue any action to block Mariner East 2. Period. But, that wasn’t the end of it, as Mariner East 2 is being harassed with an irrational lawsuit paid for by the Clean Air Council and the elite foundations who fund it. 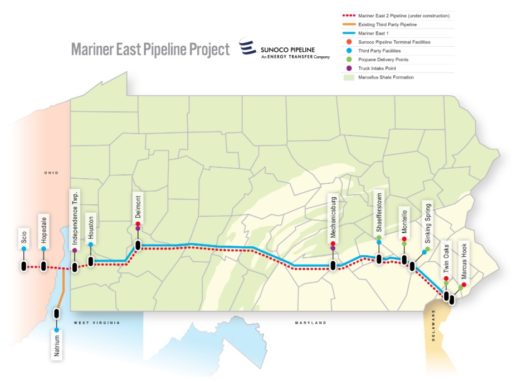 The residents, amped-up, agitated and funded by Big Green groups filed a lawsuit against the pipeline, to force it to conform with Middletown’s ordinance. The lawsuit was filed in the the Delaware County Court of Common Pleas. The judge dismissed the case in June, so the antis, again funded by Big Green groups, appealed the case to the next higher court, Commonwealth Court.

On Wednesday, an “en banc” panel of Commonwealth Court heard arguments in the case (“en banc” meaning all of the judges heard the case, indicating its high importance). One report of the session indicates the judges expressed skepticism that Sunoco Logstics Partners, the builder, does not have to follow local town ordinances because the pipeline is overseen by the the state and state regulations preempt local ordinances.

Needless to say if the case goes against ME2/Sunoco, it will make it harder (but not impossible) to finish work on time. Here’s the news as reported by the Daily Local:

The Commonwealth Court of Pennsylvania heard arguments Wednesday in the appeal of six local residents seeking an order to enforce a Middletown setback ordinance in the construction of the Mariner East 2 pipeline, currently being installed in municipalities across the state by Sunoco Pipeline LP.

The “Middletown Six,” represented by attorney Michael Bomstein, claim an ordinance requiring the liquefied fuel line to be placed at least 75 feet back from homes does not interfere with – and is therefore not pre-empted by – the state’s Public Utility Code.

The plaintiffs previously made their case before Delaware County Common Pleas Court Judge Charles Burr, who sustained Sunoco’s preliminary objections to the lawsuit and dismissed the complaint in June.

In hearing the appeal Wednesday, the Commonwealth Court mainly focused mainly on the issue of whether the Public Utility Code specifically pre-empts local ordinances with regards to pipeline siting in the same way that it does power lines.

“Sunoco is contending that the state has staked out a position and the position is that it will make the decision and the localities may not do that,” said Bomstein. “More specifically … if Section 501 of the PUC code does not specifically talk about siting, does that mean that localities have the right to do it, or does it mean that the state always has the right and only the PUC can decide?”

Attorney Mark. L. Freed, representing similarly situated West Goshen residents, argued Wednesday that any pre-emption specifically granted to the Public Utilities Commission under Section 619 of the Pennsylvania Municipalities Planning Code applies only to “any existing or proposed building . . . used or to be used by a public utility corporation,” granted that the building is “necessary for the convenience or welfare of the public.”

“Words matter, 619 has to be read for what it says,” said Freed. “It deals with buildings. This is not a building. …There is nothing in either the MPC or the PUC code that says the MPC code is pre-empted by the PUC. The general assembly could have very easily done that, they did not.”

Attorney Robert Byer, representing Sunoco, said the Pennsylvania Supreme Court has already decided the issue in a 1954 case that has carried over into subsequent Commonwealth Court cases dealing with pre-emption.

“The PUC has the authority to regulate siting if it chooses to do so,” argued Byer. “Section 501 and 1504 … provide ample authority for the Public Utilities Commission to adopt regulations of that nature.”

Judge P. Kevin Brobson asked Byer whether the placement of a pipeline within a setback determined by a municipality constitutes a de facto taking of that property for which the resident might be entitled to some compensation, eliciting applause from one member of the audience.

Byer replied that that might require a factual inquiry, but has nothing to do with pre-emption. Brobson and Judge Anne Covey then asked what would prevent a company from simply putting a pipeline in anywhere it chose and how someone could go about challenging that.

“They would have to show that by putting the pipeline in the area that it is being placed would violate the rights of the public to be accommodated to convenience and to safety on the part of the public utilities,” answered Byer. “And if somebody can go in and make that case, then the Public Utilities Commission would have the authority to hear it, the (PUC) would also have the authority to impose regulations if it chose to do so.”

Brobson posited that such a proposition could lead to a line of lawyers looking to challenge pipelines on an ad hoc system, but Byer argued there is a long standing principle under Pennsylvania law that zoning regulations, with the exception of buildings, are pre-empted with respect to public utilities.

He pointed to a 1966 Pennsylvania Supreme Court case that found individual counties pronouncing their own regulations over electric wires and oil lines would lead to utilities becoming so twisted and knotted as to adversely impact the entire state.

Brobson noted the issue is not whether municipalities have the power to do so, but whether the PUC does. Freed argued there is an “absolute vacuum” in regulations on that point.

Bomstein said that Sunoco’s argument that adhering to local ordinances would make pipeline construction impossible is speculative and there needs to be a fact-finding hearing before Burr.

“Sunoco is free to argue that if they have to move their pipeline a few feet over somewhere else, it would make it impossible for them to achieve their legitimate end,” he said. “I think it would be reasonable for Judge Burr to allow a factual record to be made, and if Sunoco concludes that it’s not able to comply with the local ordinance and achieve its legitimate objective, then Sunoco can claim that. But I don’t think Sunoco can do that.”

Although the article above points out that the attorney for the so-called “Middletown Six” is Michael Bomstein, it does not tell you that Bomstein’s son Alex is senior litigation attorney for the radical Big Green, Philly-based Clean Air Council (CAC), which is also involved. The Clean Air Council’s money comes from millionaire contributors who fund radical environmental organizations such as CAC. Like we said, these people are amped-up (puppets) being manipulated by outside forces.

Editor’s Note: The Bomstein family has a nice gig going with the Clean Air Council. The latter has an even better gig going with the Haas family (the William Penn Foundation) and the Heinz family (the Heinz Endowments), two of the principal funders behind gentry class Joe Minott’s very political organization. Both families are integrally involved in funding fractivism and pipeline opposition in Pennsylvania. The Clean Air Council is one of their tools for fighting anything to do with oil and gas, regardless of air quality issues, which is ironic given the fact natural gas has done more to lower air emissions than anything. If the Clean Air Council did care about clean air it would favor natural gas development, but that’s not what it’s sugar-daddy funders desire. It’s the Haas and Heinz families who are pursuing this harassment case against Mariner East 2; make no mistake about it. 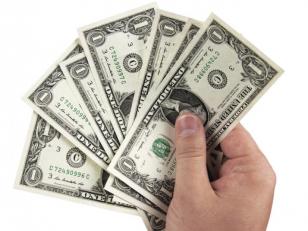 Money and more money for lawsuits and ginning up pipeline opposition from the William Penn Foundation, the Heinz Endowments and even the EPA

Interesting, too, is the fact the Clean Air Council has been off ripping taxpayers to do its advocacy. It has received over $1.4 million from the EPA. Much of that money has gone to replace diesel equipment at Philadelphia and Wilmington ports, which has at least a tangible public benefit, but two of the grants are purely in the advocacy realm. One is this $25,000 “environmental justice” grant given in 2012 (emphasis added):

Clean Air Counci will identify environmental hazards in the low-income neighborhood of Port Richmond in Philadelphia, Pennsylvania. The recipient will work with the residents through workshops and coalition building in order to help residents develop and advocate for policy solutions that will reduce harmful exposure to pollution.

No one can read these descriptions and not understand what’s been going on here. The Clean Air Council has been taking money from EPA to organize opposition to projects such as the Mariner East 2. As the Council says, “Organizing local campaigns are one of the most effective ways to create meaningful change on the issue of shale gas development.” That’s what it’s all about for them. They are one of several tools employed by the Haas and Heinz families, using taxpayer money to boot, for the purpose of frustrating the shale revolution any way they can.