American Rivers is another one of those elitist groups more interested in stopping development of any kind and self-perpetuating their organization than protecting rivers.  Their “most endangered river” program is pure demagoguery.

There was much ado back in 2010 about American Rivers designating the Delaware River as “America’s Most Endangered River,” based on the mere prospect of natural gas drilling in that river basin.  Rebecca Wodder, its then Executive Director, came to Narrowsburg to proclaim the Delaware is “threatened by natural gas extraction activities in the Marcellus Shale, where chemicals injected into the ground create untreatable toxic wastewater.”

One would think a professional fear-monger might have come up with something more original.  She’s a true believer type, of course, and, thankfully, subsequently lost out on an Department of Interior appointment as Assistant Secretary due to her radical views on hydraulic fracturing.  Don’t weep for her, though, as she got a consolation prize as “Senior Advisor” to the Department, where she remains.

Interestingly, the Delaware River Basin Commission (DRBC), in this statement theoretically countering the Delaware designation, seemed to endorse it by adding some hyperbole of its own, but that reflects the management of that agency by a fellow traveler, Carol Collier, and is a story for another day.

Hyperbole is the stock-in-trade of all true believers and, especially, American Rivers.  One day it offers the Delaware River version and the next day it’s the Susquehanna version, then it’s rinse and repeat.  It marches into one region after another offering its conscience in place of locals, intent upon creating a climate of hysteria contrary to all facts.  Nevertheless, facts cannot be wished away and they are not on American Rivers’ side.   The Susquehanna River basin has, subsequent to its designation as “Most Endangered” in 2005 and through its repeat designation in 2011, been the site of extensive Marcellus Shale gas drilling.

Most revealing, the following year (2012) and today in 2013, neither the Delaware or the Susquehanna even appear in the top ten list of endangered rivers that American Rivers has put out. This  raises an obvious question – if natural gas extraction was such a threat to the Delaware and Susquehanna, in 2010 and 2011, respectively, why is it no longer a threat, given that drilling is both on-going and widespread in the Susquehanna and likely to happen soon or later in the Delaware basin?  What gives?  How do these two “most endangered” rivers just drop off the map from one year to the next (2013 map depicted below and nothing in the Northeast)? 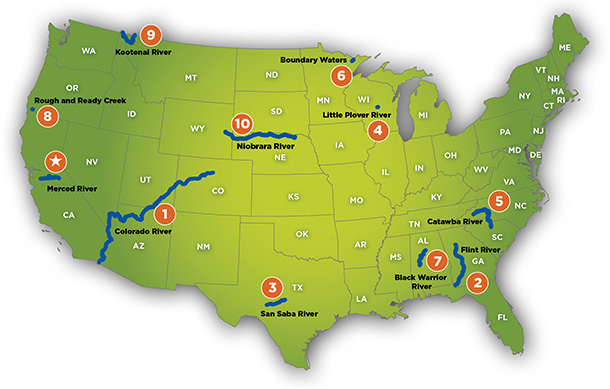 Could it be that American Rivers exaggerates its claims to garner publicity and raise money and then moves onto new territories and fresh demagoguery the next year?  Or, in the case of the Susquehanna River, has quality improved despite gas drilling?  Well, we know the answer to that one.  The Pennsylvania Department of Environmental Protection reports a study of the West Branch of the Susquehanna River from the mid-1980s to 2009, “found dramatic improvements in water quality,”  attributing this to cooperative efforts that included the mining industry.

Moreover, the most recent SRBC State of the Susquehanna report indicates the biggest threats to the river things such as invasive species, stormwater runoff, mine, drainage discharges, habitat encroachment and changes to land use.  Gas drilling and hydraulic fracturing are noticeably absent from the list.  The following chart illustrates the sub-watersheds with the least impairment are, in fact, in areas that include Bradford and Susquehanna Counties, where the bulk of drilling takes place. 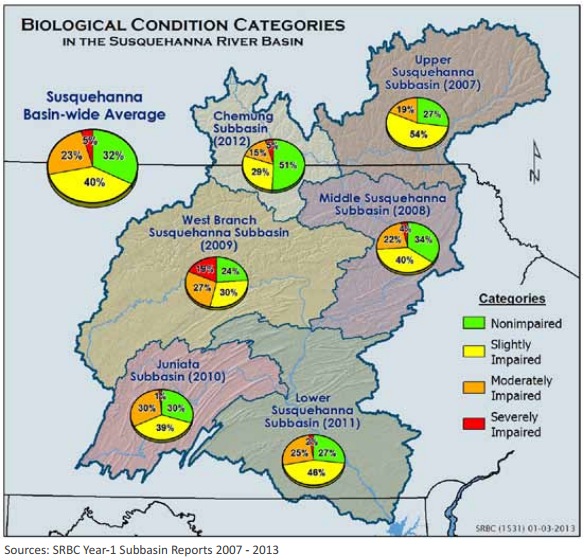 Cooperation between industry and regulators will also be the key to ensuring gas drilling in the Delaware basin also protects water quality.  Drilling must be responsible and subject to proper regulation that evolves with experience.  Working together much can be accomplished but, with groups such as American Rivers distorting the process, nothing is accomplished; neither economic development nor environmental protection.

American Rivers’ actions are intentionally divisive, intended to tear communities asunder and plunge the debate into a morass from which nothing evolves except the delay that kills.  Their strategy is cynical, selfish and elitist.  It’s been funded by the Park Foundation (among several other like-minded groups) since 2002 and got $100,000 in 2012 and $80,000 in 2013 from this funder of everything anti-gas, so it’s hardly surprising.

Still, it’s infuriating the way these representatives of old money, trust-funders and true believers manipulate the press and policy makers.  American Rivers gives me the shivers and it should give you them as well.

3 thoughts on “American Rivers Gives Me the Shivers”