The Upper Delaware region is the focus of some very wealthy special interests determined to keep it in perpetual pastoral poverty – the PovertyKeepers.

There may be no organization doing more economic damage to the interests of the Upper Delaware region of New York and Pennsylvania than the Delaware Riverkeeper Network. It is committed to keeping the region in a state of perpetual pastoral poverty for the sake of the big money funders who pay its bills, especially the William Penn Foundation. Together with the Open Space Institute and its progeny, the Catskill Mountainkeeper, they are now engaged in a two-faced campaign to depress property values by preventing gas drilling and then acquire the land on the cheap to create a playground for the wealthy.

Unfortunately, they are doing so with the support of two local conservation groups acting as its predator drones – the Pinchot Institute and the Delaware Highlands Conservancy. Call them the Upper Delaware PovertyKeepers.

Designs on the Upper Delaware

We’ve talked a lot about the Open Space Institute (OSI) and the William Penn Foundation on these pages. These two entities represent very wealthy special interests (see table below, illustrating the connections of OSI with NRDC and the Rockefeller family) who have as their mission the consignment of the Upper Delaware and Catskill regions to the role of playgrounds for their patrons. 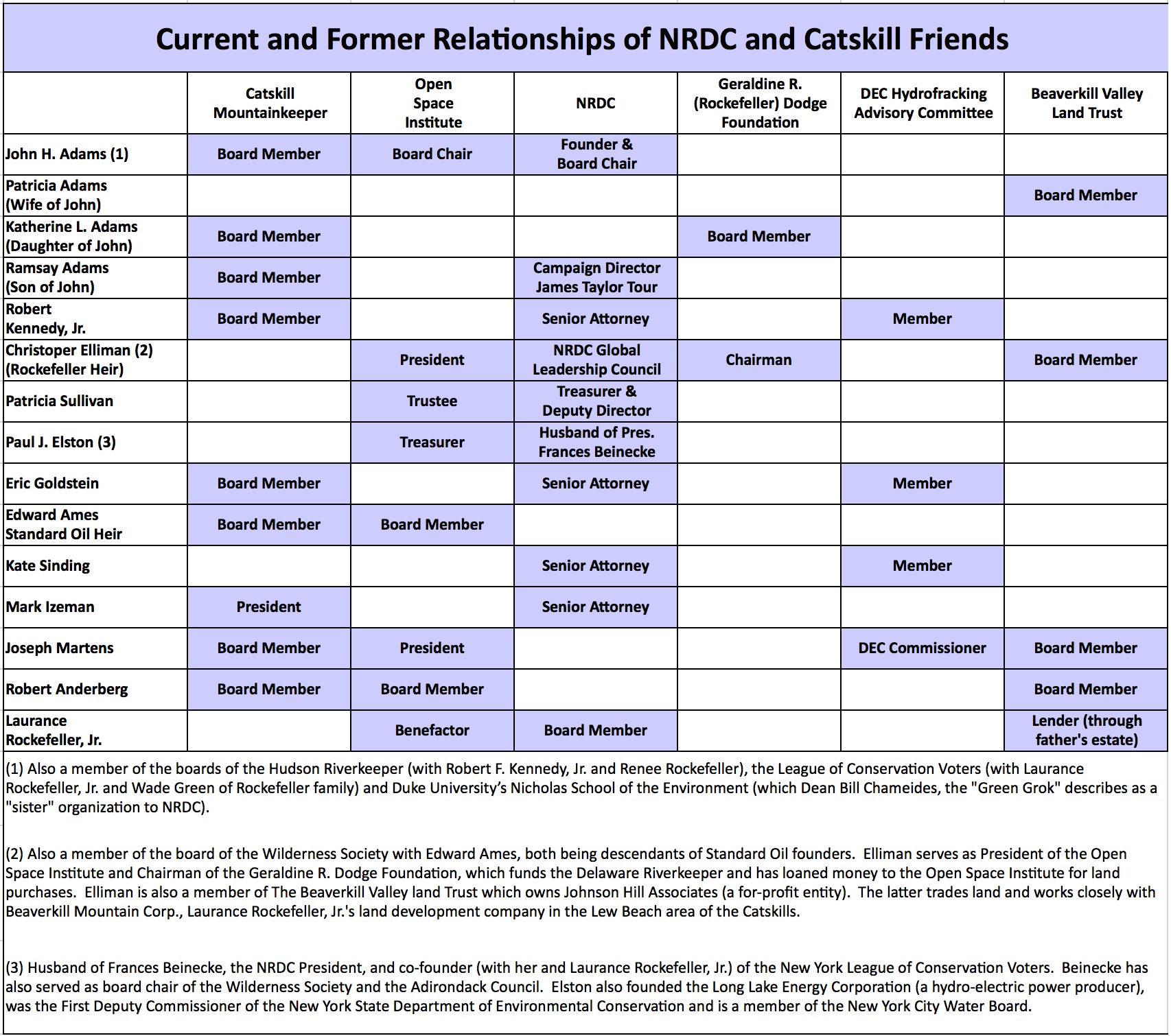 OSI is running a land protection racket in New York that has involved  buying up land with money loaned by the state, selling land to the state for inflated values and using the profits to rinse and repeat, while related organizations trade and subdivide other lands these holdings surround and protect. OSI also spawned the Catskill Mountainkeeper to mount a rear guard action by doing everything it could to stop any economic use of the land OSI might want to buy to keep property values depressed. The Montainkeeper opposes gas drilling, casinos and anything else that might spur economic development inconsistent with its own objectives.

The William Penn Foundation has simultaneously funded the Riverkeeper with huge grants to fight against DRBC drilling regulations, sue the DRBC and very successfully worm its way into the latter’s organizational structure as a “stakeholder” (someone other than a landowner who wants to control land use). It has forged a strategy of delaying gas drilling as long as possible and making it as difficult as possible by funding the DRBC itself to conduct more studies, slapping the agency with lawsuits using the one hand, while giving it money with the other.  The naive Carol Collier, as an ideologue, was an an easy mark for this carrot and stick approach, as were DRBC commissioners anxious to avoid decisions. The Riverkeeper is funded by both the William Penn Foundation and Rockefeller heir Christoper (“KIm”) Elliman, the head of both OSI and the Geraldine R. Dodge Foundation, using the latter as his funding vehicle. OSI and the William Penn Foundation are also now joined at the hip in an effort to offer a different kind of carrot to landowners whose land values and economic opportunities they are squashing through the Riverkeeper (and Mountainkeeper’s) efforts.

The two entities have joined forces to buy off as many landowners as possible and interrupt drilling plans by strategic land acquisitions. They’re using local conservation groups such as the Delaware Highlands Conservancy and the Pinchot Institute (which Carol Collier chaired for a time and receives funding from the William Penn Foundation) as their predator drones to sniff out opportunities and put a kinder and gentler face on their battle to keep the Upper Delaware area in perpetual pastoral poverty for easy pickings later.

The Delaware Highlands Conservancy was formed a few decades ago as a local land trust to preserve outstanding parcels of land by giving landowners an effective economic way to do so through tax-deductible donations. It did many good things along this line and had a good reputation of being relatively non-ideological and focused on its primary objective of conserving land through private landowner initiatives. I know and respect many of the individuals who got it started and moved it forward. Over the years, however, as it’s grown and attracted the interest of some wealthier second-home owners and others who desire to close the door now that they’re here, it has become much more ideological and issue oriented.

Like the Pinchot Institute, it has now allowed itself to be co-opted by OSI and the William Penn Foundation in their war against the Upper Delaware and Catskill regions’ economic interests. It has, in fact, waded into the gas drilling issue with a special page on its website and some guidelines where it says this (emphasis added):

The Conservancy recognizes that fracking for natural gas is not compatible with our conservation mission and goals for healthy lands, clean waters, and locally sustainable economies…

Although the Conservancy is not an advocacy organization, our Board of Directors recognizes that the advent of a pervasive industrial activity, such as drilling for natural gas in the Marcellus Shale formation, is not compatible with our goals. Our mission is land protection, and our work will continue even if gas drilling occurs here.

Gas drilling complicates and compromises the Conservancy’s efforts to protect our region for future generations. For several years we have worked to craft a sensible approach to the threats posed by gas drilling. Other land trusts have issued “policies” on gas drilling that seek to reassure both pro- and anti-drilling factions. We have taken a different approach.

We wish to make clear that we do not favor the introduction of gas drilling into our region. But if it comes, we will continue to carry out our mission to protect the lands in our region that contribute most to its special character. To that end, we have adopted a set of guidelines to inform our land protection efforts.

…The Conservancy protects land that possesses special conservation values; it would be incompatible with our mission to protect land in which those conservation values may be diminished by drilling and its associated activities and infrastructure. Only in cases of exceptionally important lands where there are assurances that drilling will have no impacts will we consider acquiring a conservation easement.

Notwithstanding its protest to the contrary, the Delaware Highlands Conservancy has clearly made the leap from being a tool for landowners to use in preserving their lands to one of advocacy against landowner interests if they involve gas exercising their mineral rights. Its casual and baseless declaration “natural gas is not compatible with… healthy lands, clean waters, and locally sustainable economies” reveals an organization that has now gone ideological, despite the fact they want to protect their 501(c)3 tax-deductible status as a charity. 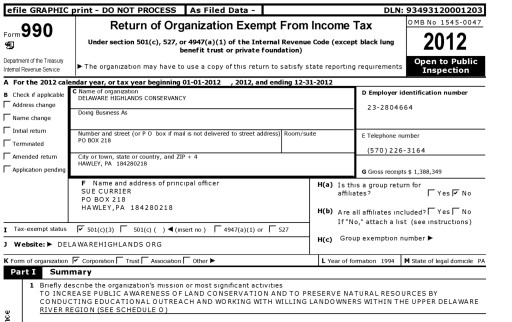 It has now also enrolled itself directly into the OSI/William Penn Foundation war against landowners by sending out a letter dated June 12, 2014 announcing the Foundation’s $35 million “initiative to protect and restore critical sources of drinking water for the 15 million people, in cities including New York, Philadelphia, Camden, and Wilmington.”

The fund-raising letter doesn’t mention gas drilling, of course, but tells the discerning reader this is what it’s really all about by stating (in bold) “The current threats to our water quality are real,” preceded by the ominous warning “the situation has become quite serious.” This is all complemented by an attached River Reporter editorial suggesting these monies would “fuel economic development, job creation” and a bunch of other things.

They will do no such thing, of course. No economic development or job creation will be fueled by acquiring land and putting it under the control of wealthy scions who simply want it as buffers around themselves. Moreover, the entire premise is flawed because it assumes water quality is threatened and needs to be restored to grow the economy. None of that is true. The water is already high-quality and while it helps support a vibrant tourist business that can be grown still further, that won’t begin to touch what gas drilling could do for the area economy (or for open space preservation for that matter).

Additionally, we know from the data on the Susquehanna River basin, where extensive drilling has already taken place, that water quality hasn’t been impacted in any significant way nor has the tourism business been eroded – just the opposite in fact.  The water quality of the West Branch of the Susquehanna and the Tunkhannock Creek, in fact, for the years 2000-2010 which include the initial boom in gas drilling along those streams, was better than the Upper Delaware in many respects (particularly in Total Suspended Solids or TSS), as the following excerpt from a Pennsylvania Department of Environmental Protection (DEP) water quality report indicate:

And, when did the non-threatened interests of the fabled 15 million city residents suddenly  take precedence over the Delaware Highlands Conservancy’s stated tax-exempt goal “to increase public awareness of land conservation and to preserve natural resources by conducting educational outreach and working with willing landowners in the Upper Delaware region“?

Obviously, that objective has now been been submerged beneath the real one which has become to stop gas drilling or any other activity that might interfere with the OSI/William PennFoundation goal of maintaining the area in a state of perpetual pastoral poverty to facilitate land acquisitions for the benefit of the super-wealthy who want this as their playground. Unfortunately, the Delaware Highland Conservancy, together with the Pinchot Institute, has joined the Upper Delaware PovertyKeepers.

14 thoughts on “The Upper Delaware PovertyKeepers”