California has to be America’s most spectacularly beautiful state but it’s politics are as bat crazy as they get and it’s the font of all political correctness. It’s energy policies have always been bizarre, as when it only deregulated one-half of the electricity market so as to make itself more dependent on energy imports. It dreams of being a totally renewable energy state, too, but the reality is quite different, which may be the reason even Governor Jerry Brown, no slouch when it comes to PC stuff, supports fracking. The California energy future may include a lot of renewables but it’ll take more natural gas to get there.

What I’m talking about is a story from Today In Energy. Authored by Owen Comstock, it lays out the hard facts in a non-ideological way. First, there is this interesting chart:

The California Independent System Operator (CAISO), the entity responsible for maintaining the balance between supply and demand for electricity throughout most of the state, operates in a setting where demand peaks in the late afternoon or early evening on summer days. Because of differences in the hourly output of certain electricity generators, some of which are nearly constant (nuclear) and some of which can vary considerably during the day (solar, wind), output from thermal generators (mainly natural gas) and electricity imports from other regions are used to balance overall electricity supply and demand in the region.

Thermal generation in CAISO, almost all of which is natural gas, contributes the largest share of electricity generation in CAISO and has the widest range in hourly generation. Based on hourly data in June, July, and August, on the average summer day in 2016, in-region thermal power output ranged between 7.3 gigawatts and 15.2 gigawatts (GW). Over the entire summer, hourly thermal power output was as high as 25.6 GW at 5:00 p.m. on July 27, when total system demand was high, and was as low as 2.6 GW at 9:00 a.m. on June 12, an hour when demand was relatively low and renewables output was relatively high…

Some renewable fuels have more variable levels of output, particularly wind and solar. Most of CAISO’s utility-scale solar generation comes from solar photovoltaic systems, whose output is dependent on solar insolation (exposure to the sun) during daylight hours. The CAISO area includes a few solar thermal facilities, some of which have energy storage that allows them to produce electricity after the sun has gone down, but these generators make up a relatively small portion of CAISO’s solar output. On an average summer day, utility-scale solar output ranged from 0 GW to 7.6 GW, the largest range among renewable fuels and the only fuel to have many hours without any output. CAISO’s data do not include distributed solar generation sources, which reduce the net electric load that needs to be met by utility-scale generators…

Wind generators provided about 2.2 GW on average, but they ranged from near zero (0.06 GW) to more than 4 GW several times during the summer. Wind output is often at its lowest point during the middle of the day, when solar output is near its highest. Geothermal, biomass, biogas, and small hydroelectric facilities had lower but more consistent output with relatively small differences between their highest and lowest hourly output.

Electricity imports are another option to supplement electricity produced by in-region sources to balance total supply with system load. Data from EIA’s new electric system operating tool show electricity trades among different balancing authorities. CAISO imports electricity from nearby regions such as the Northwest and Southwest. On an average summer day, these imports range between 6.5 GW and 9.4 GW.

So, here are the take-home points:

California can dream all it wants but the California energy future will most definitely include more natural gas use if renewables are to grow and costs are to be kept under control. Only fracking will make that possible. 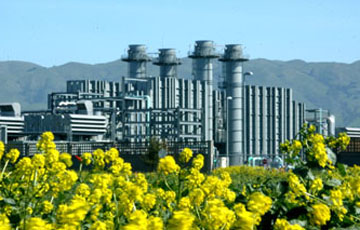 Los Esteros Critical Energy Facility in California, a combined-cycle generation facility capable of generating up to 309 megawatts of electricity.