There seems to be no end to DRBC political corruption, which pervades this public agency. It is treating the residents of the upper basin no better than mayflies.

The Delaware River Basin Commission (DRBC), as we we explained here, here and here, among other places, is a politically corrupt organization.  We have the perfect illustration of this corruption in the release and hyping of a report by the Stroud Water Research Center regarding the supposed danger of produced water (water that comes back up a gas well following fracking) to mayfly populations.

DRBC Corruption: A Mayfly Study That Has No Purpose The study was finished in August of last year, but only recently released. It’s published on the DRBC website as a project intended “to strengthen the protection of basin water quality by evaluating appropriate tests to measure baseline ambient water conditions and their use in assessing any potential impacts from natural gas development through the characterization of toxicity in effluents and surface waters.” This description not only butchers the English language but distorts reality: this study is nothing more than another piece of junk science offered up for political purposes. It’s funded, directly or indirectly, by the same special interests who are funding other anti-drilling campaigns. It is an outrage at which every citizen should take umbrage.

Before addressing the DRBC corruption aspect of this story, let’s look at the “science” itself. What is the basis of the study? What is its premise? A casual reader might conclude the premise is that natural gas development generates produced water, produced water hurts mayflies and, therefore, fracking hurts mayflies. That, of course, is exactly what anti-fracking special interests want you to believe. The study proceeds precisely on this basis.  The opening lines say this, in fact:

This was an ecotoxicity study that examined ambient water and water produced from natural gas drilling (i.e., water coming from a natural gas well after the well was hydrofracked, and gas collection has begun). Its purpose was to measure responses, if any, of benthic macroinvertebrates (in our study,mayflies) that are common and important components of stream ecosystems…

There is just one gigantic problem. The DRBC’s proposed gas drilling regulations say this about produced water (which they refer to as wastewater):

Flowback and production water or any other category of water that is not fresh water must be stored in water-tight tanks designed and constructed to safely contain the water and meet applicable host state requirements. Such tanks must be used and maintained according to the manufacturer’s specifications.

It’s right there on page 65. Flowback and produced water must be stored in water-tight tanks as part of a closed loop system where the water doesn’t get exposed to the air. Only those mayflies who somehow reside inside water-tight tanks could possibly be affected. The fundamental premise of the entire study is fatally flawed. It studies something that will not happen. The Stroud Water Research Center might as well have studied how many carrots it takes to make a car tire or the productivity of mango farms in upstate New York. Granted, the convoluted nature of the DRBC regulations theoretically allows exceptions to this and many other proposed rules, but the bottom line is that it isn’t happening. The universal industry practice in Northeastern Pennsylvania is to use closed-loop systems, not open air wastewater pits, and to recycle all wastewater, so the likelihood of any flowback or produced water coming in contact with mayflies is nil. Moreover, the DRBC has complete control. No wastewater can be stored, transported or even reused except by the agency’s permission anyway. So, what is the study about? Why was it ordered? Who really paid for it? Why does it not address the actual risk of what was studied? What’s the point?

Well, that becomes quickly apparent when one reads this summary of the study published on the Stroud Water Research Center’s website. It’s reprinted by permission, from a radical propaganda and anti-fracking site called Truthout, which is regularly funded by the infamous Park Foundation, one of the major fonts of all fracking opposition. The mere fact the Stroud Water Research Center would reprint something from such a looney tunes website tells us it is doing politics, not science. The purpose of the study was to provide headline fodder for anti-fracking special interests.

The Truthout piece is just another hit job on fracking, quoting Sandra Steingraber, for instance, as if she actually knew something about recycling. She even manages to attack that process along with fracking, which is pretty remarkable. She supposes the produced water is simply recycled without treatment and, therefore, gets saltier each time–a “fact” easily disproven by two minutes of research by any unbiased observer. Truthout claims to be unbiased and independent, by the way, which a mere two seconds of research on their site will disprove, not to mention the Park Foundation funding.

Steingraber speculates the contact with mayflies could happen from a spill of produced water, citing fears over what could have happened from a 400-gallon spill that occurred in Washington County, Pennsylvania, if it had reached a stream.  She relies upon the study’s conclusion that “Wastewater diluted down to 2 percent killed half of all three species of mayflies in a 48-hour exposure period.” It also stated “Non-lethal effects were consistently observed even at concentrations near 0.25 percent.”

Well, we can speculate, too. Let’s suppose the entire contents of a 5,000 gallon tanker of produced water (some 12 times the 400 gallons Steingraber thought was more dangerous than a 1,300 gallon diesel spill) was accidentally dumped into the Dyberry Creek, which is a premier fishing stream rated Exceptional Quality by Pennsylvania. It’s mentioned in the study and has an average flow of 105 cubic feet of water per second. No one, least of all me (I have animals who stop to drink the water from the creek on occasion), wants fracking wastewater to find its way to the Dyberry but, suppose it did. That flow would be diluted to a non-lethal 0.25% in just 42 minutes and it would be diluted to 0.004% after 48 hours.

A little math reveals this entire study is much about nothing, yet it’s obviously about something, isn’t it? Why would the DRBC be soliciting it? That answer becomes crystal clear with a visit to this web page on the Stroud Water Research Center site which indicates the following:

The DRBC, of course, took major money from the William Penn Foundation to study gas drilling in a staggering disregard for conflict of interest. This fact should live in infamy, given the Foundation is also the major funder of the Delaware Riverkeeper, which is in the business of suing the DRBC. The Riverkeeper is opposed to any and all natural gas development and has used its William Penn Foundation money to join the New York Attorney General in filing suit against the DRBC on the matter. The DRBC’s response was to prostitute their own agency to the same funder. The following chart explains the incestuous relationship of these entities, all acting in concert to usurp the rights of upper basin landowners and residents. 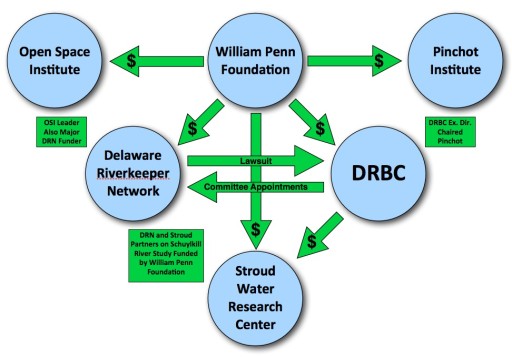 The Stroud Water Research Center is doing the same thing, making it a ménage à quatre. The Center constructed a new building for themselves in 2008 at a cost of $6.5 million using tax-exempt bond financing (see picture below). The annual payments are slightly less than $250,000, so they can always use the money. And, use the money they do. The center spent over $505,000 on facilities in 2012 and their prodigious fund-raising from the likes of the William Penn Foundation that year enabled them to earn a cool $1,538,445 in net income on revenue of $6,309,580. Nice margin for a non-profit. Environmentalism and cozying up to elite special interests with deep pockets and tall agendas can be very rewarding. 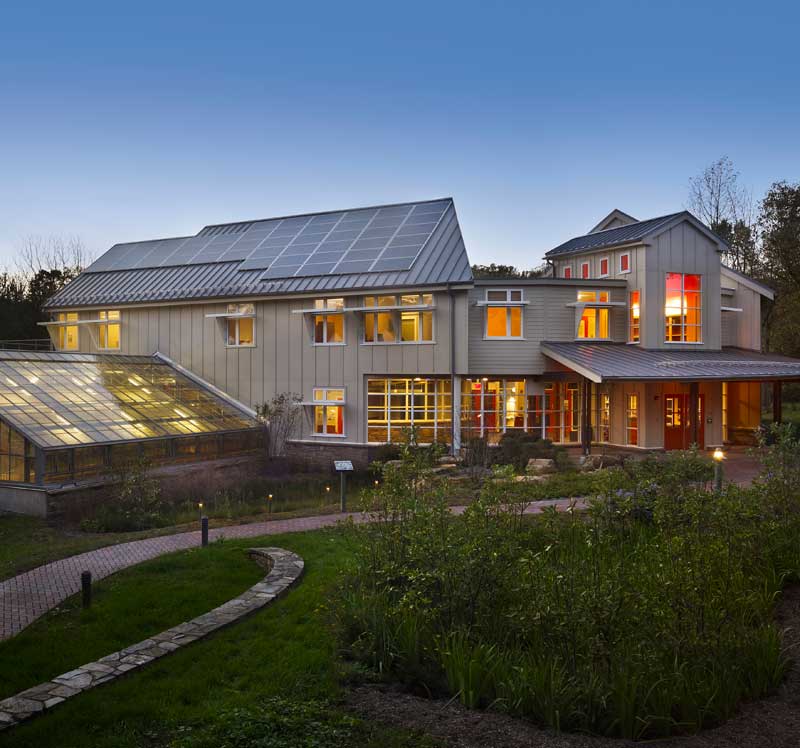 This isn’t to say the Stroud Water Research Center isn’t doing some good work here and there. No doubt, it is. But, it’s also obligated to the William Penn Foundation in a major way. And, the Foundation’s goals are forthrightly anti-fracking. It funds the NRDC and its Open Space Institute and Open Space Conservancy spinoffs, all of which are run by the same group of Rockefeller associates who fund the Riverkeeper.

The William Penn Foundation also funds the Clean Air Council, Earthworks, PennEnvironment and the Sierra Club, as well as others, all having anti-fracking agendas. It is, likewise, engaged with the Rockefeller/NRDC gang and local proxies such as the Pinchot Institute (formerly chaired by then DRBC Executive Director Carol Collier) in a broad based effort to shut down natural gas drilling and acquire land on the cheap in the upper basin.

Add it all up and you have a corrupt den of special interests working together to deny the landowners of the upper basins not only their property rights, but also the simple ability to make a living, pay their taxes and hold onto the land they’ve protected for generations. It’s nothing less than theft and it is being done out in the open with the tacit cooperation, even leadership, of a public agency. If only that agency cared as much about the people of the upper basin as its mayflies.

9 thoughts on “DRBC Corruption – How It Works”