Penn College is a bright gem in the Pennsylvania renaissance brought about the shale gas revolution. It’s both visionary and practical, two things that don’t always go together.

There may be no better place to go regain your optimism about America’s future than Williamsport, Pennsylvania, where an industry and a college have helped to engineer a Pennsylvania renaissance. It is a feel-good success story about how to bootstrap America back to a position of economic leadership on the strength of the shale gas revolution and an educational program that is simultaneously visionary and practical.

Williamsport is a relatively small city surrounded by very rural north central Pennsylvania. The county seat of Lycoming County, Pennsylvania, it is famous for also being the home of Little League baseball, which is headquartered in adjoining South Williamsport. The city and its companion municipalities are large enough to be considered a metropolitan area, one of 381 in the US.

Rather incredibly, because it has developed as a hub of Marcellus Shale activity in the Commowealth, it achieved the rank of having the seventh fastest growing economy among these in 2011. It also has the the sixth highest increase of salaries and, as we noted in an earlier story, Halliburton, starting from nothing, has become the largest for-profit employer in the county in just six years.  The city has new hotels, restaurants and other burgeoning business activity everywhere you look. What some might have described as “rust belt” a decade ago, is now bright and shiny.

A major part of the reason for this Pennsylvania renaissance story is an unusual educational institution called Penn College. Part of the Penn State University system, The Pennsylvania College of Technology, Penn College for short, is one of three mission schools operated by the university. The others are the Penn State Milton S. Hershey School of Medicine and the Penn State Dickinson School of Law. All three operate semi-independently from the university but are networked within its system to the considerable benefit of students and the Commonwealth.

Did that get your attention? Well, it should have because there aren’t too many opportunities out there like that these days, but they exist with the proper training and some good old American entrepreneurialism. It’s the true story of what Penn College made possible for one of the graduates of its welding program. Moreover, the placement rate for students in the program is 100% and, while not all them are going to earn that kind of money, $150,000 per year is not unusual for someone willing to work their butts off to get a good start.

Turning Things Upside Down – In A Good Way

This, of course, gets to the heart of what the renaissance is really about. It’s not the industry per se, but the opportunity for properly trained blue collar workers to do far better than their white collar counterparts. Things have turned upside down in a good way, rewarding true productivity and rural kids with basic skills in short supply in our yuppie world are being given the opportunity to master them and enjoy the rewards.

Did you know, for example, its possible to get a four-year baccalaureate degree in welding? Well, you can at Penn College, one of the few places in the country where it’s possible to do so. That degree also includes lots of traditional academic education but it’s done in a different way at Penn College, where the hands-on training comes first and the general education later in your studies. Why? Because that’s when the student realizes he or she needs it and will benefit by it to take them to a higher level of skill. You might say it’s a case of learning the academics when they’re no longer academic.

This is the visionary part of Penn College; teaching with a purpose that is clear enough to the student to motivate learning for learning’s sake. It’s all part of building a desire in the student to be as good as they can be at whatever they choose to do, but constructing the ladder of achievement in such a way that one always wants to take the next step to get a better view.

It’s reinforced by something else that’s very visionary about the Penn College program; their stackable credential initiative. The college participates, with three other educational institutions from around the country, in something called ShaleNet.  You can read all about here and we’ll be talking more about that in Part II of this series, but if you visit that website you’ll note it talks about everything from three-week certificate programs to four-year degrees.

Penn College’s model is at the heart of that effort. It trains incumbent workers, provides non-credit training to anyone who wants to improve their skills and offers also two and four-year degree programs. Here’s what’s really different, though; you can start a certificate gained from a three-week program and end up with a degree. It’s called “stacking credentials.” 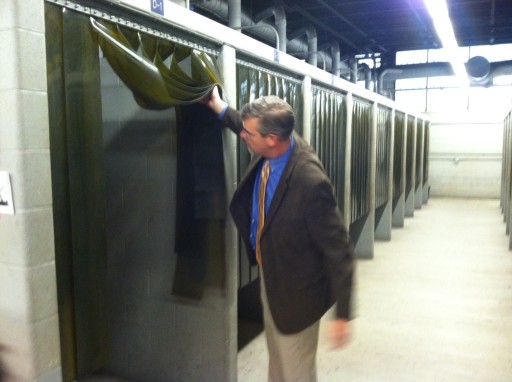 Dr. Paul Starkey showing off one of the many welding booths where students at Penn College can get a 4-year degree in welding

A student who takes a short course for self-improvement can decide to pursue another, or several more, and then start combining this into a managed program that eventually leads to an associates degree or higher. There has been a lot of talk recently about the need to reinvent the college experience and it’s harder to think of a more innovative approach  than the “stacking” of credentials. It’s that vision thing again and Penn College has it galore.

There’s also a practicality to Penn College, however. Every student, academic or otherwise, gets hands-on experience. There is training in everything technological imaginable and we’ll go into that later as well, but everything at Penn College is oriented toward not only understanding something intellectually, but also feeling it and truly understanding it. Their mechatronics lab combines the hands on with the intellectual in fascinating ways as you’ll see in our next post. Never heard of “mechatronics” before? Don’t worry, we’ll explain.

Meanwhile, check out Penn College for yourself. They’re training literally thousands of students every year using a model that works, which, of course, might also be said to be what they do. Indeed, their registered trademark motto is “degrees that work.” They have a gorgeous campus in downtown Williamsport that shines like the gem that it is. I was fortunate enough to get a tour of it and two satellite facilities last week with Senator Gene Yaw, who also chairs the Penn College board and I’ll be sharing a lot more of what I learned (there’s a lot to tell), so stay tuned.

One thought on “Penn College Spurs A Pennsylvania Renaissance – Part I”