The NRDC gang of aristocrats wants to make a wilderness of the Catskills. Exxon stands in the way so the gang is criminalizing speech to try to shun them away.

The NRDC gang, its interconnections and how it operates is a frequent focus of these pages. The Natural Resources Defense Council is the hub of a wheel of organizations run by all the same people. They seek to plow under any development of the Catskills region and return it to wilderness, except for the estates its elites maintain there, of course.

The NRDC gang is also involved in land scams threatened by the higher land prices fracking produced when XTO, now an ExxonMobil subsidiary, leased thousands of acres of land in the Deposit, New York area for over $6,000/acre in some cases (not including royalties), which was several times its real estate value. Shooing Exxon/XTO away from the Catskills is, therefore, critical to the NRDC gang and they are criminalizing speech in an attempt to do it, using their connections with New York Attorney General Schneiderman, among others, to get the job done. 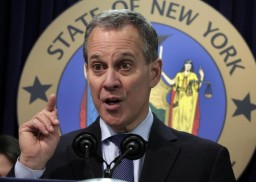 Our friend Jim Willis wrote about Schneiderman’s witch trial against ExxonMobil the other day over on his MDN site and here and I added a lengthy editor’s note reminding readers of all Schneiderman’s NRDC gang connections, which are numerous. I also wrote about this back in 2012 over at Energy In Depth, explaining how Schneiderman has done their bidding over and over again, from participating with them in the harassment of Deposit area local officials, to lawsuits, to publishing NRDC material on the AG’s website.

Schneiderman is the government capo for the NRDC gang don and now, like any good member of the family, he’s doing what needs to be done and is going after ExxonMobil, claiming their political speech of years ago was somehow criminal because it doesn’t align with the company line now. Call it a shakedown or call it intimidation; it has the same ultimate goal of creating leverage to get the company to leave the Catskill/Delaware region.

We see the same pattern with the Delaware Riverkeeper and others’ harassment of ExxonMobil over the New Jersey refinery case and, of course, the Riverkeeper and its funder, the William Penn Foundation, are closely allied with the Open Space Institute, one of the most important spokes in the NRDC gang wheel. We see the pattern, too, in the RICO lawsuits being promoted all over the place by the likes of Senator Sheldon Whitehouse and a group of double-dipping, high-earning faculty members at George Mason University. 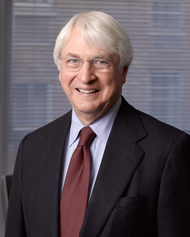 But, how did this strategy of criminalizing speech for shakedown and/or intimidation arise? Well, the answer to that takes us straight back to the NRDC gang. It arose from an expensive confab held in 2012 in LaJolla, California, which was organized by the Union of Concerned Scientists. The conference was financed by, among others, the V. Kahn Rasmussen Foundation, which is one of Bill McKibben’s (of 350.org) major funders. Both it and 350.org are closely associated with the Rockefeller family which. of course, is the force and the money behind the NRDC gang (with fractivist Rasputin Jay Halfon orchestrating things for them).

A summary report from the session is published here and among the attendees at this elitist pow-wow was a man named Richard Ayers. He is a true “super-lawyer,” not the kind who puts out Yellow Book backs telling us they are, and he’s the co-founder and current trustee of the NRDC – a bosom buddy of John Adams, the NRDC gang godfather, the chair of the land-scamming Open Space Institute and the father of the Catskill Mountainkeeper, Ramsay Adams. Ayers was there as one of the seasoned veterans or wise ones from the environmental movement to suggest how the powers to be of that movement might go after the oil and gas industry and produce some “outrage” that might rise the ire of the public and create the will to shut them down.

Here’s what the summary report said about Ayres and his recommendations to the LaJolla group:

Richard Ayres, an experienced environmental attorney, suggested that the RICO Act, which had been used effectively against the tobacco industry, could similarly be used to bring a lawsuit against carbon producers. As Ayres noted, the RICO statute requires that a claimant establish the existence of a “criminal enterprise,” and at least two acts of racketeering (with at least one having occurred within the past four years). It is not even clear, he added, whether plaintiffs need to show they were actually harmed by the defendant’s actions. As Ayres put it, “RICO is not easy. It is certainly not a sure win. But such an action would effectively change the subject to the campaign of deception practiced by the coal, gas, and oil companies.”

Right there, in that short statement, is the birth of the movement to criminalize the speech of the oil and gas industry, the foundation for Sheldon Whitehouse’s ideas (as if the man ever had any of his own) and the basis of Eric Schneideman’s pursuit of ExxonMobil, on behalf of the NRDC gang (and its allies, of course). The whole thing has been helpfully advanced along the way by Inside Climate News, which, of course, is yet another part of the Rockefeller enterprise and, therefore, closely connected to the NRDC gang.

Schneiderman has been closely following orders, too, for on page 11 of this 2012 report we find this:

The overall strategy couldn’t be more obvious. But, pages 22 and 23 provide a few more insights with this observation by Ayres:

Many participants agreed about the importance of framing a compelling public narrative. Dick Ayres added that the simple act of naming an issue or campaign can be important as well. After acid rain legislation passed in 1990, he recalled, an industry lobbyist told him, “You won this fight 10 years ago when you chose to use the words ‘acid rain.’”

Then there are these comments from others:

Every hazard is unique, with its own personality, so to speak. Does it pose a risk to future generations? Does it evoke feelings of dread? Those differences can make an impact on strategy…

Claudia Tebaldi said she believed “there is a big difference between convincing people there is a problem and mobilizing them. To mobilize, people often need to be outraged.”

The whole thing is a gigantic game of intimidation to these people; create dread, manufacture images of criminality and conspiracy and mobilize people. And, for what purpose? Well, to create the circumstances that will lead the oil and gas industry to retreat like a cowering dog, leave the Catskills alone and allow strategic parkification – the making of elitist wildernesses everywhere else – to proceed.

12 thoughts on “The NRDC Gang and Its Battle Against Exxon”