Bill McKibben has been shilling for the Rockefeller family for a very long time, trusting and turning to fit their evolving special interest agenda.

The Western Journal published a piece on Bill McKibben the other day that caught my attention as an observer of the Rockefeller family’s ubiquitous influence over all things fractivist in nature. Bill McKibben is a quick on his feet smooth talking guy who is able to adapt to circumstances. He’s been adapting a lot on the subject of natural gas, the special interests of his benefactors having evolved with the shale revolution. 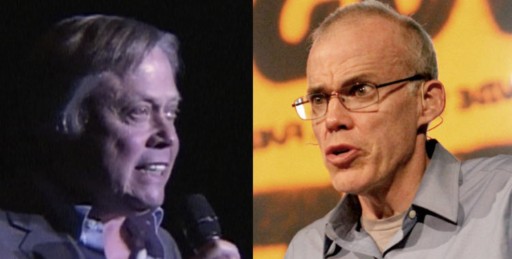 Here’s the end of the Western Journal story on Bill McKibben, which, for me, is really the beginning:

McKibben was singing a different tune in 2009 when he felt so strongly about power plants switching to natural gas he was willing to be jailed in support of the cause. He was one of several celebrities who protested on Capitol Power Plant’s front steps in Washington, D.C.

“There are moments in a nation’s — and a planet’s — history when it may be necessary for some to break the law … We will cross the legal boundary of the power plant, and we expect to be arrested,” McKibben told reporters prior to the March 3, 2009, protest.

Get in the DeLorean and set the dial for 2018 and Bill McKibben is telling Yale Environment 360 this:

Here’s the trouble: carbon dioxide is the main greenhouse gas, but it’s not the only one.  Another one — present in smaller amounts, but far more potent — is CH4, otherwise known as methane, the primary component of natural gas. If you burn natural gas, you get less carbon dioxide than with coal. But any methane that escapes unburned into the atmosphere on the way to the power plant warms the planet very effectively — so effectively that if you leak more than 2 or 3 percent it’s worse for climate change than coal…

In fact, the conversion to natural gas is making things markedly worse because the money that gets spent on this useless transition locks us into burning fossil fuel when, with each passing month, the actual alternatives of sun and wind get cheaper and more available. If we hadn’t discovered fracked natural gas, the effort to deal with climate change would have moved us far more quickly into renewables; instead, we’ve wasted a decade and likely far more, since all those new pipelines and power plants are designed (and financed) to last for 40 or 50 years.

Howarth’s work has been criticized in the past for using too short a time frame. He uses a 20-year window to study the global warming potential of methane emissions in the atmosphere as opposed to the more common 100-year horizon.

Why has McKibben shifted his position so dramatically in nine years? That is the question that ought to be asked. The answer is two-fold.

First, its important to understand Bill McKibben owes everything to the Rockefeller family. He works at Middlebury College, where Steven Clark Rockefeller happens to have been influential and here’s what I pointed out two years about that:

…Steven Clark Rockefeller, the son of Nelson Rockefeller, the former Governor of New York and Vice-President, is one of the trustees of the Rockefeller Brothers Fund, which funds all sorts of fractivist groups, including the Sierra Club, the Sustainable Markets Foundation, the League of Conservation Voters and 350.org. The last of these, of course, is the radical divestment group headed by that oracle of environmental doom, Bill McKibben. McKibben, not so coincidentally, is stationed at Middlebury College where Steven Clark Rockefeller is a professor emeritus of religion and previously served as college dean and chairman of the religion department.

Not only does McKibben operate under the shadow of Steven Clark Rockefeller at Middlebury, but the Sustainable Markets Foundation is run by Fractivist Rasputin and Rockefeller sycophant Jay Halfon. Halfon is on the board of McKibben’s 350.org and the Park Foundation, which just happens to be a principal funder of much of Bob Howarth’s work and, along with the Rockefellers, of much of fractivism. The whole thing is one gigantic orchestrated puppet show with Bill McKibben playing the star puppet role as Halfon, the Parks and the Rockefellers pay for and direct the whole show.

Secondly, it’s important to appreciate exactly what it that motivates all this fractivism and funding on the part of the Rockefellers and their allies. There is always the desire of people such as Adelaide Park Gomer for guilt assuaging influence and recognition. It is, too, partly an unholy alliance with trial lawyers, as we’ve laid here multiple times and Jay Halfon being intimately connected to the trial lawyer community and their rainmaking PIRGS. Then, there are also the special financial interests in solar energy, for example, and in China.

The biggest of the special interests in play vis-a-vis McKibben’s change of heart, though, is the Rockefeller “strategic parkification” campaign; it’s land scams. We’ve addressed this numerous times here, as well, especially with this post on how the family has been engaged in “Making A Wilderness” for a very long time. Questions No. 8, No. 9 and No. 10 from this post, show how it’s done. Moreover, it’s done with a view toward protecting the land around other private Rockefeller holdings, which it desires to acquire on the cheap through these land scams.

The shale revolution raised a serious threat to this entire scheme. The higher land prices wrought by the shale revolution, in fact, would have made it impossible for the Rockefeller family, Bill McKibben’s food source, to continue their parkification. No longer would they be able to continually roll over profits from buying and selling land to the state using state money to do so, thereby swelling the sizes of their private playgrounds. This is what it;’s all about in the main and why Bill McKibben changed his mind so dramatically in nine years. Gas was great when it didn’t threaten Rockefeller special interests but now that it does, well…

McKibben, of course, would have everyone believe methane is a serious issue (it is not) and that he’s an independent agent, but he’s duplicitous, as we explained here in showing how he denied knowing much of anything about his principal funders. He’s just a shill for Rockefeller special interests. Nothing he does is surprising if you know who he really is.