The Rockefeller front group 350.org is opposing the proposed Cove Point LNG terminal, demonstrating, yet again, environmentalism today is, above all, about protecting social privilege.

Jim Willis related a story the other day about 350.org, noting how radical the group was and its opposition to the Cove Point LNG facility in Maryland. He also observed that its kooky leader Bill McKibben, had Tweet-endorsed a Ku Klux Klan type rally and a related demonstration at the home of an Enbridge Energy board member Mark Maki. Enbridge is involved with the Keystone Pipeline and a small band of cowards covered their faces and burned torches at a rally after demonstrating in front of Maki’s home with the support of McKibben.

When the whole thing was exposed by Watts Up With That, the cowards took down their radical self-congratulatory web page but, of course, it had already been preserved. You can read all about here, here and here but these posts don’t tell the most interesting part of the story, or who the real white sheet cowards are. The anti-fracking, anti-Keystone, anti-fossil fuels and anti-Cove Point efforts of 350.org are all financed by the Rockefeller family, which made its fortune from oil.

350.org Is a Rebranded Rockefeller Initiative

The group 350.org is a rebranded version of McKibben’s earlier “Step-It-Up” campaign and was formed with Rockefeller family assistance through the Sustainable Markets Foundation, about which we have written several times. The latter funds some of the slimiest anti-fracking campaigns imaginable. 350.org now takes in about $3.6 million per year. The board includes not only McKibben but also trial lawyer advocate Jay Halflon, who heads up the Sustainable Markets Foundation. It is, therefore, still very much a Rockefeller entity and received over $500,000 directly from the Rockefeller Brothers Fund and Rockefeller Family Fund in 2012 according to 990 returns made by those organizations. 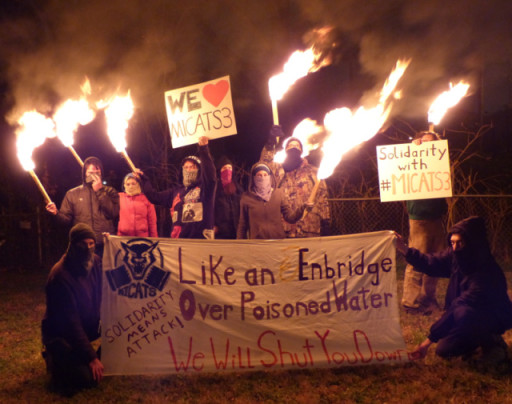 Yet, Bill McKibben, the public face of 350.org and one of its five directors three years ago when the video below was made (he’s now President), would have us believe the organization is “not very well” funded, and uses phrases such as “to the extent we have any money at all.” Apparently, $3.6 million per year is chump change to this guy. Plus, get this; he pretends he doesn’t know if the Rockefeller family still funds his organization.

Ask yourself, if you were a director of an outfit virtually synonymous with your name, that supposedly wasn’t very well funded and was started with the help of someone who continued to give you over half a million dollars annually, could you credibly claim not to know it? No, Bill McKibben is either a liar or the dumbest man in the environmental movement. Unfortunately, it’s a toss-up as you’ll see from watching this video (watch the full video here for more entertainment):

This isn’t all McKibben seems to have relegated to the dark recesses of his mind. The Financial Post did some investigation of the man last year and found this:

350.org has the look and feel of an amateur, grassroots operation, but in reality, it is a multi-million dollar campaign run by staff earning six-digit salaries.

By my analysis of information from the U.S. Foundation Center and the tax filings of American charitable foundations, McKibben’s campaigns have received more than 100 grants since 2005 for a total of US$10-million from 50 charitable foundations. Six of those grants were for roughly US$1-million each.

In the interest of fairness and transparency, McKibben should fully disclose 350.org’s funding and the Rockefellers and other charitable foundations that have been bankrolling the anti-Keystone campaign should come out from the shadows.

Since 2006, McKibben has led three campaigns: Step it Up, 1Sky and 350.org. Each campaign built on the previous one. In the summer of 2006, Step it Up organized a protest walk across Vermont to push for a moratorium on coal-fired power plants and other federal actions. Created in 2007, 1Sky began a national movement to jump-start a clean energy economy. 350.org built on 1Sky and in April of 2011, the two campaigns officially merged.

More than half of the US$10-million came from the Rockefeller Brothers Fund (RBF), the Rockefeller Family Fund and the Schumann Center for Media and Democracy, where McKibben, a trustee, was paid US$25,000 per year (2001-09). Since 2007, the Rockefellers have paid US$4-million towards 1Sky and 350.org, tax returns say. The Schumann Center provided US$1.5-million to McKibben’s three campaigns as well as US$2.7-million to fund the Environmental Journalism Program at Middlebury College, in Vermont, where McKibben is on staff.

McKibben has been less than forthcoming about a lot of things it appears and there’s much more here. Finally, just to add the final insult, his organization has also been funded by the Park Foundation, the foremost funding fount for all fractivist activities, and certainly one of the most elitist. The Park Foundation has one redeeming feature, though; it doesn’t hide its activities or pretend it isn’t funding everything anti-fracking. 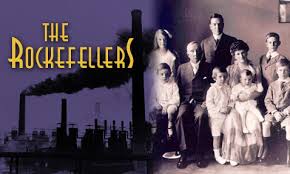 The Rockefeller clan and their allies, by contrast, are always behind the scenes, using front groups like 350.org and the Sustainable Markets Foundation to do their dirty work.  They don’t want anyone with masks and torches outside their homes, so they get guys like McKibben to fire up the true believers with the fervor of religious environmentalism and then pat them on the back from a distance for jobs well done.

The opposition campaign to the Cove Point LNG facility is that sort of effort. The news stories say the Chesapeake Climate Action Network (CCAN) “enlisted the help” and “partnered” with 350.org, but a review of 990 returns indicates the Sustainable Markets Foundation was one of the early funders of CCAN, as it was for 350.org. It’s the same people behind the facades, in other words, acting out through different groups. Their agendas are largely identical and may be summed up as “if its oil or gas, we’re against it.

It seems a strange position for the most famous oil people in the world to take unless one grasps the nature of the second-generation guilt at having done so undeservedly well in their own eyes. It’s apparently what drove John D. Rockefeller, Jr. to work with Ida Tarbell, his father’s nemesis. It’s rampant among the trust-funder types who fund fractivism and every left-wing cause imaginable. From their perspective it’s a beautiful thing; they get to demonstrate their social consciences while giving up nothing and it’s at the heart of so much of environmentalism. 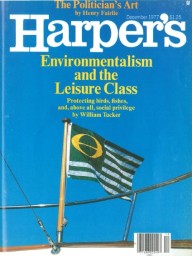 From everyone’s else perspective, except for the truly gullible, it is an enormous concentration of wealth aligned against change and, especially, economic development that might benefit lower and middle classes. It is the American aristocracy; the leisure class about which William Tucker wrote for Harpers Weekly back in 1977.

Subtitled “Protecting birds, fishes, and above all, social privilege,” his 37-year old piece nails our current situation in dealing with Rockefeller type front groups such as 350.org. Here are a few of his most poignant observations (emphasis added):

There was another thing that disturbed me about environmentalism. That was the way it always seemed to favor the status quo. For people who found the present circumstances to their liking, it offered the extraordinary opportunity to combine the qualities of virtue and selfishness…

The great appeal environmental solutions offer is that they can he worn like a badge of success. To say that one is an “environmentalist” or that one favors “no-growth” is to say that one has achieved enough well-being from the present system and that one is now is now content to let it remain as it is – or even retrogress a little because one’s material comfort under the present system has been more or less assured…

Environmentalism has presented itself to us as a form of “science,” but it on!y borrows the language of science to serve its purposes. It is not scientific, either in its origins or its methods. It could easily turn anti-scientific and already has in many instances.

Wow. Was that guy prescient or what? Those words perfectly describe what’s going on with 350.org’s battle against LNG at Cove Point and the Rockefeller and Park family battles against fracking everywhere. It isn’t about the science. And, they couldn’t care less about what these things mean to the rural Northeast needing the economic development, their urban neighbors needing the cleaner and less expensive energy or the people of Ukraine and Europe straining to secure our gas and get outside the reach of those Russian bear claws. The Rockefellers are living a life of social privilege. Better yet, they don’t even have to get their hands dirty when they have toadies like Bill McKibben willing to hide their faces while Tweeting out high fives to bands of youths with masks and torches outside someone else’s home.