Revelations of a real-life RICO type conspiracy by the Rockefeller family and friends to attack Exxon only begin to illustrate the much bigger story.

Other than the Lincoln assassination, which was but a small one, I’m not much of a believer in conspiracies. They typically aren’t necessary when you have groups of people committed to political groupthink anyway; everyone involved follows the playbook without being told because it’s part of their culture. There is such a thing as organized crime, though, and even a statute designed to combat it. It’s called the Racketeer Influenced and Corrupt Organizations Act (RICO) for short. Criminal prosecutions, as well as civil lawsuits are permitted under RICO. It may well be time for businesses and individuals impacted by what appears to be a clear case of racketeering by the Rockefeller gang to file a civil lawsuit against them. 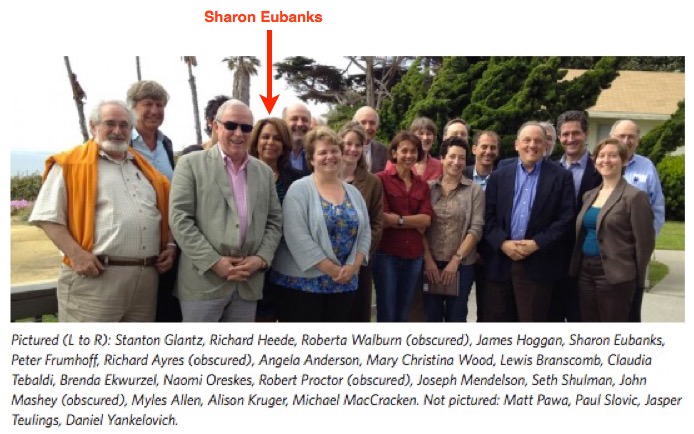 The “La Jolla Junta,” including their RICO expert, Sharon Eubanks

What I’m talking about, of course, is the recent story in the Wall Street Journal regarding the appalling efforts of New York State Attorney General Eric Schneiderman to implement the NRDC agenda through a trumped-up criminal prosecution of Exxon for supposedly hiding knowledge of climate change. I wrote about it here, explaining the NRDC agenda to criminal speech and use RICO to go after the oil and gas industry. As I explained then, the strategy “arose from an expensive confab held in 2012 in LaJolla, California, which was organized by the Union of Concerned Scientists. The conference was financed by, among others, the V. Kahn Rasmussen Foundation, which is one of Bill McKibben’s (of 350.org) major funders. Both it and 350.org are closely associated with the Rockefeller family which. of course, is the force and the money behind the NRDC gang.”

Here’s some of what the Wall Street Journal has now brought to the surface (emphasis added):

A key meeting in the new push unfolded in January behind the closed doors of a Manhattan office building. The session brought together about a dozen people, including Kenny Bruno, a veteran of environmental campaigns, and Bill McKibben, founder of 350.org, two activists who helped lead the successful fight to block the Keystone XL pipeline.

The new campaign’s goals include “to establish in public’s mind that Exxon is a corrupt institution that has pushed humanity (and all creation) toward climate chaos and grave harm,” according to an agenda of the meeting viewed by The Wall Street Journal.

This new legal strategy stems in part from environmentalists’ frustration at what they see as the inadequacy of recent climate deals. Their hope is to encourage state attorneys general and the U.S. Justice Department to launch investigations and lawsuits that ultimately will change Exxon’s behavior, force it to pay big damages and drive public attention to climate change.

“It’s about helping the larger public understand the urgencies of finding climate solutions,” said Lee Wasserman, director of the Rockefeller Family Fund, which hosted the January meeting. “It’s not really about Exxon.”

…A key part of the activists’ strategy is to seek documents that show otherwise: that Exxon, despite knowing the dangers of climate change, has sought to challenge the scientific consensus. Such revelations would help “delegitimize [Exxon] as a political actor,” the January agenda said…

The activists are focusing on internal Exxon documents that have surfaced in news outlets—including in publications or investigative projects that were funded partly by the Rockefeller Brothers Fund and Rockefeller Family Fund, which favor strong climate action. The media outlets involved—the Los Angeles Times and InsideClimate News—have said the reporting was done without influence by the funding sources.

If you believe that last line – that the reporting was done without influence by the funding sources – you might want to read this story about Inside Climate News, which is nothing more than a Rockefeller outlet. What’s even more interesting is the followup reporting by Energy In Depth and the Washington Free Beacon, which went deeper and provided access to the e-mail invitation that was the focus of the story. Here it is: 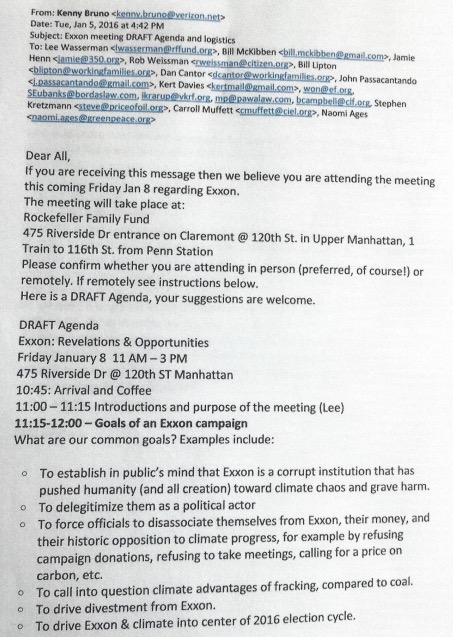 There are two aspects to this e-mail that strongly suggest Exxon should be filing a RICO lawsuit against the Rockefeller gang. First, is the overwhelming evidence of intent to damage Exxon’s business or property by what appears to be a racketeering enterprise. The e-mail shows, beyond any doubt, the purpose of this group getting together at Rockefeller headquarters was to destroy Exxon’s reputation, delegitimize the company, force disassociation of others from it and to drive divestment from the business, not to mention making it a political target. Tell me this isn’t racketeering of the highest order – the Mafia style shakedown of a company; for speech no less. The Rockefeller/NRDC gang is engaged in precisely the same kind of activity it strategized alleging against Exxon as part of its 2012 game plan.

The second aspect of this e-mail that bears great attention is the array of players, which exhibits the very sort of conspiracy the Rockefeller/NRDC gang wants to project upon Exxon. It is, moreover, the same set of people involved in fueling fractivism. Here’s a little rundown on each:

The patterns here couldn’t be more apparent. The recent explosion of news about the effort to target Exxon tell only a small part of what is a huge story; a tight conspiracy of extraordinarily wealthy special interests, among whom the Rockefeller clan is the big gorilla in the room, engaging in a deliberate campaign to impact specific businesses and individuals and shake them down or shut them down. It’s more about fracking than it is about Exxon and the goal is to make a wilderness of the rural Northeast while allowing the Rockefeller family and its friends to develop oil and gas overseas without US competition, while also sucking off the “green energy” teat here at home at the expense of taxpayers and ratepayers.

Look at the list of who’s was involved in this planned meeting at the Rockefeller Family Fund, read the report from the La Jolla Junta war council and tell me this isn’t racketeering; racketeering that ought to stopped by enforcing RICO. It’s time to RICO the Rockefellers.

15 thoughts on “Is It Now Time for a Rockefeller RICO Lawsuit?”