All you need to do to see the shale gas difference is compare two counties 20 miles apart; one with shale gas development and one under a state moratorium.

Sometimes just some very simple charts tell the natural gas story with very words, illustrating the shale gas difference. Consider the case of Sullivan County, New York, the northwestern corner of which appears to have some Marcellus Shale gas potential and cannot develop those resources because New York State refuses to act on already prepared regulations.

Instead, that state is running scared of the NRDC and their friends who would have us believe the future of Upstate New York is bound up with keeping nothing from happening that might offend them. Sullivan County was once a booming resort hotel area–the heart of the Catskills–but those days are long gone and its economy has been struggling ever since.

A scant 20 miles away, in Susquehanna County, Pennsylvania, which was in the doldrums for decades and decades, the picture is far different. Susquehanna County has shale gas, immense quantities of it, and gas companies have already spent billions developing it and are planning to spend billions more in the next 3-4 years. Things are alive, restaurants that couldn’t possibly make in Sullivan County are thriving and landowners who were in survival mode before are now prospering, all due to shale gas that Pennsylvania allows Susquehanna County to develop.

The shale gas difference can be summed up in simple charts that compare key data for the two counties. Consider these: 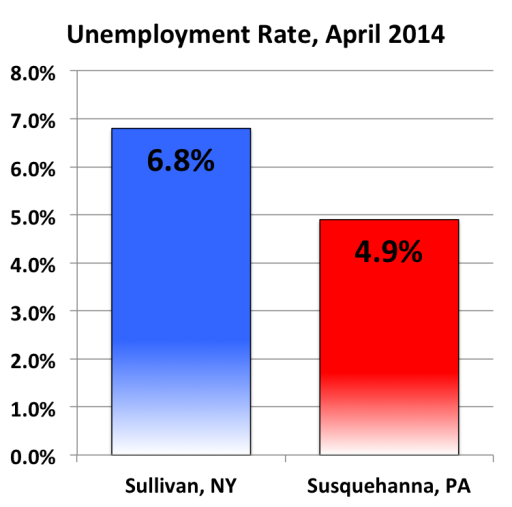 Unemployment in Sullivan County was 1.9 percentage points or 39% higher than Susquehanna County’s rate in April of this year (latest data available). Ten years earlier, in 2004, Susquehanna County had the higher rate (5.6% vs. 5.3%).

Looking deeper, we see what’s happened. According to the Census Bureau (County Business Patterns data) Susquehanna County has grown its employment in accommodations and food service industries (traditional tourism) since shale gas came to town in 2007, while Sullivan County, which depends on tourism, has seen a precipitous decline of 28% in those jobs.  That’s why it’s desperately trying to secure casinos while the NRDC gang fights that as well. There’s a reason we call them the “PovertyKeepers.” 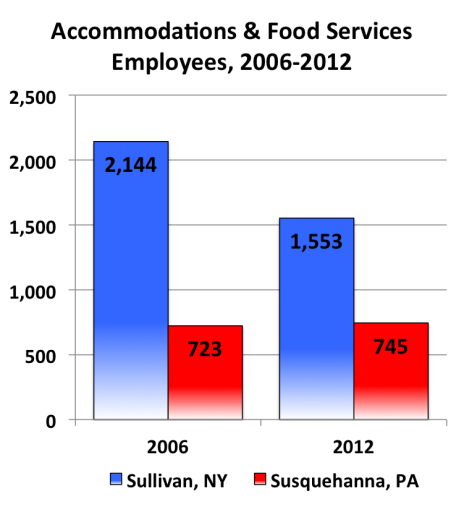 So much for the idea tourism will be destroyed by shale gas development. No, the truth is that tourism increases even during times of economic recession when other tourist areas are suffering big-time. That’s the shale gas difference.

Now, let’s look at the formation of business establishments over the same period: 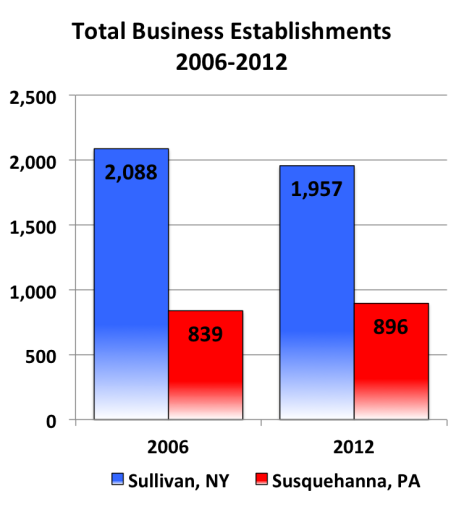 Yet again, we notice Sullivan County has witnessed a 6.3% decline in the number of business establishments, while they’ve grown by 6.8% in Susquehanna County–the shale gas difference. That’s because there’s more money circulating. 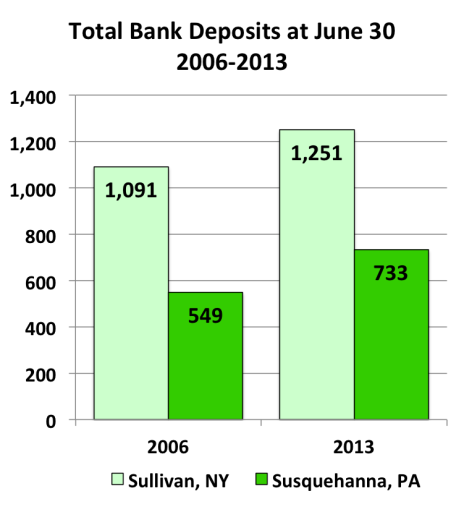 The influx of money into Susquehanna County is apparent from the above graph, which shows local bank deposits recorded by FDIC grew by $184 million or 33.5%. Sullivan County, despite the presence of many wealthy individuals who reside in the county or have second homes there (a Census estimated 455 homes worth $1 million or more) experienced a gain of only $16 million or 14.7%.

Those folks with the pricey homes don’t invest much in Sullivan County outside their homes, it appears. But, in Susquehanna County (which has only 155 such homes), the money stays there for others to use; the exact opposite of what fractivists would have us believe, of course. It’s those actors and Manhattanites who want Sullivan County to stay exactly as it is for their enjoyment and, therefore, oppose natural gas development, who leave their money elsewhere and do little for the economy. 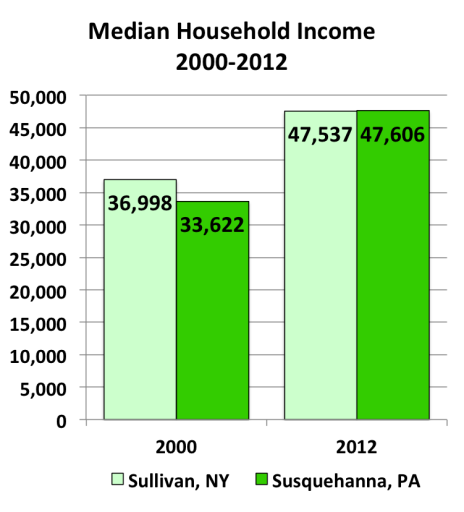 Susquehanna County, according to the latest Census Bureau surveys, now has a higher median household income than Sullivan County. It was 9.1% lower in 2000. Whatever could be the cause of that? The shale gas difference, maybe?

The data is overwhelming. Sullivan County is in a downward cycle due to its heavy dependence on tourism, which is always far better employed as a supplementary part of the economy, given its cyclical nature. Susquehanna County, though, is on a long overdue rebound due to the shale gas difference. Meanwhile, the same people who are fighting shale gas in Sullivan only want certain types of tourism. You know, the sort that attracts their own kind and not the rabble like the rest of us who need real jobs.