Every day there is further demonstration natural gas is the fuel of the foreseeable future, if there is such a thing, providing a model of sustainable development for rural America.

Sustainability is one of those concepts that is always defined in the mind of the beholder. The EPA provides a useful definition, though, that most of us can probably agree makes sense:

Sustainability creates and maintains the conditions under which humans and nature can exist in productive harmony, that permit fulfilling the social, economic and other requirements of present and future generations.

The EPA puts the emphasis on the “productive harmony” of humans and nature, which is a lot like the old definition of conservation as “wise use” of natural resources. That’s interesting isn’t it? Moreover, their definition isn’t all about the environment but, rather, fulfilling the needs, including economic ones, of humans for multiple generations. I like it. Natural gas is doing just that and in a place that our friends on the other side once loved to throw in our face–Susquehanna County, where Dimock is located.

How is that natural gas is “fulfilling the social, economic and other requirements of present and future generations,” to which the EPA says we should aspire to be sustainable? Well, there are four distinct ways.

First, there are the earnings to landowners in the form of lease revenue and royalties, which have saved many farms and pumped up economies. Seven of the top 10 producing wells in the Marcellus Shale are found in Susquehanna County with another in next-door Bradford and, as of a few months ago, these Cabot Oil & Gas and Chief Oil & Gas wells were producing nearly $50,000 per day in royalties for property owners, not to mention bonus payments made earlier. That money gets recirculated in the local economy several times.

Secondly, there are the jobs. This report from the Pennsylvania Regional Economic Analysis Project (REAP) tells all; Susquehanna County is growing jobs rather rapidly, good jobs that pay $35,000 more than average, according to an economist who spoke at the Lackawanna College “Economics of Shale” event last week and cited this figure. Moreover, they virtually all come from natural gas “mining” as a foundational source of jobs. Read the report and the facts will fly out at you.

Here are a couple of graphs from the REAP: 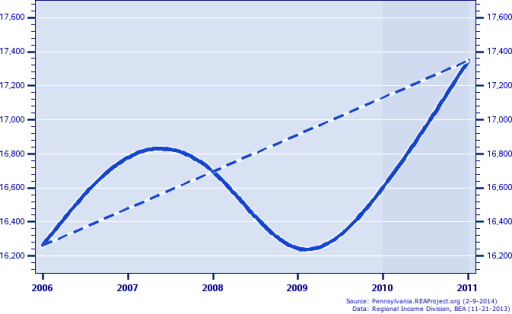 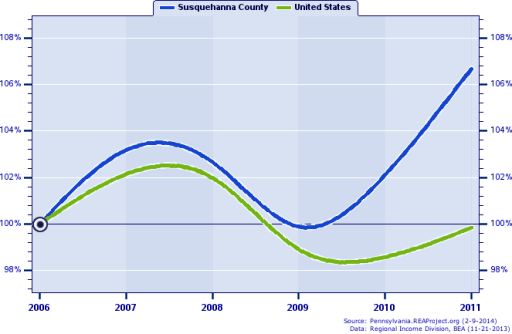 Since then employment has continued to increase and the unemployment level is now at 5.8%, well below the Commonwealth and US as a whole.

Thirdly, there is the whole Compressed Natural Gas (CNG) story that we told earlier, as natural gas industry equipment and vehicles are now being powered by the natural gas. A CNG station is open to serve the industry and another is planned in Montrose as a private venture. These stations are powering truck fleets and other equipment at low costs and ensuring cleaner air in the process, reducing emissions everywhere.

Finally, there is the extension of natural gas service to rural communities in Susquehanna County, which is lowering costs for homeowners and businesses alike. Leatherstocking Natural Gas is a natural gas distribution company that is now serving the community of Montrose, County Seat of Susquehanna County with natural gas for the first time ever and the story cannot be told better than WNEP Channel 16 TV told it recently:

BRIDGEWATER TOWNSHIP — This is the first winter that natural gas has been an option to heat homes in Susquehanna County.

A company ran the first gas lines to homes near Montrose this fall.

Homeowners who were able to switch to natural gas are thrilled seeing the savings in this bitter cold winter.

Natural gas is fueling a new heater at Puzo’s Auto Shop near Montrose and Lane Puzo is thrilled about it.

We first met him last year, when he learned natural gas service was coming his way.

“Before when you were here, you asked if I was going to save money. I said ‘I sure as hell hope so.’ Well, I sure as hell am, let me tell you,” Puzo said.

Puzo’s garage is hooked up and as is his home across the street.

“This is what I said in the beginning when they first came here is I don’t mind them being here, the only thing I was saying is ‘why don’t we get the gas?’” said Richard Geiger of Bridgewater Township.

Geiger showed us his new natural gas fueled boiler he used to heat with oil. He doesn’t even want to think about how much he’d be paying for that this cold winter.

“You’re talking hundreds of dollars.  Just last month, the whole month was $138. I couldn’t touch that.”

“I’m happy to really see it for people, because people do need a break on what they’re spending for energy costs,” said Paul Augenti of Augenti Plumbing and Heating.

Augenti still heats with coal but that’s only because he runs a plumbing and heating business and has been busy helping switch his neighbors to natural gas. He, too, is making the change soon.

Leatherstocking Natural Gas plans to expand natural gas service to homes and businesses in Montrose next year and other communities in Susquehanna County in the years to come. 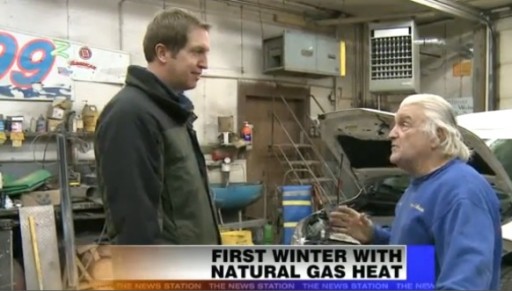 And that about says it all doesn’t it? The story was forwarded to me by a member of the Joint Landowners Coalition of New York, who thought it a great example of sustainability, the kind the Southern Tier of New York, where he resides, could use as well. I couldn’t agree more. Natural gas offers a model of sustainability for rural economies suffering everywhere. This is the way up.

1 thought on “Natural Gas – A Model of Sustainability”