Tom Wolf is taking to Facebook today to answer questions on his proposed Pennsylvania budget. I doubt many Facebook folks are interested but I have a few budget questions.

Some, perhaps most, politicians have a dim condescending view of their constituents because so many are swayed by incredibly shallow campaign ads with only the slightest connection to the truth. They begin to believe they actually can fool all the people all the time. Pennsylvania Governor Tom “Tax and Spend” Wolf is that kind of personality and later today at 1:30 PM will go on Facebook to conduct a “live town hall” and take questions on his proposed budget. We see more and more of these gimmicks as politicos move further away from the people in real life but still want to maintain at least the facade of a town hall. 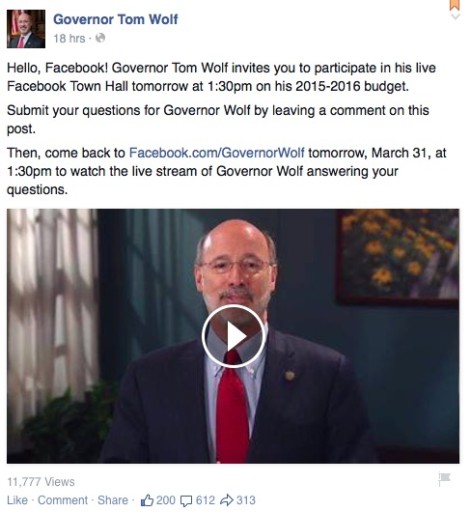 This Facebook town hall event will, it can be safely predicted, be a modern-day Potemkin Village exercise where Wolf explains all he wants to do for education, Pennsylvania and the people without having to answer a single embarrassing question or wipe that ever-present smile off his face. No, he’ll take questions from people such as the guy who left this comment on his Facebook page, which speaks for itself as to naivety:

This is a decent budget. People need to understand that if you want a balanced budget, there is going to be tax increases. 3.07 to 3.7% is not bad. It is much lower than other states. Also 6-6.6% is long overdue.

Still, one wishes it might be otherwise – a real town hall on social media where the governor was forced to take hard questions and the questioners were allowed follow-ups to challenge the spin – could be great fun. Here are some of the budget questions, I’d ask:

Not that I’m expecting any answers, but perhaps some of you will ask anyway.