Tom Wolf is already well on the way to earning a reputation as Tom Tax and Spend with his “steal from the poor, give to the rich” severance tax scheme.

Tom Wolf supposedly divulged details of his severance tax and spend proposal yesterday at the Caln Elementary School in Thorndale, Pennsylvania, supposedly one of the poorest school districts in Chester County. There were damned view details unless you count the fact he revealed he wants to tax natural gas coming and going and he clearly wants to steal from the poor areas of the Commonwealth to pad the wallets of his public employee union supporters.

The choice of venue for the announcement by Tom Tax and Spend was unusual in that Caln Elementary is located in Caln Township and is part of the Coatesville Area School District. Being poor in Chester County is like being cold in Florida.

Chester County has an estimated average household income of $113,472 according to the Census. That’s about 60% above the Pennsylvania average. Admittedly, it’s a little lower in Caln Township ($85,680), where the average household only earns 21% more than the Commonwealth as a whole. The Coatesville Area School District average was $79,936 or 12% above the state average. Poor?

Compare that to Susquehanna County’s Elk Lake School District which, at $63,575 (up recently due to the shale boom) is still 11% below the state average. Guess which one Tom Wolf, Tom Tax and Spend wants to help? If you guessed Coatesville, you understand what his severance tax is all about – rewarding public employee unions who supported his candidacy. He’s willing to sacrifice the progress of Elk Lake to ensure Coatesville doesn’t have to live within its means.

The same pattern is evident throughout the gas drilling areas of Tom Tax and Spend’s state. They have been traditionally poorer areas finally, at long last, getting an economic break from natural gas development, but Wolf is determined to penalize what’s helping them and steal as much of the revenue as possible for communities in Chester County and the like who aren’t happy unless they’re getting most of the money and for public employee union who created the pension problem we now have. Here’s how it stacks up for four counties in the gas regions of Pennsylvania compared to Chester County: 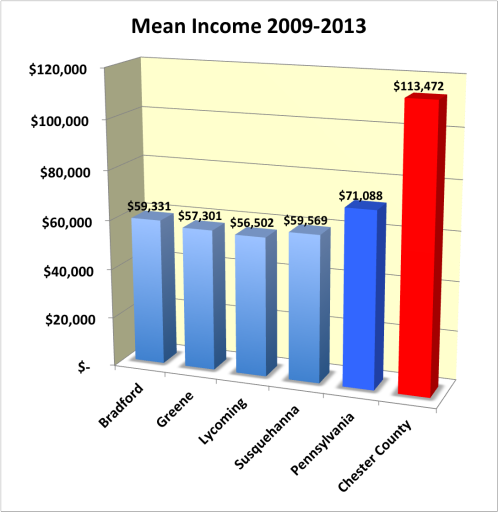 And, here’s how it looks for some of the school districts in the gas regions compared to “poor” Coatesville: 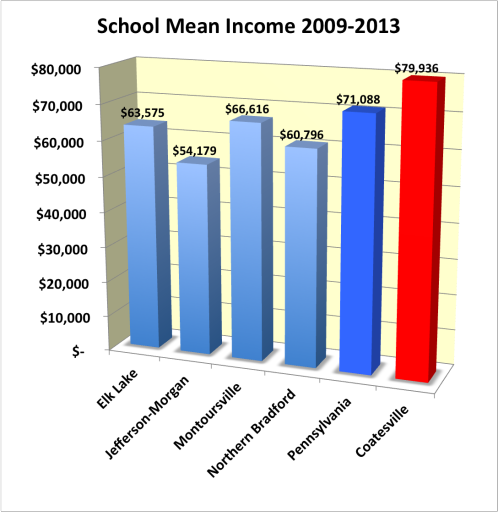 It’s not hard to see what’s happening here, is it? Moreover, if the Coatesville Area School District has issues, perhaps it has something to do with the fact corruption apparently abounded in the District, according to this article:

…the school district hired the Philadelphia law firm Conrad O’Brien in 2013 to look into district finances and the conduct of administrators and school board members.

“The report paints a picture of a school district that for years existed in a culture of corruption, deception, and mismanagement,” Superintendent Cathy Taschner wrote in a letter to parents Sunday. “But it also includes a very important piece of information: that we have made dramatic strides over the last six months.”

Beth Trapani, the district’s spokeswoman, said most of the personnel changes so far have been at the administrative level. She declined to say who and how many people have been affected and noted that the district does not comment on specific personnel issues.

The school board voted in December to publicly release the taxpayer-funded report, which Conrad O’Brien finished in April and added to in July. School officials said that lawyers had taken several weeks to remove some names for legal purposes and that some new school board members had read the report for the first time.

The report also said the school district gave “unlimited months of medical leave” to an employee who allegedly falsified injuries he said he sustained working on and falling through the roof of Como’s house during work hours. The internal report also found that a teacher with multiple arrests for driving under the influence was not fired because of his friendship with Como.

The district turned its investigative report over to the Chester County District Attorney’s Office last summer in response to a subpoena. Thomas P. Hogan, the district attorney, had said the report would aid his office in its own investigation into district administrators.

Como and Donato were arrested on dozens of charges of theft and state ethics violations as a result of the District Attorney’s Office investigation.

Well, that’s certainly the type of school we want to help with a severance tax, isn’t it? This article appeared the day before Tom Tax and Spend decided to make the Coatesville Area School District his poster child for “helping the state’s financially strained public schools.” Hmmm…

None of this says much for Tom Tax and Spend’s competence. He wants to not only a impose a 5% severance tax on the value of the gas, but also a 4.7 cents per thousand cubic feet of gas extracted from the Marcellus Shale formation to “help restore public school aid cut under his predecessor, Republican Tom Corbett” he says. Of course, there was no such cut, only an ending to the temporary availability of economic stimulus money Ed Rendell used to avoid necessary public employee pension reform rather than create jobs. The jobs came later from Marcellus Shale development, which required no public “investment.”

Tom Tax and Spend is all about “investment,” of course. He wants to “invest” money stolen from gas companies, landowners and consumers to pay off public employee unions yet again, pushing reform even further away and making more “investment” necessary down the road.

All the while, he’s telling us consumer prices won’t be affected, landowner royalties won’t be affected and gas companies already dropping rigs due to low prices won’t be affected by higher costs of business. Everybody will keep their job, prices will stay the same, the state will continue to bring in as much income tax as before, landowners will earn as much as ever and the Coatesville Area School District will have even more money to clean up the financial mess it created for itself. His plan is to model West Virginia. I’m sure that’ll work out.

Ain’t it grand? If you like things the way they are, trust me, they’ll only get better, Tom Tax and Spend says. Yeah, right…

5 thoughts on “Tom Wolf or Tom Tax and Spend?”