We noted in our last post on Tom Tax and Spend Wolf just how remarkable it was the governor chose the Coatesville Area School District  in Chester County as the place to make his stand for a severance tax on Marcellus Shale development. The district is beset with corruption and financial mismanagement and perhaps the worst poster child he could have used to make his for turning over more money to public employee unions, which, of course, is what this all about. Chester County also has an estimated average household income of $113,472 according to the Census. That’s about 60% above the Pennsylvania average. But that’s just the beginning of the ironies. Tom Tax and Spend is a Rendell retread (without the winter studs).

We decided it might be worthwhile to look at the property tax base the Coatesville Area School District has, given most school revenue is based on the property base. The data is all available from the Pennsylvania State Tax Equalization Board and provides market values which allow for an apples to apples conversion of assessments by county and school district. What we found is this; property within the Coatesville Area School District had a market valuation of $4,030,076,198 in 2013 and the district had 7,165 enrolled students, according to the Pennsylvania Department of Education. That’s $562,467 per student of tax base, some $215,470 or 62% above the Pennsylvania average. 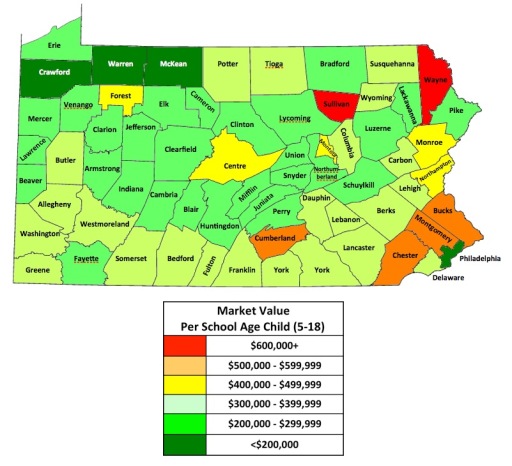 There are a few exceptions, such as my own home of Wayne County, where we have large numbers of second homes and summer camps to help pay the bills, but most of rural Pennsylvania, where gas drilling is taking place is well below average, while suburban Philadelphia, where Tom Tax and Spend wants the severance tax money to go, is way above average for the most part. This is the reality of what a severance tax would do; transfer money from poor counties such as Bradford, Clearfield and Lycoming to rich counties such as Bucks, Chester and Montgomery.

What it all demonstrates, as well, is that Tom Tax and Spend is a reincarnation of the Rendell administration, not only with respect to putting all the same aristocrat-funded PennFuture employees back in power, but also in throwing money at school districts who sold their souls to public employee unions and wasted so much money they had at their fingertips. Ed Rendell did the same thing when he threw stimulus money at them instead of funding infrastructure. Now Tom Tax and Spend wants to do more of it, proving he’s a Rendell retread. But, Fast Eddie Rendell knew enough not to trash the one industry helping him get through a recession winter. Our current governor, the Rendell retread doesn’t get it.

Tom Tax and Spend also demonstrates an Obama-like incompetence when it comes to citing stats, frequently relying upon the “Pennsylvania ranks 45th in education spending” distortion. Here’s the source and actual language relating to that claim:

Pennsylvania’s school districts continue to be highly dependent on the local wealth of their communities to support students’ academic achievement due to insufficient state funding.  Almost every state pays a larger percentage of overall public education costs than Pennsylvania does.  On average, other states contribute 45 percent of total education funding, but Pennsylvania contributes only 36 percent.  This low state share means that Pennsylvania’s local school districts must pay 55 percent of all public education costs, compared to the national average of 44 percent.  As a result, Pennsylvania’s state share of PK-12 education funding ranks 45th in the nation.

Note the source doesn’t say Pennsylvanians spent less on education, only that the Commonwealth itself picked up less of the tab. There’s no free lunch, of course, and taxpayers pick it all up, every bit of it. Tom Tax and Spend wants to shift the burden from rich school districts in Chester County with a history of financial corruption to consumers, landowners, companies hiring Pennsylvanians and counties with natural resources to develop and little else. His stat, moreover, is meaningless because Pennsylvania has its own unique school funding mechanisms, many of which other states do not have. The Commonwealth’s system, in fact, allowed it to spend 19% more than the national average per pupil on education in 2011, up from 18% in 2010.

Not only that, but Pennsylvania’s spending per pupil ranked 10th in the nation, as this report and table from the Commonwealth Foundation demonstrates.

That’s a lot different than 45th, isn’t it? And, if anyone thinks the kids are going to get more money or that school districts are going to lower taxes and address the public employee pension crisis rather than kick the can down the road with the money, I have a gas lease in Chester County I want to sell them. We don’t hear Pennsylvania is ranked 10th in education spending per pupil stat from Tom Tax and Spend or very many reporters covering him. Instead, he wants us to believe we’re cheating the kids, which we most definitely are not. He’s demagoguing the issue to the hilt and hasn’t the slickness of Fast Eddie, who could revert to common sense and honesty as necessary to pull off the con. He’s a Rendell retread without the winter studs necessary to get a grip.

3 thoughts on “Tom Tax and Spend: A Rendell Retread without the Studs”