John Denver’s line about West Virginia’s mountains rings true to anyone who has ventured along the up and down highways that stretch through those beautiful mountains. It’s anything but heaven if you want to start a new business, though, and despite having some tremendous resources that are spurring new oil and gas development with great success for some communities, it has a crippling severance tax that is smothering what could be an economic revolution for the state.

Some friends here in Pennsylvania recently shared a nice graphic with me that puts it all in perspective and demonstrates precisely why Pennsylvania would lose big with a severance tax like West Virginia’s. The idea may be popular among those believing in free lunches, high taxes and government spending but, to those who have even the slightest grasp of economics, it is idiocy. Here’s the chart that proves it:

The rig counts come from Baker Hughes and all the other data comes from official Pennsylvania and West Virginia state records. Pennsylvania, which has the burden of the second highest corporate tax in the nation (twice as high as West Virginia’s), but relies upon a very well designed impact fee rather than a severance tax with respect to oil and gas development, is absolutely crushing West Virginia in the amount of drilling activity, taxes and fees collected, job creation and production.

Pennsylvania has, at least, found the right balance in regard to oil and gas – “almost heaven” economically, although Tom Wolf would have folks believe our state doesn’t collect anything from gas companies (ought to be worth at least four Pinnochios on Washington Post scale but don’t hold your breath).

Additionally, while the state’s average annual pay increased by $5,158 or 11.9%, to $48,397 in 2012, wages in Pennsylvania’s oil and natural gas industry rose by $22,104 or 36.3%, to $82,974 in 2012. That’s simply astounding and this second chart, developed from US Bureau of Labor Statistics data that doesn’t even include Bradford and Lycoming Counties (because they started at zero oil and gas employment), illustrates: 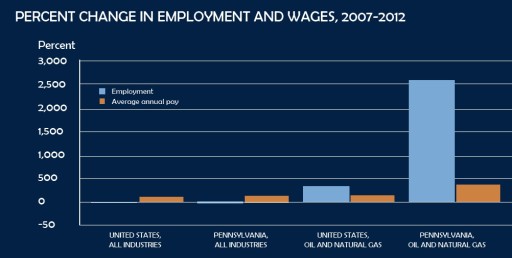 It doesn’t get much simpler than this. Pennsylvania’s approach to oil and gas development has been to use an impact fee designed to direct the money gathered from the industry toward those communities and needs it affects, rather than feed the voracious tax and spend appetites of politicians who would like to waste it appeasing special interests.

This approach has allowed the Commonwealth to temper the negative effects of its outrageously high corporate income tax and to boom as a result. It’s the road less travelled, to be sure, but it has made all the difference. West Virginia chose the other road taken by most and has lost much of what it might have gained, and what it so very much needs.

10 thoughts on “West Virginia Almost Heaven? Close Maybe, But Not Quite!”