The history of the New Brunswick anti-shale campaign is revealing as to the tactics of the opposition and raises serious questions about prospects for the province’s future.

The Canadian province of New Brunswick, nestled along the east coast, is poised to become an energy superpower with reserves of natural gas too vast to ignore. Unfortunately, for the province to step into its role as a natural gas producer, there are many barriers, the most contentious being the political one. Our new Premier-elect, when pushed on the shale issue, shows a total lack of understanding of the shale industry and this will most certainly make or break his political career, and the province’s well-being.

Oil and Gas Aren’t New to New Brunswick, But the Game Has Changed

We must undertake an examination of the reasons why today’s politicians are so quick to dismiss an economic game changer that is done safely and legally in other jurisdictions. New Brunswick is hardly a virgin when it comes to oil and gas. The first oil well was drilled in 1859. Both oil and natural gas were produced at Stoney Creek between 1909 and 1991, with oil production restarted in 2007. There are 322 oil and natural gas wells drilled and over 3,400 kms of seismic testing data has been collected.

The province can easily tap into US energy markets via the Maritimes and Northeast Pipeline. Our natural gas is premium sweet with trace CO2 content found in the thickest natural gas reservoir in North America. This makes our gas different to extract, which has already stimulated new research at our universities. Companies are highly competitive in seeking new methods and willing to invest in them. Since 1990, some 40 oil and 40 natural gas wells have been drilled with another 49 wells hydraulically fractured and 9 wells completed.

Corridor Resources, in Penobsquis, has 30 wells in the McCully Gas Field sending 15 million cubic feet per day to their gas plant. This gas supplies the nearby potash mine. Proximity to a cheaper source of fuel is a huge selling point for Potash Corp to maintain operations in the area, benefitting the local economy.

This announcement from Corridor was something the then new, incoming Progressive Conservative government couldn’t ignore; what responsible government could? With the province mired in debt it needed a new source of revenue that would bring royalties into the coffer along with all the benefits that come with people working and companies investing in the province. New Brunswick was already suffering from the bleed of young skilled workers leaving for the west.

Many people in New Brunswick take credit for the overturn of the government in September 2010, particularly protesters. News that the Shawn Graham Liberal government was negotiating the sale of NB Power to Hydro Quebec gave rise to a huge protest movement in the province. In the meantime, HQ was hoping to unload the Pt. Lepreau nuclear plant onto Bruce Power for approximately $5 billion which would have covered the cost of their purchase of New Brunswick’s remaining assets and customers.

It was the first protest to make extensive use of social media. Facebook groups sprung up to protest the sale, with one group topping 20,000 users. The names of some “anti-sale” protesters became well-known. Although, at times, there were cracks in their protest movement, the protesters won in the long run, seeing the Liberals defeated, their scheme shelved. The largest organized group dissolved.

The Launch of the New Brunswick Anti-Shale Campaign

Other groups evolved into “anti-shale” groups, such as the “NB is Not For Sale” Facebook group. One of the names associated with the New Brunswick power protests was Bethany Thorne-Dykstra. She quickly shifted her energy to protesting “fracking.” Emboldened by a sense of empowerment, she formed a new group called “Citizens for Responsible Resource Development” shortly after the 2010 election. (Our group Resource Wise New Brunswick has no ties at all to this group.)

The Thorne-Dykstra group organized a rally at the provincial legislature November 23, 2010 with about 50 people in attendance with their red “Say no to shale gas” signs. This new citizens’ group was supported by the province’s largest environmental group, the Conservation Council of New Brunswick (CCNB). The Executive Director of the CCNB at the time was David Coon, now NB Green Party leader and newly-elected Member of the Legislative Assembly (MLA). The CCNB and Citizens for Responsible Resource Development called for a moratorium on shale gas exploration and development until “appropriate safeguards are adopted to protect the environment, communities, and the public interest.”

The then new Natural Resources Minister, Bruce Northrup, promised to work with the groups to ensure their concerns were addressed. In the meantime, the protest waters in New Brunswick were becoming darker and murkier. People who protested together against the sale of NB Power were now on opposing sides of the shale debate. Some have expressed surprise that people who protested against selling the public utility were now opposed to industry and a cheap, reliable source of energy to fuel NB Power’s plants. Shale gas would certainly be cleaner than burning oil and coal.

Other groups were suddenly taking up the anti-shale cause. There were newly formed groups and older community groups that used to hold bake sales and host dances. The first rally in 2010 was endorsed and promoted by the Sierra Club. The Council of Canadians was becoming more prominent. Again the protesters took to social media with many groups springing up to “ban fracking.”

Throughout the winter and spring of 2010-2011 Thorne-Dykstra and other group leaders carried on protests and promoting a moratorium on everything shale gas. The movement that has been described by its own leaders as “like herding cats” went off in several directions.

Citizens for Responsible Resource Development, with Thorne-Dykstra at the helm, continued her group’s two-pronged attack on shale: that the industry shouldn’t proceed too quickly without proper, protective regulations in place and that royalties needed to be used to the benefit of communities. However, behind the scenes there was far more organizing going on than was being disclosed. This became apparent in July, 2011.

The New Brunswick government had unveiled a series of new regulatory changes in June of that year after public consultations. At a July 6 press conference with Thorne-Dykstra and Natural Resources Minister Bruce Northrup, she announced, in light of the new changes to the regulatory structure, that her group was dropping it’s call for a moratorium on shale gas. 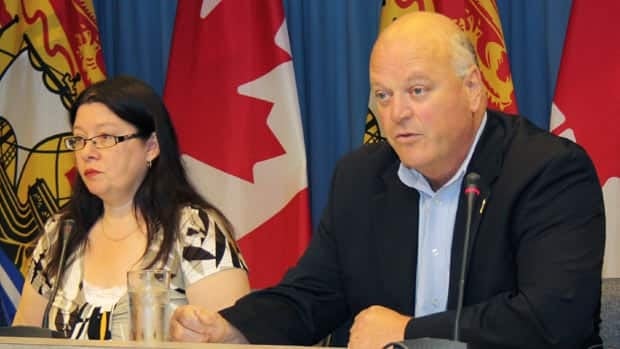 Bethany Thorne-Dykstra was at a news conference with Natural Resources Minister Bruce Northrup on Wednesday to say her group no longer supports a moratorium on hydro-fracking. (Courtesy of the Government of New Brunswick)

Referring back to the purpose of forming the citizens’ group (the CCNB and Citizens for Responsible Resource Development called for a moratorium on shale gas exploration and development until “appropriate safeguards are adopted to protect the environment, communities, and the public interest”) it was determined by Thorne-Dykstra’s group that this had been achieved. A steering committee, in fact, was be formed to come up with an action plan for the industry’s future development.

During this same press conference Thorne-Dykstra highlighted the difference between her group and the CCNB, who originally supported the Citizens for Responsible Resource Development. She criticized the CCNB, under the leadership of Executive Director David Coon and Fresh Water Coordinator Stephanie Merrill, of using US-style fear mongering tactics. The CCNB had, for example, been holding screenings of Josh Fox’s documentary Gasland all around New Brunswick.

Thorne-Dykstra used the press conference to point out, “There are many special interest and environmental groups in the province who have sensationalized this issue and only work on the emotional side.” It didn’t take long for these groups to strike back at Thorne-Dykstra, denying her group and calling her things like “traitor” and “sell-out.” Despite many articles about her group Citizens for Responsible Resource Development, including those from CBC and this one from independent media outlet NB Media Coop, these other groups even denied any knowledge of her group. This was despite the following statement the NB Media article (emphasis added):

New Brunswick’s largest environmental group, CCNB, supports the call made by the Citizens for Responsible Resource Development to have the provincial government place a moratorium on shale gas exploration and development until appropriate safeguards are adopted to protect the environment, communities, and the public interest.

Following the press conference, David Coon denied the CCNB was “fear mongering” by showing the one-sided Josh Fox film Gasland and said he was not convinced hydraulic fracturing could be done safely. Other groups claimed they had not even heard of the Citizens for Responsible Resource Development, even though it was the first group to organize a protest against shale gas in the province. Carl Wolpin, a member of Hampton Water First, said he had never heard of Thorne-Dykstra’s group until the press conference. He also said it was possible there would be a coalition formed between groups, continuing to call for a provincial moratorium on shale gas, “to speak for the anti-natural gas development movement.”

Such is the credibility and truthfulness of the current anti-shale movement in New Brunswick, it has little of either.

Part II of The Battle for New Brunswick and Its Future tomorrow!