Tom Wolf, Pennsylvania’s new governor, wants to reward the Delaware River Basin Commission (DRBC) for its nonfeasance by increasing its funding. Stop him!

On Tuesday, PA Gov. Tom Wolf delivered the most expensive budget in PA history, a budget that plans to steal money from landowners and drillers and give it away to Big Education ( Big Education’s public employee pension funds to be more precise). Not only does Tom Wolf want to “restore funding” for Big Education, he also, disappointingly, intends to restore funding for the Delaware River Basin Commission (DRBC) so it can continue its anti-drilling ways.

Wolf wants to lavish the DRBC with 3/4 of a million dollars, which is a 73% increase over last year’s funding under then Gov. Tom Corbett. The problem with funding the DRBC is that PA taxpayers are footing most of the bill because other member states, including NY, NJ and the federal government, are short-changing the DRBC–not paying what they owe. Delaware is the lone member that pays what it’s supposed to (which is much less than PA). So PA taxpayers are in the unenviable position of propping up an organization that acts against their interests. 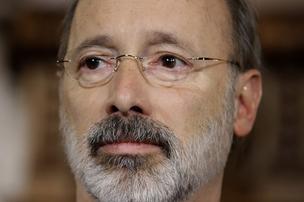 We’ve written plenty about the DRBC and its former anti-drilling director Carol Collier (see our list of DRBC stories here). Because the DRBC serves the interests of aristocrats in New York City and Philadelphia who desire to own land in rural locations like the Catskills and Poconos, the organization has consistently opposed shale drilling in the Delaware River basin–which prevents drilling in places like Wayne County, PA which would, no doubt, be producing natural gas right now–if it only could.

It was hoped that a new director, installed last spring, would change the direction of the agency (see DRBC Selects Steve Tambini as New Leader, Enviro Groups Unsure). It’s been a year and there’s been no detectable change, which is a major disappointment to PA’s pro-drillers living in Wayne County. 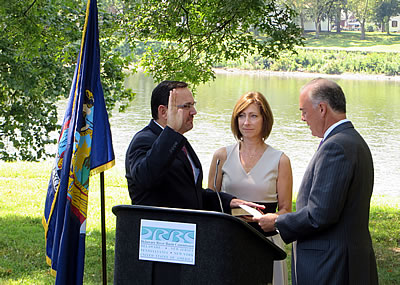 Previous PA Gov. Tom Corbett (Republican) got sick and tired of being the only state to provide any kind of meaningful support to the obstructionist DRBC, so he axed PA’s “contributions” to the agency (see Good Move: PA Budget Cuts DRBC Contribution in Half). Anti-drillers pitched a fit (when don’t they?), but Corbett held firm.

Now, newly-elected Democrat Gov. Tom Wolf wants to restore the DRBC’s supply of champagne, IF he can sneak it past the Republican-controlled legislature:

In a reverse from the previous administration’s budget, Governor Tom Wolf’s proposed plan would restore much of Pennsylvania’s share of funding to the Delaware River Basin Commission. Former governor Tom Corbett had slashed in half Pennsylvania’s contribution to the multi-state commission in last year’s budget. Corbett cut the DRBC’s funding while maintaining funds to the Susquehanna River Basin Commission. Some speculated that the move was retribution for the DRBC’s continued moratorium on natural gas drilling in Pike and Wayne counties, which lie within the commission’s jurisdiction. Corbett was unsuccessful in convincing other members of the DRBC to lift the moratorium on gas drilling in the basin.

“We welcomed the news because it means we’re heading in the right direction from what we experienced the previous year,” DRBC spokesman Clarke Rupert told StateImpact. “But that’s still subject to the legislature.”*

The five members of the DRBC–PA, NJ, NY, DE and the U.S. Army Corps of Engineers–are supposed to fund it. Most of them have been deadbeats:

The five signatories made a tacit agreement in 1988 to contribute their “fair share.” Pennsylvania and New Jersey agreed to contribute 25 percent of the budget. Neither New Jersey or Pennsylvania’s state budget would fully fund its share, which is $893,000 a piece. New York has also recently fallen short of its contribution, which is 17.5 percent. Delaware consistently pays 12.5 percent, while the federal government agreed to a 20 percent share.

Why should PA taxpayers foot the bill when no one else is?

Now enter with us, if you dare, into the mind of a twisted, liberal anti-driller. In the minds of such people, if PA increases its contributions, that will encourage everyone else to do so too. Only in the mind of a lib do you get such twisted logic.

“In recent years Pennsylvania has been outright hostile toward the DRBC,” said van Rossum. “And that’s not just within the Corbett administration. In the Rendell administration we saw a level of opposition to efforts that would have strengthened protection for the Delaware River. [Wolf’s budget] is really a good sign for other members of the compact. And hopefully it will inspire the other states, and the federal government to restore their commitment to the DRBC.”

Editor’s Note: The State Impact article that Jim quotes illustrates the corrupt nature of the relationship between government, special interests and media today. Going to Maya van Rossum for an opinion on DRBC funding (she sues the agency and disrupts its meetings to get her way) is like asking a mob boss for his opinion on Jimmy Hoffa. The relationship between the Delaware Riverkeeper and the DRBC has been one of absolute corruption, where the two allies alternate between pretending to be allies and enemies, while both do the bidding of the William Penn Foundation, which has placed its lackeys at the very head of Pennsylvania government.

Thus, what we have is a corrupt gang of special interests integrally involved with all three sides of this crooked triangle: from the advocates, to the agency, to the media outlet perpetuating the false narrative, hoping to reward the agency for what is, at best, incompetence. It’s much more than a disappointment; it’s an outrage and no one, but no one, in a position of influence is speaking for the needs of upper basin residents. The outrage is made worse by the self-serving statement of DRBC spokesman Clarke Rupert who says he welcomes the news “because it means we’re heading in the right direction from what we experienced the previous year.”

Right direction? No, the right direction would be to zero out funding for this irresponsible corrupt agency until it gets its act together. Feel the same way? Then, e-mail PA State Senators Patrick Browne and John Blake (majority and minority chairs of the Appropriation Committee, respectively) as well as Representatives William Adolph and Joseph Markosek, who hold the same positions in the Pennsylvania House. Simply tell them “Not one DRBC dime until gas drilling regs are approved.”  While you’re at it, also copy Senator Lisa Baker and Representatives Sandra Major and Mike Peifer, who speak for Wayne County in the legislature.  Here’s my message to them:

2 thoughts on “Not One DRBC Dime Until Drilling Regs Are Approved!”