Methane found in drinking water in northeastern Pennsylvania is unrelated to nearby fracking wells, a new study by Syracuse University found after analyzing more than 11,300 water samples from the region.

You can’t tell us there isn’t political bias in the world of so-called hard science and whether or not important research gets reported. Duke University published a shoddy “study” in 2011 that attempted to show a link between the presence of 68 shale wells and high levels of methane in nearby groundwater supplies (see MDN In-depth: Duke University Study Links Marcellus Shale Gas Drilling with Methane Contamination of Water Wells). That study got all sorts of coverage in the media.

After their sloppy work was exposed by a number of scientists, the same group doubled down to try and salvage what little credibility they had left by publishing a second study in 2013 concluding the same thing (see Duke Study #2: Drilling Causes Methane Migration in Water Wells?). More media fanfare of “See, it really is true!” But, it wasn’t.

There were several fatal flaws in Duke’s research: they cherry picked the wells they used, they used a small data set (68 water wells in the first study, 141 in the second), and they had no baseline measurements – no “before and after” measurements to know if the methane was already present (as it so often is in Northeastern Pennsylvania). 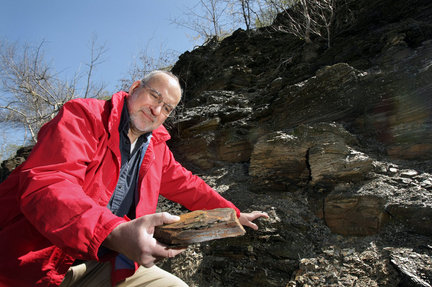 Syracuse University hydrology professor Donald Siegel examines a sample of Marcellus Shale at an outcropping of this rock on Rt. 174 in Marcellus. David Lassman / The Post-Standard

So what if some real researchers were to come along and use a data set hundreds of times larger (data on 11,000+ northeast PA water wells) and what if that data has baseline information–the before picture. Seems like that would settle it, right? That would address the weaknesses and shortfalls of the previous, shoddy research. Such a study was just published in the peer reviewed journal Environmental Science & Technology.

The new study, based on a huge data set, finds “no statistically significant relationship between dissolved methane concentrations in groundwater from domestic water wells and proximity to pre-existing oil or gas wells.” For that reason, literally no mainstream media outlet is covering the story. It’s a mainstream media blackout – for fear the truth will escape and enter the public consciousness.

The research team publishing the new study was led by Donald Siegel of Syracuse University. You might think Syracuse University themselves, or the local newspaper the Syracuse Post-Standard would at least contain a mention of this important, frankly earth-shattering news. Nope. Nothing. Nada. Zippo. Crickets.

This is how news is manipulated. If the public doesn’t hear “news” from so-called mainstream sources, it never happened/doesn’t exist in their (feeble) minds. What have we come to as a country? But we digress.

The single mention we can find in any kind of “mainstream” media source comes from Science magazine’s website:

Fracking doesn’t appear to be allowing methane to seriously contaminate drinking water in Pennsylvania, a new study finds—contrary to some earlier, much publicized research that suggested a stronger link. But the lead authors of the two bodies of research are sparring over the validity of the new results.

The new study of 11,309 drinking water wells in northeastern Pennsylvania concludes that background levels of methane in the water are unrelated to the location of hundreds of oil and gas wells that tap hydraulically fractured, or fracked, rock formations. The finding suggests that fracking operations are not significantly contributing to the leakage of methane from deep rock formations, where oil and gas are extracted, up to the shallower aquifers where well water is drawn.

The result also calls into question prominent studies in 2011 and 2013 that did find a correlation in a nearby part of Pennsylvania. There, wells closer to fracking sites had higher levels of methane. Those studies, however, were based on just 60 and 141 domestic well samples, respectively.

“I would argue that [more than] 10,000 data points really tell a better story,” says hydrogeologist Donald Siegel of Syracuse University in New York, whose team published the new study online this month in Environmental Science & Technology. Chesapeake Energy Corp., which has large oil and gas stakes in Pennsylvania, supplied the researchers with the database, the largest of its kind, and also funded the work.

Click here to finish reading the Science article, which seems pretty fair and balanced to us (except it quotes Tony “the clown” Ingraffea, a so-called professor at Cornell University whose claim to fame is his position that burning methane is dirtier than burning coal). 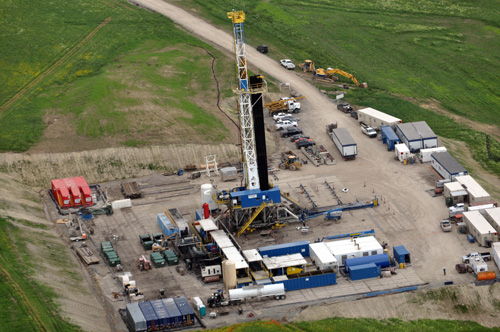 We don’t have a full copy of the new study–you need to buy it or have access to a university library with a subscription. But we do have the abstract/summary:

Recent studies in northeastern Pennsylvania report higher concentrations of dissolved methane in domestic water wells associated with proximity to nearby gas-producing wells [Osborn et al. Proc. Natl. Acad. Sci. U. S. A. 2011, 108, 8172] and [Jackson et al. Proc. Natl. Acad. Sci. U. S. A., 2013, 110, 11250]. We test this possible association by using Chesapeake Energy’s baseline data set of over 11,300 dissolved methane analyses from domestic water wells, densely arrayed in Bradford and nearby counties (Pennsylvania), and near 661 pre-existing oil and gas wells. The majority of these, 92%, were unconventional wells, drilled with horizontal legs and hydraulically fractured. Our data set is hundreds of times larger than data sets used in prior studies. In contrast to prior findings, we found no statistically significant relationship between dissolved methane concentrations in groundwater from domestic water wells and proximity to pre-existing oil or gas wells. Previous analyses used small sample sets compared to the population of domestic wells available, which may explain the difference in prior findings compared to ours.

Also, be sure to read this excellent summary of the new study by MDN friend Nicole Jacobs at Energy in Depth: