Severance taxes and other gimmicks aren’t going to correct a disastrous case of bi-partisan public pension fraud by Pennsylvania’s politicians in 2001.

We’ve been hard on Tom Wolf here for his dumb severance tax idea, his pompous attitude and appalling appointments as well as his betrayal of landowners where I live in Wayne County. Notwithstanding all that, he didn’t necessarily create the problem he’s using as an excuse for his severance tax and several other stupendously stupid proposals.

That responsibility falls on a bi-partisan collection of elected officials from 2001 who committed what can only be described as public pension fraud – they gave away the store when they thought no one was looking and now we’re all paying the very steep price with some being asked to pay more than others, of course. Hence, Wolf’s severance tax proposal, based on the free lunch theory.

Pennsylvania’s governor at the time its current crisis was born was Tom Ridge, the same guy who gave us Carol Collier as DRBC Executive Director, among other problems. The Pennsylvania Senate was also in Republican hands at that time, led by Lebanon County Senator David J. Brightbill who was later thrown out of office by his own party in 2006 for helping to engineer legislative pay raises. The Pennsylvania General Assembly was led by Matthew J. Ryan, still another Republican, who had been in office since 1962. I mention these individuals by name because they precipitated the public pension fraud then that has produced the severance tax foolishness now. 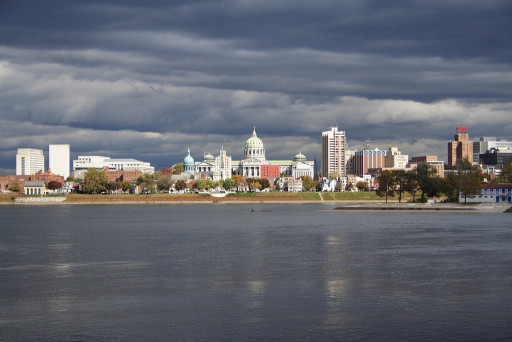 It all began with Act 9 of 2001, which these folks enacted into law while Pennsylvania was doing well economically. It’s two public employee retirement systems (the Public School Employee’s Retirement System or PERS and the State Employees Retirement System or SERS) then enjoyed surpluses. The Commonwealth, at the time Act 9 was passed, enjoyed the third best funded public employee retirement system in the nation at 115% funding of its retirement obligations, according to a superb analysis by the CATO Institute performed in 2012.

It only took eight years for that No. 3 ranking to plummet to No. 46, thanks to Ridge and company’s initiative. They wanted to spend the surpluses on giveaways to public employees to provide cover for bennies they awarding themselves at the same time. They, in fact, increased their own pension benefits by 50% according to another analysis, which listed these impacts from Act 9:

Angry yet? Well, consider these facts:

The old politicians left us a tremendous mess as a consequence of their free lunch gimmicks and the new ones are doing the same with a ludicrous severance tax proposal based on several falsehoods and outrageous ideas. Tom Wolf, aided by a mostly compliant media, falsely suggests Pennsylvania is the only state not to impose a tax on natural gas (it collects an impact fee that is equivalent to a tax and already imposes some of the highest corporate taxes in the land). He then proposes a severance tax in the middle of a price slump already sidelining rigs, saying it’s both modest and capable of producing a billion dollars of year in revenue, while slyly incorporating a floor price that would make the actual rate far above any other state and ensure almost no collections.

It’s a recipe for disaster and is obviously going nowhere, yet Wolf continues to advance it. Why? Because his political funders, Tom Steyer (photo below) and the teacher unions, demand it. The latter gave him $3.4 million and put $10.5 million into Pennsylvania campaigns as a whole in 2014 and Tom Corbett didn’t even call him on it in one of the worst run campaigns ever.  Steyer says he gave $1.4 million and I don’t recall any ads calling out that either. 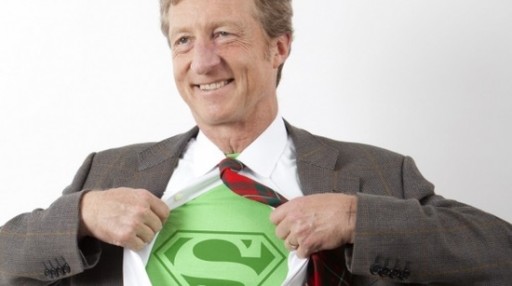 Regardless of Corbett’s lack of ability to go for the jugular in a year when he should have won, Tom Wolf won and clearly is indebted to people who don’t like gas but love free lunches. These are the same people who fund the Keystone Research Center and the Multi-State Shale Research Collaborative, about which we wrote here. They will gladly take the Commonwealth over the cliff for the sake of their free lunch and disseminate falsehoods faster than a speeding bullet to make it happen.

The rest of us don’t have to let it happen, however. We can stand up to these bullies, even if Tom Wolf cannot. We can and must tell the stories of the folks who will pay for this stupid severance tax with their jobs and futures. They’re the people who have finally been given an economic lift by shale gas and now face the prospect it will be killed off by greedy public employee unions eager to foist the costs of their swollen benefits onto the backs of others.

Meanwhile, the Pew Charitable Trusts tells us Pennsylvania public employees enjoyed an average salary of $53,070 in 2012, well above their neighbors in Delaware ($51,773), Maryland ($50,417) and West Virginia ($40,487). And, the private workers paying those salaries? Well, they earned only $48,140 in Pennsylvania, some $4,930 or 9.3% less than the Commonwealth’s public employees. Guess who Tom Wolf wants to rescue? He hopes to do so by falsely claiming he wants to rescue education, when our Pennsylvania taxpayers already spend 27.5% more per pupil on instruction than the average across the US. (Pennsylvania also spends more than Delaware and West Virginia and just slightly less than Maryland, as well as 31.1% more than Ohio.)

Will Wolf succeed in this ruse? It’s not likely and, sooner or later, the bill for the free lunch will come due. The only question is how much more damage we’ll do to ourselves in the interim. Loose talk about dumb ideas is already hurting. If Tom Wolf really wants to lead and show he’s more than a Rendell retread, he’ll have to move from being Tom “Tax and Spend” Wolf to someone more like Ronald Reagan when he took on the Professional Air Traffic Controllers Organization that had supported his campaign. Something tells me that’s not happening under Tom Wolf. Pennsylvania’s public pension fraud continues.