UPDATE April 3, 2014: A recent article in the Scranton Times regarding a study by the Multi-State Shale Research Collaborative is old news, recycled to serve as campaign propaganda against PA Gov. Tom Corbett. Here’s what we said back in December.

The Multi-State Shale Research Collaborative, which just came out with a report trashing what we see with our own eyes, economic prosperity from shale gas, is a Heinz Endowments and Park Foundation hit piece.

A group called the Multi-State Shale Research Collaborative came out with a report entitled Exaggerating the Employment Impacts of Shale Drilling: How and Why which came off like a hit piece on Tom Corbett.  That’s hardly a surprise given what the group is; a collaboration of leftist political entities funded by two of the biggest enemies of shale gas development, the Heinz Endowments and the Park Foundation. The report was essentially another piece of junk science along the same lines as the Cornell report the two foundations funded a couple of years ago. Yet, it predictably got media attention courtesy of editors and reporters who somehow never think it’s important to identify the accusers or their agenda.  An editorial in the Wilkes-Barre Times-Leader offers a case in point by quoting the report uncritically.

The Multi-State Shale Research Collaborative describes itself as follows:

The first hint something might not be quite right about this group is their excessive use of the word “nonpartisan,” which is how they describe themselves and each of the six entities that compose the collaborative. You don’t have to be a fan of Shakespeare to think this gray lady protests too much.  The Collaborative, of course, is totally partisan, as are the individual members.  They promote the Heinz/Park agenda and that of certain unions, particularly the SEIU and teachers unions, two groups in Pennsylvania who have a hate on for Governor Tom Corbett.

The Multi-State Shale Research Collaborative report is primarily about Pennsylvania and includes this highly unprofessional attack on the Governor, a comment apparently inserted at the last moment, that would never have made it into a legitimate research study:

Unfortunately, a growing number of shale industry champions have used the total number of jobs in so-called shale ancillary industries in highly misleading ways. For example…

On November 6, 2013, Pennsylvania Governor Corbett told a crowd in Pittsburgh: “The energy industry in Pennsylvania is now supporting the livelihoods of over 200,000 people and their families who work in good-paying middle class jobs.” Commonwealth of Pennsylvania Energy Executive Patrick Henderson made clear in an online comment that the Pennsylvania Department of Labor and Industry core plus ancillary employment figures were the basis for the Governor’s claim.

This comment does, nonetheless, make it explicitly clear what the objective of the Multi-State Shale Research Collaborative report is; to denigrate the Governor and downplay shale development at the behest of its anti-shale funders.  It has no other purpose, as a quick review of its contents also reveals.

In the region as a whole, shale-related employment grew by almost 33,000 jobs as 8,750 wells were drilled. An estimated 3.7 jobs were created for every well drilled in the region. This figure stands in sharp contrast to the claims in industry-financed studies, which included estimates as high as 31 jobs created per well drilled.

Even if we accept their 3.7 jobs per well number that’s a measure of direct employment in shale development and related support activities, while the 31 jobs referenced was clearly identified as a combination of direct and indirect jobs.  The report, therefore, deliberately compares apples to oranges to suggest apples don’t measure up.  That is a con job.

The report also gauges shale gas related employment by subtracting what it says was “employment in conventional oil and gas extraction and support activities prior to significant fracking” as if the latter had gone forever without change but never bothers to mention the ratio of conventional to non-conventional gas well permits has completely flip-flopped since 2005, meaning that shale gas development is the natural gas industry today in Pennsylvania.  One cannot pretend things are as they were or would have been absent shale gas development.  This is complete intellectual dishonesty.

Problems such as this are rife throughout the report.  It mentions the steel industry but twice, for example, and then only to dismiss it, despite U.S. Steel’s comeback as a result of Marcellus Shale and the fact inexpensive natural gas is making it a lot less expensive to make steel and petrochemicals (also dismissed in the report).  It also pooh-poohs multiplier estimates used by others but fails to offer any its own, which is curious, given the fact these can be purchased from the Bureau of Labor Statistics, the same source used for many of the numbers cited in the report.

It downplays shale by referring to declining rig counts, taking no account of increasing production generating opportunities for employment in building pipelines. It presents a first quarter 2013 decline compared to 2012 as if it were the end of the world when it actually reflected that 2012 was a banner year for jobs. And, it suggests shale development might have driven out tourism by taking up hotel rooms, ignoring the tourism gains in shale counties, not to mention the new hotel construction (tiny Tunkhannock in Wyoming County has two new hotels, for example).

The Multi-State Shale Research Collaborative report, in other words, is a very shoddy one and that’s no surprise, given its funders. Don Roessler did a much better job with his analysis, but, then, he didn’t have a funder to please. A look at the Keystone Research Center’s funding (it’s clearly the main driver of this report) indicates the SEIU and PSEA are at the center of this effort to embarrass Governor Corbett, but the Heinz Endowments and Park Foundation are the source of the money for it (there are also two smaller foundations involved, including the Stoneman Family Foundation, which funds numerous leftist outfits). 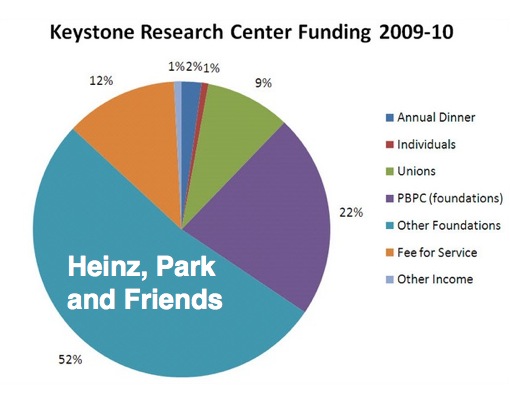 So, what we have is another example of the Heinz and Park dragon at work, breathing smoke and fire in an attempt to burn down something, an industry that is finally reviving places like Washington County and the Northern Tier. They are exploiting the enmity public employee unions have for Corbett by funding them to produce a report that attacks him and strikes a blow against shale gas as part of the deal.  It’s par for the course, but you’d think media folks would at least mention the conflicts of interest and the political agenda behind this report.  But, that’d require a miracle.  We’re lucky to have the Marcellus Miracle and expecting another is just too much to ask, it appears.