It’s election season and some unprincipled politicians of both political stripes are suggesting Pennsylvania ought to have a severance tax like the one Texas has. They want to use it to pay for education, they say. If you believe that, let me show you this piece of land I own. It has gorgeous rock outcroppings just perfect to perch a house on top and you’ll be able to reach it by a long winding road like no other. It’s just what you need – trust me.

That’s roughly the quality of the arguments we hear from some of the folks seeking elected office and promising us all free lunches. Unfortunately, there’s never a free lunch, however much we might wish it to be so.

A Severance Tax Is a Raid on OPM

Wading into the subject of tax comparisons between states is likely to lead into deep waters where most of us quickly find ourselves in over our heads. The politicians count on that to exploit our lack of understanding and sell us a bill of goods about, well, all the good they could do for us if we just kill a few of those golden geese foraging in the corn fields. They promise, too, nothing would ever make the geese go away; the corn is here after all and after making that long flight north and finally landing here, their surely not going to head to the skies again. Trust us, they say. We’ll just kill a couple of those geese and we’ll be able to save the world. 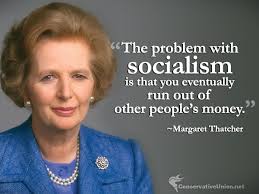 Yes, aren’t our politicians just wonderful at saving the world with other people’s money (otherwise known as “OPM”)? That’s what a severance tax is, of course. The state does little or nothing to create, sustain or add value to the resources being taxed but it wants a piece of the action from others who do so, on the theory there are negative impacts to be compensated or great rewards to be had at no cost.

It’s not clear what the negative impacts of natural gas development are in comparison to any other industry that pays its way with gas, income, property and taxes, while upgrading roads at its own expense and providing jobs and economic opportunity. Still, Pennsylvania’s impact fee, which raises $200 million per year is at least targeted at areas of the Commonwealth where such impacts theoretically exist.

A severance tax, by contrast, doesn’t even make a pretense of addressing negative impacts. It is a pure money grab.  It’s gimme, gimme and gimme some more so I can look like a hero passing out your money.  But, whose money is it? Well, we know none of its going to come from gas companies, accept in the very short-term as they adjust financial strategies to compete in the marketplace. You don’t sell gas at the price you ask but, rather, at the price the global market dictates.

Therefore, the gas company will do one of two things to stay in the game if it has to pony up more money in the way of severance taxes  for the gas it has to sell; 1) pass the cost onto landowners in the way of deductions from royalties, or 2) move rigs to areas with lower taxes. If it’s a low cost operator, it may have a third choice, passing the cost onto its consumers. One thing is for sure, though; it will not simply absorb the higher costs. No company can do that and stay in business for long. That’s a reality most of us would like to deny, yet few of us take pay cuts without looking for other jobs.

Politicians prosper, though, by their superior understanding of human nature. They realize negative advertising works, no matter how much we say we detest it. They also know envy sells, way better than sex. They grasp how saying something along the lines of “you deserve what they’ve got,” and doing so with conviction, is all you need to grab a chunk of votes. So, we have multiple politicos talking about imposing Texas size severance taxes on Pennsylvania gas companies.  The numbers are all over the place with one candidate for governor even talking about a 10% tax on drilling companies.  Talk about killing the golden geese!

Severance Tax Discussion Leaves Something Out

There are never any details provided, of course, because that’s where the devil resides, as they say. Groups like the Keystone Trails Association, who would love to get their hands on some OPM to criss-cross the state with trails for yuppies and those of us who like to hike occasionally. They say “Pennsylvania needs a severance tax similar to Texas’s to pay for the downstream costs associated with gas drilling and the impact on our land and water supplies.” Notice the emphasis on impacts which were compensated before and after the Act 13 Impact Fee with hundreds of millions of dollars spent on road repairs and community improvements in areas of drilling, but what they really want is the OPM to build trails.

Putting aside their motives, are they correct in supposing a Texas style severance tax would work wonders? Well, if you read the Natural Gas Extraction: An Interstate Tax Comparison report by Pennsylvania’s Independent Fiscal Office (IFO), you might think so. It’s a good report as far as it goes, but that’s the problem; it doesn’t go far enough because it fails to analyze the impact of corporate income taxes. 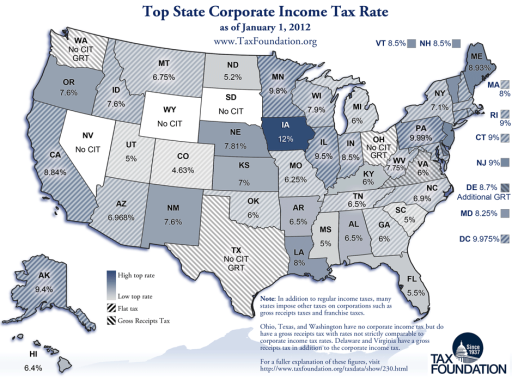 The report suggests, based on a comparison of taxes paid on extraction of natural resources in major oil and gas states, that Texas taxes averaging 4.6% on the value of production. The actual tax rate is 7.5% but various allowances and credits for costs of production reduce the effective rate to an estimated 4.6% according to IFO. This compares to effective tax rates of 0.6-1.8% in Pennsylvania, they say.

Is the correct? Well, it appears to be close but still off by a significant amount. The Texas Oil and Gas Association did a study on the economic impacts of the industry in 2012 and found $1.535 billion in taxes on the production of natural gas in that year as compared to $202.5 million paid in Act 13 Impact Fees that same year. Pennsylvania’s shale gas production subject to the impact fee in 2012 was, according to the Energy Information Administration (EIA), a total of 2.042 trillion cubit feet, which was 28.0% of the Texas natural gas production subject to their severance tax that year.

Pennsylvania’s total impact fees were 13.2% of what Texas collected in severance taxes, so, on the surface, gas companies paid 2.1 times the rate in Texas as in Pennsylvania. That’s not as wide a divergence as IFO suggests but their analysis is prospective, not historical. The historical figures provide a better measure of the net impact of the various incentives in place in Texas, incentives that lower real taxes paid well below what the Texas 7.5% rate suggests.

Is Pennsylvania Giving Really Away the Store on a Severance Tax?

Do gas companies really get away with paying Pennsylvania less than half what they pay in Texas though? No, because the IFO report doesn’t account for corporate income tax differences, which are part of the total cost of doing gas business in Texas. Texas, in fact, has no income tax. Repeat: Texas has no corporate income tax. It does have a gross receipts tax, but it is much smaller and being reduced further. Pennsylvania has a very high corporate income tax of 9.99%. This means we need to combine the corporate taxes with impact fees to get a fair comparison with Texas.

We can get an idea of what these taxes might be by looking at the SEC filings of public gas companies. One company we examined, for example, had operations in both Texas and Pennsylvania in 2012. Some 86% of its production was in Pennsylvania in 2012 and it paid $9.6 million in impact fees that year. It also had net income of $485.5 million on which it had a total income tax obligation of well over $200 million so we know the income figure also approximates taxable income.

Now, multiply $485.5 million by 86% for the amount attributable to Pennsylvania and apply a tax rate of 9.99%. You get $41.7 million and that’s after privately funding rough $5 million of road upgrades annually, which are covered by the Texas severance tax.  Had this company been in Texas it would, at 2.12 times the Pennsylvania rate, have paid $20.3 million in severance taxes. Here is an illustration of how it all stacks up for our example company based on the combination of impact fees/severance taxes and corporate income taxes, depending upon which the state in which they did business: 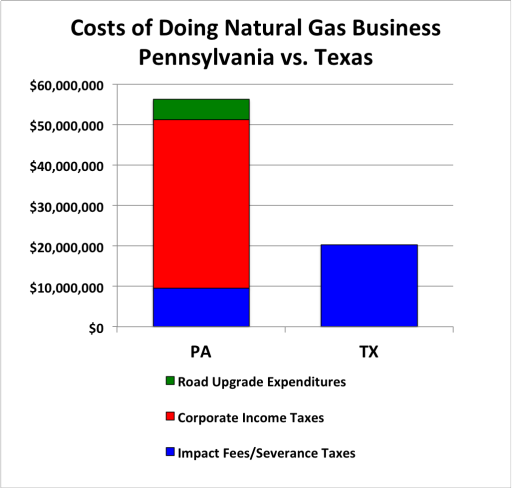 Some of you, no doubt, will say “but you forgot this” or words to that effect. There is never an end to the debate over effective tax rates or their effects, but the main point is not challengeable; it is more expensive for a gas company to do business in Pennsylvania than Texas. Therefore, messing around with a Texas style severance tax is not a good idea. It will only exacerbate the problems attendant to Pennsylvania’s very high corporate income tax rate. Moreover, unless such a tax is placed on top of the existing impact fees, the big losers will be the counties where drilling is now or is likely to take place. Is that what we really want? And, do we really want to take a chance on killing the golden geese we’ve attracted?

The answer should be obvious: don’t mess with Texas.

12 thoughts on “Don’t Mess with a Texas Severance Tax”