Larry Rockefeller became part of Team Cuomo yesterday in another illustration of the bull ring the NRDC gang of fractivists has in Andrew Cuomo’s nose.

If you, like one of our recent commenters, thinks I am “sounding like a paranoid leftist, looking for a cabal under every corporate office tower and foundation” every time I write about the Rockefeller family, you won’t like this post. I have been writing for more than three years now about the role of this family in funding fractivism in pursuit of their very special interests in the Catskills. They are uber-networked, of course, and have a bull ring in Andrew Cuomo’s nose that they yank whenever necessary to ensure he doesn’t do anything that threatens those interests.

They’re looking for a deal ensuring that part of Upstate New York where they do business stays in perpetual pastoral poverty so the land is always available on the cheap for their purposes. Is such a deal, where the interests of middle-class landowners in the Delaware River basin are sacrificed for their sake, in the offing? Could be, based on an YouTube released today.

The video is an endorsement, by Larry Rockefeller, of Andrew Cuomo for re-election as Governor of New York. It’s more of an attack on Rob Astorino, really, but the video is a sign-on by Rockefeller to “Team Cuomo,” of course:

The video isn’t particular effective, as Rockefeller comes across as a goof, but that’s hardly the point. The real significance of the endorsement is that it furthers co-opts Cuomo, a guy already so indebted to the Natural Resources Defense Council (NRDC), where Rockefeller serves as a trustee that he was willing to put not one, but three senior attorneys, including Bobby Kennedy, Jr., on his hydrofracking advisory committee. The ostensible purpose of that committee was to advise Cuomo’s Environmental Conservation Commissioner, Joe Martens, who also just happened to come from the Open Space Institute, which is run by Rockefeller descendant Kim Elliman and the board of which is composed of Larry Rockefeller cronies.

We have explained the multiple connections numerous times, including here, here and here, but let’s focus for now on the role of the man who is at the heart of all of it. Laurance Rockefeller, Jr. is the great-grandson of John D. Rockefeller, the oil baron who created the fortune, working, early on, from an office upstairs in the Transit Building in Oil City, Pennsylvania. Larry, as he likes to be known, is a land developer, who has developed an exclusive retreat-type community for the rich and famous in the area where Delaware, Sullivan and Ulster Counties, New York come together. It is mostly drained by the Beaverkill River, which eventually joins the Delaware.

Rockefeller’s development arm is the Beaverkill Mountain Corporation and it owns, controls and has traded tens of thousands of acres of Catskill land in this vicinity. All the power players connected with the NRDC and its sister entity, the Open Space Institute, reside or have second homes there. Rockefeller was also instrumental in creating the Institute, which controls the Beaverkill Valley Conservancy, with which land is traded by Beaverkill Mountain  Corporation. The OSI, in turn, created the Catskill Mountainkeeper organization as an offshoot and staffed it Ramsay Adams, the son of John Adams who chaired OSI and ran NRDC.

It’s all the same group of Larry Rockefeller cronies operating under different names and using their power to keep Andrew Cuomo from approving fracking anywhere near the land where they wish to continue their program of buying up it up and selling it to the state at inflated prices. Doing so allows them to recycle the money and create an even bigger private preserve for themselves, which is what it’s all about. That’s why they’re determined to use the bullring in Cuomo’s nose to steer him away from any fracking deal unless it protects their special interests by excluding lands in the Delaware River basin where they operate.

It’s a story we’ve told many times but can’t tell enough, because far too many people are still unaware of what’s really holding up fracking in New York. The Rockefeller family and their allies at the Park Foundation have funded every fractivist cause imaginable, from Walter Hang’s community organizing up in Ithaca, to the activities of the Catskill Mountainkeeper and Delaware Riverkeeper. They’re also partners with the William Penn Foundation in trying to empty the Delaware River basin of middle class people who might have to earn a living  there. They fund, too, the NRDC efforts to intimidate local officials who might support fracking. 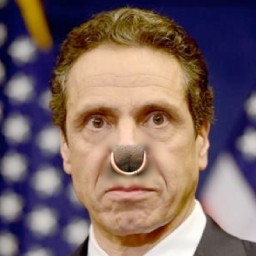 It’s a veritable war against the middle class, in fact, as this group of individuals does everything it can to buyout, intimidate, shutdown and scam the landowners and taxpayers of the area to pursue its own special interests. The guy at the center of it all, though hardly the intellectual leader, is Larry Rockefeller; proclaiming himself as a lifelong Republican who just can’t stomach the latest Republican nominee. He and his wife’s role on the Barack Obama inaugural committee might raise a eyebrow for some in that regard, but it isn’t the politics that’s important here. Rather, it’s the man with his hand on the bull ring in Cuomo’s nose, who just came out as a member of Team Cuomo and has further co-opted a governor many thought might approve fracking after the election.

What will it all mean in the end? We can’t know and probably Andrew Cuomo doesn’t know either at this point. We do know, though, what Larry Rockefeller and friends want and it’s up to the rest of us to expose it with a sunlight disinfectant unless we want to move somewhere else and just give them the Delaware River basin to satisfy their voracious appetite for land.

14 thoughts on “The Rockefeller Bull Ring in Cuomo’s Nose”