Funding of the Natural Resources Defense Council, more commonly known simply as the NRDC, and other major fractivist special interests is not only ideological but mercenary in nature.

We’ve done a lot of research over the last few years on the funding sources behind the fractivist war against natural gas development. The major funders are relatively few in number but extremely wealthy.

All are driven by ideology at some level, much of the leadership of these groups coming from guilt-ridden second, third and forth generations of descendants of the founders of the Heinz, Park and Rockefeller industrial empires who want to be recognized for good works without giving up any of the perks. Others are driven by a desire to use their wealth for power, hoping to remold man in their images. Still others are in it for profit and personal advantage. Those who fund and manage the NRDC seek all three.

Our previous research on the NRDC identified its connections with the Open Space Institute, the Catskill Mountainkeeper and, through the former, with the William Penn Foundation and Delaware Riverkeeper Network, not to mention New York State DEC Commissioner Joe Martens. The first three are essentially run by Rockefeller family interests who also have extensive personal land holdings in the Catskills and desire to expand and buffer those holdings by using the State of New York as their agent.  The last two are now engaged in a similar effort to squelch any natural gas development in the Upper Delaware watershed that might threaten those interests.

Those personal interests are not limited to land and power. Some extensive additional research on the NRDC and its funding sources reveals a third motive behind their actions; enhancing the value of investments in renewable energy.

There is no reason for natural gas and renewables to be in competition, of course. Natural gas is not only the perfect bridge fuel, as often stated, but a complementary fuel to deliver the backup power when renewables are unable to deliver. They go together, naturally.

Nonetheless, many on the other side of the fracking war are invested in renewables, both financially and ideologically, to such an extent they are fearful the miracle of hydraulic fracturing and horizontal drilling combined will destroy their investments before they can take off or delay the payback to such an extent they won’t be able to profit as they imagined. They have powerful financial reasons to delay fracking as long as possible and make it as difficult as possible.

We touched on this in earlier posts where we talked about Google’s investment in the Ivanpah Solar Electric Generating System and the role of Google founder Eric Schmidt in funding NRDC, among others, but there’s more to the story. We researched hundreds of 990 returns filed by foundations who reportedly funded the NRDC to learn just who funds it and to what degree.

We looked at the most recent fillings available which, in most cases, was for either the 2011 or 2012 fiscal year. The NRDC took in over $92.7 million in contributions in fiscal year 2011 of which roughly a third was in the form of dues and fund-raising revenue. The remainder of $59.6 million came from other contributions, which can take the form of individual gifts or grants from other foundations. We were able to identify grants from 168 such groups totaling $31.9 million or somewhat more than half that revenue. Some $25.0 million of that money comes from just 20 foundations and $19.7 million comes from just the top 10. Here’s the Top 20 list: 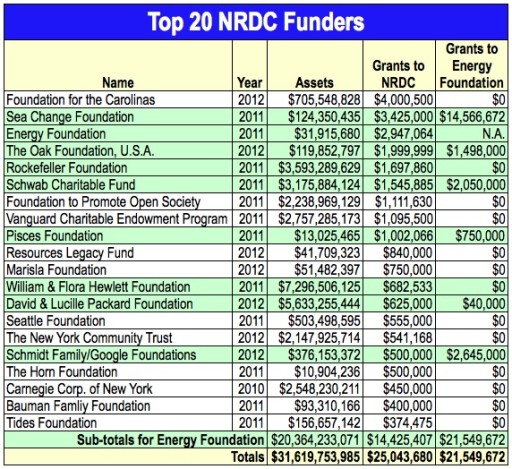 Lachian Markay at the Washington Free Beacon did an expose on the nature of the Sea Change and Energy Foundations last August and I followed it up with a piece on the Energy In Depth website.  It involved dark money passed through off-shore accounts and complex interlocking relationships among all the usual suspects. Read both pieces to get the big picture.

One thing is missing though and it has to do with the financial interests of the principal funder of the Sea Change Foundation, Nathaniel Simons. He is the son of James Simon, the hedge fund genius who is ranked 89th on the Forbes list of the world’s billionaires, having an estimated net worth of $12.5 billion, with connections to George Soros, who is No. 19 and another funder of the NRDC through the Foundation to Promote an Open Society.  James Simon was the founder of Renaissance Technologies Corp., worth $25 billion or so, in which son Nat was also a principal at one point. The Simons family has gobs of money made from hedge fund activities.

Here is how Nat Simons, though, is described in a flyer for a conference put on by the Center for American Progress (also funded in a big way by the Sea Change, Rockefeller and Schwab Charitable Fund foundations) called the National Clean Energy Summit 3.0.

Well, isn’t that interesting? Nat Simons is invested in “alternative energy and cleantech” according to this Bloomberg description. Here’s another:

Elan Management is an early stage venture investment group based in San Francisco, CA focused on the alternative energy and clean technology spaces. We invest in world class teams working across a wide range of technologies including solar, wind, water, energy efficiency, materials, transportation, energy storage and bio-fuel/chem. Our portfolio reflects our broad scope and our investments range in size from seed stage to expansion stage.

Interestingly, Elan Management recently created a fund called Prelude Ventures, which is further described here as “investing in companies that reduce negative impacts on the global ecosystem with a primary focus around energy and impacts associated with carbon and climate change.” By that, they mean the following (emphasis added):

We still believe that advancements in renewables from solar to wind will be important
opportunities. The storage sector in general is a category with many large opportunities to build substantial businesses – from advanced batteries for handheld devices, to automotive, to large grid storage. We are also looking for opportunities to bring “energy efficiency” in the marketplace but do it in a way that the customer will engage and care. Unfortunately, energy is still a very inexpensive resource in North America, and that can make it difficult for many customers to pay much attention.

NRDC and Others Protecting Investments in Higher Cost Energy?

Now we see what the whole thing is about. Affordable energy delivered via fracking is a threat to the investments of the Simons family and Elan Management in renewables and those of Google in its Ivanpah Solar Electric Generating System. Their combined $6.9 million in donations to the NRDC, and many millions more to groups such as the Civil Society Institute, Environment America, the National Wildlife Federation, the Sierra Club and the Wilderness Society, to name a few, represent protection money. That is to say the grants made to these groups are designed to frustrate fracking enough to slow it down, so prices go up and reward funder investments in renewables and cleantech. Needless to say, they’re are pretty damned poor investments right now.

We will have much more down the road on this but the takeaway from our initial findings, is this; the NRDC and its sister fractivist organizations are not only protecting land deals in the Catskills, but financial deals on the left coast (the Energy and Sea Change Foundations as well as Elan are all found in San Francisco.) This, not the environment, is what drives the war against fracking; stopping anything that delivers clean low-cost energy as an alternative to renewables. If they were smart, they’d recognize the way to go is to use natural gas as the stepping stone to more renewables development and not the enemy. but it’s clear that won’t deliver the big profits up front or build another $25 billion investment fund, so we have the fracking war instead.

15 thoughts on “Is the NRDC Being Funded to Protect Against Affordable Energy?”