The New York State Department of Environmental Conservation (DEC) has, under Prince Corruptocrat, been abused and misused to do the dirty work of the NRDC.

Last week MDN brought you the news a federal judge had dismissed a case brought by the Constitution Pipeline against the New York Dept. of Environmental Conservation (DEC) over the issue of denying water crossing permits for the project. What we have since come to understand is this was one of two lawsuits filed by the Constitution against DEC. In fact, it was the lesser of the two lawsuits. The “biggie” lawsuit is still not yet decided. That decision will come from the U.S. Court of Appeals for the Second Circuit–and is due to arrive within the next two months. The fate of the project hangs in the balance. 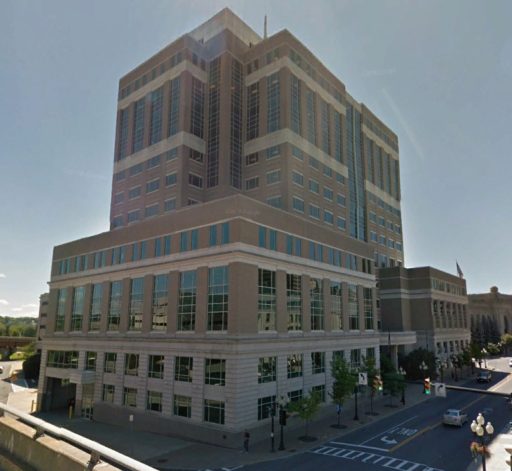 New York DEC’s not so ivory tower in Albany, NY where the minions are told to withhold permits until the Governor gets what he wants. Source: Google Earth

Lawyers for the Constitution Pipeline are confident the court will find the DEC’s denial of permits is capricious and politically motivated, and will strip the DEC of its role in the project. If that happens, it is the equivalent of a 10.0 earthquake. The DEC will, effectively, no longer play any significant role in federally regulated pipeline projects, it’s fingers having been burned by reaching too far. Perhaps if the DEC wants to maintain a role in such projects, they ought to move forward and issue those permits now (i.e. “settle out of court”), before the ruling comes down. Here’s are some excerpts from a Philadelphia Inquirer story (emphasis added):

The fate of the $925 million pipeline awaits a decision by the U.S. Court of Appeals for the Second Circuit, which heard arguments in November. The pipeline company says that the Federal Energy Regulatory Commission’s 2014 approval of the pipeline limits the state’s authority, and that New York’s denial of the permits was arbitrary, capricious, and politically motivated.

The court’s ruling, expected in the next few months, could have nationwide implications for interstate pipeline projects, which have become battlegrounds for climate-change activists seeking to slow the growth of fossil-fuel development.

Though the Constitution Pipeline was able to secure permits in Pennsylvania, where state policy has been more accommodating to the gas industry, it ran into stiff opposition in Albany, where fossil-fuel producers have less clout and anti-fracking interests have Gov. Andrew Cuomo’s ear.

Permits that the New York Department of Environmental Conservation denied would have allowed the pipeline to cross more than 250 streams and about 80 acres of wetlands. The pipeline company said New York state used its “narrowly circumscribed jurisdiction to, in effect, veto a federally approved interstate pipeline project.”

The case has attracted attention from environmental groups such as the Natural Resources Defense Council, the Waterkeeper Alliance, Earthworks, and PennEnvironment, which urged the appeals court to uphold the permit denials “to ensure that states remain arbiters of their own water quality.”

In 2014, FERC determined that the Constitution Pipeline’s benefits outweighed any adverse effects, including those on landowners and surrounding communities. It also found that the project would cause some adverse environmental impacts, but that the impacts would be reduced to “less-than-significant levels” with some mandated design modifications, including horizontal drilling beneath some streams to reduce disruptions to waterways.

A key part of Constitution’s claim that the decision was politically motivated cites a conversation said to have taken place in August 2015 between its contractor and a New York environmental official, Christopher Hogan, who indicated that “although NYSDEC was ready to issue the permits, the governor’s office was not.”

New York issued its denial eight months later, on April 22, 2016 – Earth Day. It dismissed the significance of the “hearsay” conversation with the state environmental official, saying he was not the decision-maker “authorized to reach a position and bind the agency.”

Editor’s Note: As with all things Cuomo, there’s so much more going here. Andrew Cuomo a/k/a Prince Corruptocrat is bought and paid for by the NRDC gang, the Rockefeller clan and friends. The last DEC Commissioner, Joe Martens, came from the NRDC gang’s Open Space Institute (run by Rockefeller descendent Kim Elliman) and went back there after killing fracking “at this time,” which was his apparent assignment. The current DEC Commissioner, the little Napolean, Basil Seggos,also has strong connections to the gang.

Larry Rockefeller, the godfather of the gang, and Lucy Waletzky, his sister, tell both Corrupocrat and Attorney General Eric Schneiderman what to do, when to do it and how far to go. Corruptocrat, like any good capo, does the same with the DEC. The professionals in that agency, of which there are many, are trapped in the web of corruption and deceit that is the Cuomo administration, forced to issue permits for the favored and deny them for those who are politically incorrect or haven’t paid their dues so to speak.

Poor Christopher Hogan is the face of the DEC bureaucracy caught in the web; the unfortunate fellow who simply told the truth in trying to explain why he could not continue to honor the professional good faith he had, heretofore, kept with this applicant, the Constitution Pipeline. The corrupt exercise of power by the NRDC gang is nowhere more evident than his simple statement that “although NYSDEC was ready to issue the permits, the governor’s office was not.” It speaks the truth; that DEC is no more than a political weapon to this governor, a gun held at the head to secure favors for Prince Corruptocrat and his own masters.