New Brunswick’s Jim Emberger recent correspondence with a local natural gas supporter demonstrates the closed-minded attitude of so many fractivists.

The correspondence came about when a friend and natural gas supporter frustrated with the activities of American transplant, Jim Emberger, to stop natural gas development in New Brunswick wrote to thank him “making it [his] missions to ensure that New Brunswick does not reach it’s potential, that our economy does not grow, and that we remain a poor, ‘have not’ province with little hope on the economic horizon.”

My friend noted, too, that “families are being torn apart for months at a time as mothers and fathers, husbands and wives, head to Alberta, Saskatchewan and Newfoundland to work, some trying desperately to keep their homes here, many giving up and leaving never to return here. She pointed out there were “174,000 wells hydraulically fractured in Alberta with zero contamination to wells or ground water.” 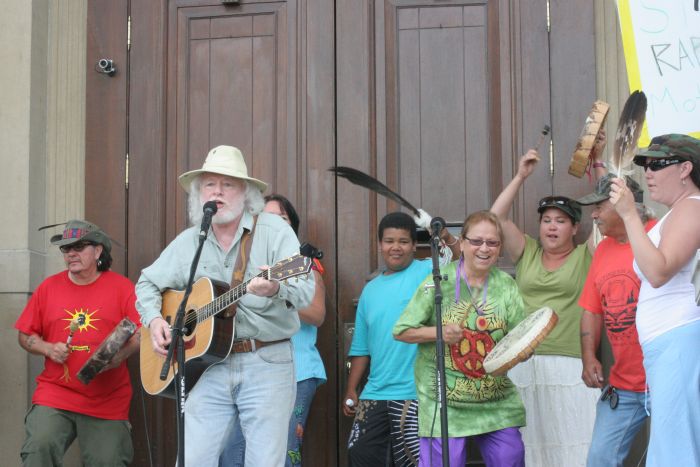 Jim Emberger, pictured above at a New Brunswick anti-gas rally leading his gang in song, replied to this heartfelt correspondence with a condescending attempt at a putdown that only illustrated the shallowness of his own position. Here’s what he said (in block quote) together with some observations of our own:

I don’t suppose anything I say to you will change your mind, and I won’t respond to any more of your emails. But if you really are interested in answers to the questions you asked me and the accusations you made, here is some reality – not some sensational internet or Facebook page.

Really, Jim? Don’t all the antis get their information from Facebook sites like this one from your friends? Weird. Reality from you? We shall see.

I have spent a lot of time in Canada over my life and moved to New Brunswick for its quality of life. I lived here for 5 years before I ever heard of shale gas.  I heard of it about the same time the seismic testing trucks showed up on my road.

We want to make sure we have this correct: you never heard of shale before coming here? Funny, but we’ve researched your activities in the United States, and you’re a serial protestor who almost assuredly heard of shale before moving here. Interesting. Either our information is correct, and you are embellishing the details, or our information is completely wrong and you have absolutely no credentials when it comes to shale expertise other than being a predictable protestor looking for the spotlight. Fun dichotomy, no?

No one had asked me or any of my neighbors, most of whose families have been here for hundreds of years, if we wanted shale gas wells next to our homes.  That is why I became involved – to protect myself and my neighbors.

Wow, the people’s champion! What the interests of your neighbors, the ones trying to survive in this poorest of all Canadian provinces, who desperately need this economic development, Jim? Any concern for them?

I and the others in our movement have financed our work out of our own pockets and by bake sales, benefit concerts and bottle drives, etc.  During the Voice of the People Tour, signs were provided by several labor unions, who represent gas workers, actually. That is the extent of outside support.

What “movement would that be, Jim? What interests do you represent other than that of retired NIMBYs who don’t need to worry about earning a living? We know you receive support from the Council of Canadians, part of the $2,000,000 they pour into local groups via offices and campaigns. In fact, we know, through Maude Barlow, that the anti Canadian oil and gas efforts are funded by outside, US interests to the tune of at least $1,000,000, including money provided the Park Foundation, the Rockefellers and their ilk.

The rest of the stuff you hear on right-wing stations like Sun TV, and on-line blogs, is simply fantasy.  Have you ever seen proof otherwise?

What “stuff” would that be, Jim, and what kind of argument is that? And, what “proof” are you talking about? You lost us. Are you saying we’re supposed to prove a negative while you rely upon speculation? So defensive, really. We think you also forget your own blog posts, which are pure fantasy on the order of a bad science fiction movie. And, then there’s your CBC, of course, with its politically correct template.

If you think I am making up the science, then you should actually go check out the references listed in the report by the Council of Canadian Academies who reviewed the science, and also any of the many public health reports that did the same.

We’re not sure how you would make up the science, Jim, given you are, by your own words, not a scientist, but what reports do you mean? The debunked ones like the Wolf Eagle report on Dish, Texas, or Howarth and Ingraffea’s discredited junk science or Lisa McKensie’s flawed studies? They’re all cited by the Council, Jim. Perhaps you could narrow our search for us. Assertions without specific references to credible science mean nothing, no matter how condescending you try to make yourself sound.

Have you ever actually seen the facts that support the claim of 175,000 wells with no problems?  It gets repeated a lot, but no source for it is ever mentioned. You might want to visit Albertavoices.ca to see some first hand reports from Alberta.

Well, Jim, it’s supported by the Government of Alberta itself, and you can check it out here. Also, Bart Johnson, a spokesman for the Alberta government recently said “In regard to hydraulic fracturing generally, the technology has been used safely in Alberta for over 60 years and its use is tightly regulated and monitored by the Alberta Energy Regulator.” He also stated that “Approximately 174,000 wells have been fractured in the province since the technology was introduced in the 1950s.” Your suggested source, ironically, is an anti-gas “online blog” engaged in “fantasy” of the sort you accuse us of relying upon. You forgot to mention Jessica Ernst though.

Finally, there are many better ways to bring jobs to New Brunswick and keep our families together. Even if shale gas were to come here, it is an industry with a short life span that employs very few people after the wells are drilled.  Alberta makes its money on conventional oil and gas and the tar sands, very little on shale gas. So in a few years we would be back where we started.

You mean the Council of Canadians fantasy of “15 jobs for every $1,000,000 invested in clean energy” – the one apparently cited in this fantasy piece, which pretends there are no jobs in oil and gas despite the fact New Brunswick residents go to Alberta to get them, where 121,000 people are employed in the mining, oil and gas sectors? 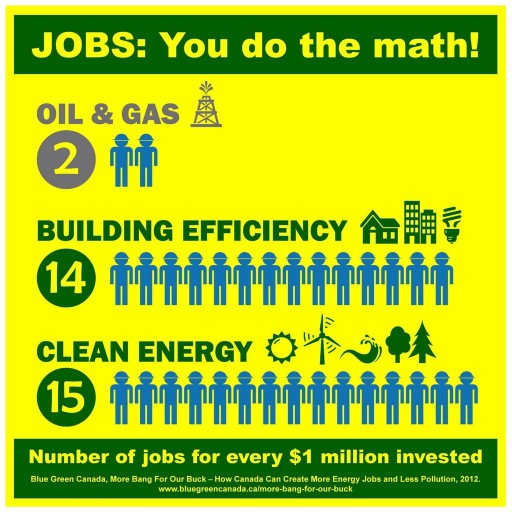 Sorry, but studies done by respected economists disagree with you, Jim; it’s pure fantasy, yet again. Never mind the actual experience of jurisdictions where there is a shale industry. Here’s what things really look like (compare the top and bottom lines) and notice what a difference oil and gas makes to the Alberta gross domestic product, which, of course, translates directly into all those jobs, jobs we’d like to have in New Brunswick:

By the way, Jim we’ve done our research and shale has the potential to make a major contribution to Alberta’s future natural gas supply. AND, you refer us to an Alberta blog? No comparison, huh?

And maybe you don’t believe the science about global warming.  I do.  It says that we cannot add any new sources of fossil fuels or there won’t be a livable world for your children or family.

You are entitled to your beliefs, but please stop shoving them down our throats.

So you may disagree with me, but I am not part of any plot.  I work to protect myself and my neighbors, and hope to save the planet for all of us – yourself included.

Thanks, but no thanks, as the planet will do just fine without being saved by you, Jim. We’ve seen how effective your previous ventures have been. We never asked you to save us. It seems you suffer from a spell of cognitive dissonance.