Every week there are new outrages from the wild wacky world of fractivism. Their “experts” are among the wackiest of all and their credibility is zilch.

It’s time for another installment in the chronicles of the wild wacky world of fractivism where the “experts” are among the wackiest of all, the evidence seems to routinely come from junkyards and the loudest advocates of all are the biggest dissemblers and hypocrites.

Rounding Up the Hypocrisy on Stream Protection

Let’s take Maya van Rossum, for example, who gets away with one outrage after another by trading off her Chihuahua attack dog public persona (privately, she’s much more gracious) to attract the attention of empathetic media types. She’s in the news yet again and this time it’s not fracking she’s picked as a soapbox, but farming, though the story serves well to illustrate the fractivist mentality. 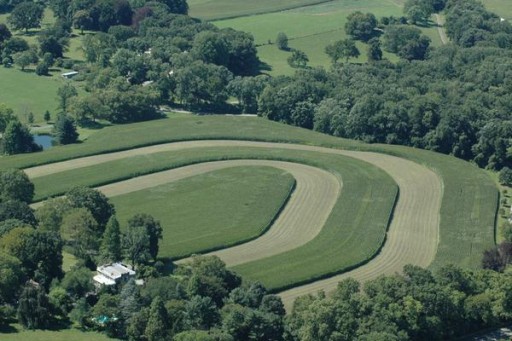 It’s all about a farm in her home township of Radnor in Delaware County, Pennsylvania. She grew up in Radnor and continues to live there (she works out a natural gas heated office in Bristol). Radnor is no ordinary community and this is no ordinary farm. The median household income for 2011-2013 is $110,067, more than twice that of Pennsylvania as a whole ($51,953) and the average home value is $623,000, almost four times that of the Commonwealth ($164,300).

Radnor has the money to burn to preserve open space by buying it and, recently, it bought 71 acres of a 311-acre farm property for in the township for $11.6 million (that’s $163,380 per acre for those of you who are fractivists and don’t understand property values). It then leased the acreage back to the farmer but Maya has a problem, similar to the issue she raises against fracking – she’s worried about the chemicals. Here’s an excerpt from a story in the Delaware County Daily Times (emphasis added):

“It’s our land not his land,” said Pilling, said of Billheim.

“Pesticides and herbicides work by dismantling natural physiologic mechanisms, including DNA replication, said Capuzzi. “If they do this to insects and plants, of course they could potentially do this to people and pets. So I can’t imagine that it’s a good thing to have these chemical applications in residential communities.”

Maya van Rossum, a Radnor resident and the Delaware Riverkeeper, said the township should require the farmer to use “sustainable farming practices.”

“Chemicals are dangerous for water quality, critters and people,” said van Rossum. Part of the problem is that wind and water can “carry these chemicals offsite and bring them into non-target” areas,” she said.

Since it’s now land that is owned by the community, the farmer should not use “broad spectrum chemicals.”

“That is a big piece of land,” said van Rossum. “The community is already going to be impacted by the development on a portion of Ardrossan. What is left should be cared for and used to the maximum benefit of the community possible. Chemicals should be top of the list. We should not be using dangerous chemicals.”

There are streams that flow through Ardrossan and “don’t have any buffering. So if chemicals are being used on these landscapes, there is a direct pathway to the waterway,” said van Rossum.

There’s lots we could say about these comments; beginning with the fact Maya’s apparently very comfortable living in the middle of high end development projects of $1 million or more homes who, undoubtedly, use all kinds of chemicals to kill their lawn weeds, melt their driveway ice and otherwise maintain their properties, including the Radnor Valley Country Club golf course and the other two nearby. That isn’t what she wants for us in the Upper Delaware. She wants to help “make a wilderness” where we live. Moreover, her view of farming is that it must be “sustainable” to be good and, of course, she gets to define it. 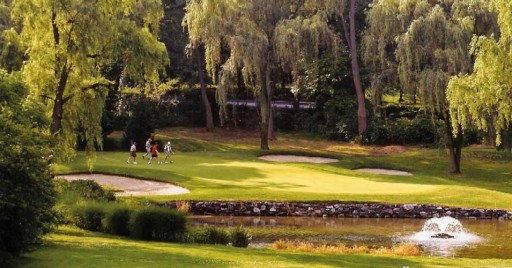 What got my attention, in fact, was her opposition to the use of “broad spectrum chemicals,” as part of farming, especially in the vicinity of unbuffered streams. She has a quite different opinion when it comes to things on her priority list. She is the top listed contributor to a Delaware Riverkeeper report called the Adopt-A-Buffer Toolkit: Monitoring and Maintaining Restoration Projects (funded by the William Penn Foundation, of course). Go to pages 109-110 and one finds this (emphasis added):

Many riparian plantings are designed to stabilize the streambank and provide a natural filter for storm-water runoff and floodwaters. Other functions include enhancing terrestrial and aquatic wildlife habitat by providing food, cover, and nesting sites. Properly designed field plantings can serve multiple purposes and are easier and less costly to maintain than typical lawn. Some municipalities have planted wildflower meadows as “showpieces” adjacent to trail sides or picnic groves.

Converting fields already covered with cold-season grasses, such as lawn or old pasture, to warm-season grass and wildflower meadows requires removal of sod or control of existing vegetation. Deep-rooted perennials and woody species may require special removal and/or control measures. For larger buffers the primary ways to control existing vegetation is spraying them with glyphosate (Roundup®) or tilling them into the soil.

Roundup®, of course, is a broad spectrum chemical and the one specifically referenced in the Daily Times article as being used by the offensive Radnor farmer. It’s also available off the shelf in various strengths at the local lawn & garden store. It’s a great product that’s very safe for animals and one I use every summer. My brother also uses it on his farm.

Maya also recommends it to create riparian buffers (that’s a stream buffer if you’re one of our fractivist readers). It’s a wonderful thing if you define “sustainable” as replacing natural growth with wildflowers to protect the stream, but a nasty dangerous thing if you want to farm near the stream. Get it? This is hypocrisy on steroids, but what we’ve come to expect from Delaware Riverkeeper and other fractivists of her ilk.

Junkyard Dogs in the Wild Wacky World of Fractivism

It was nothing short of amazing when Yoko Ono and Susan Sarandon pulled up to Ray Kemble’s junkyard in Dimock (in their Mercedes bus no less) to hear his wild tales about the pollution of his water supply (dripping anti-freeze and oil from his old vehicles had nothing to do with it, of course). It was at the moment I knew Dimock was over as a case. If you have to rely upon this man as your evidence, you’re clearly desperate. 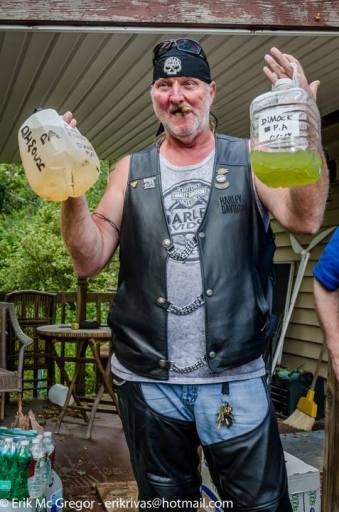 Ray continued to be a favorite among the more radical fractivists for a while because he’s a bonafide character who knows how to play the role. He got carried away with flamboyantly waving around his water tests, though, and it became apparent the only thing he had was tests showing his water met standards, except for the high sodium attributable to the salt from his water softener. The glow has all but worn off except for a handful of the wackiest fractivists from groups such as the insane Sane Energy, brought to him by the now equally discredited Vera Scroggins. 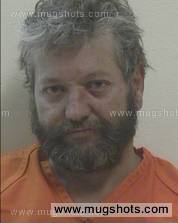 But, before Ray, there was another junkyard operator who got a lot of attention and he’s still at it. His name is Loren Kiskadden. He has a mug shot and I wrote about him back in 2012 for Energy In Depth, showing a similar set of facts to Ray Kemble’s in that Kiskadden’s water well is in the middle of a junkyard and he, too, wants to claim it’s the fracking that’s caused a problem (assuming he has one). Kiskadden’s case involved many distractions and continues in the courts to this day.

Some of our readers have been following the case and noted who Kiskadden is using as an expert: none other than Paul Rubin, the favorite fractivist hydrogeologist used by the Delaware Riverkeeper and many other such groups, who was essentially tossed out of court on his arse by a New York judge recently. He’s also the favorite fractivist junk scientist of the slimy Napoli Bern Ripka Shkolnik & Associates trial lawyer firm associated with the now arrested Shelly Silver, Speaker of the New York State General Assembly. 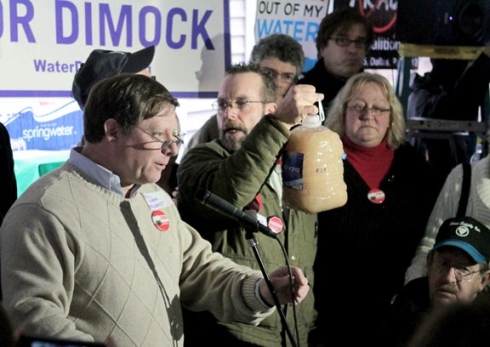 Paul Rubin speaking at 2011 Dimock protest with the infamous Sautners. Note the “Drilling Isn’t Safe” buttons worn by all, including Rubin

If you’re like me, your reaction is to marvel at what a small world, the wild wacky world of fractivism really is. They are driven to use the same people, the same “experts,” over and over again until their credibility is completely shot because they have no real science on their side. Here’s some of what Pennsylvania’s DEP has told the Commonwealth’s Environmental Hearing Board on the subject of Mr. Rubin:

Appellant’s experts failed to offer compelling, credible testimony or establish a hydrogeological connection. Appellant’s hydrogeologic analysis largely relied upon circular reasoning, which assumed that the existence of substances in the Water Well proves a connection with the Yeager Site. This analysis is clearly flawed. Testimony by Appellant’s expert witness Paul Rubin illustrates this defective approach. He said that the presence of sodium in the Water Well and Yeager Impoundment shows a hydrogeological connection. Sodium is ubiquitous in the environment. It is one of the “top ten” most common elements on earth.

The existence of sodium, a common element, in the Water Well and also in oil and gas fluids is a coincidence, not evidence of causation…Thus, finding sodium in the Water Well and the Yeager Impoundment is not surprising, and proves nothing – certainly not a hydrogeological connection. Appellant’s hydrogeological argument is ipse dixit, not science. Saying something is so, does not make it so…

DEP’s conclusions regarding Mr. Rubin’s credibility fall right in line with those of the New York judge. They were, clearly, stunned with the sloppiness of Rubin’s testimony, which included these footnoted gems (see, too, the Range Resources brief at page 48):

Appellant’s geological expert, Paul Rubin, asserted that, “the fact that contaminants that were present on site are showing up in the Kiskadden well shows that, you know, they are getting there somehow.”

Appellant’s expert Paul Rubin also testified that water could flow any direction from the Yeager Site.

Yes, water can flow in any direction, just like fractivism. It goes where the need for the junk science is – just like the arguments from Maya van Roundup@. It’s a new world, this wild wacky world of fractivism; one where science and water can both run any direction and the same junk scientists end up as “experts” on the same teams using different facades. Hypocrisy is the order of the day and words such as “sustainable” provide the cover. Dogs run wild there, too, whether they’re of the Chihuahua attack species or just junkyard dogs.