There is nothing that so much characterizes the fractivist gang as their willingness to say anything, do anything to get their lies across (they hope).

The barrage of nonsense being delivered by the well-funded fractivist crowd in a last-minute effort to foreclose fracking in New York is pretty astounding. They are in a “say anything, do anything” mode right now and getting more ridiculous by the moment. It’s a classic case of what farmers refer to as throwing a shove full of manure against the wall and hoping some of it will stick. Those of you from outside of New York may think it doesn’t affect you but, of course, it does, because New York is what the battle is all about for the fractivist contingent, wherever they’re at work. The big funders of the fractivist effort (the NRDC and friends) care about little else.

Let’s take a look at some of the most recent “say anything, do anything” activities of the fractivist crowd, which operates at two levels; the elitist funder level and the useful idiot level. The latter are typified by the likes of the youthful robots and aging hippies at Energy Justice Summer who we wrote about here and here. They are funded by the usual suspects (Park Foundation, Rockefeller family, Teresa Heinz Kerry, et al) to do their dirty work. They’re perfect for it, of course, being the sort of stooges who haven’t yet figured out how they’re being used but who are eager to save the world and convinced the ends justify the means they use to do so. Hence, the “say anything, do anything” modus operandi. 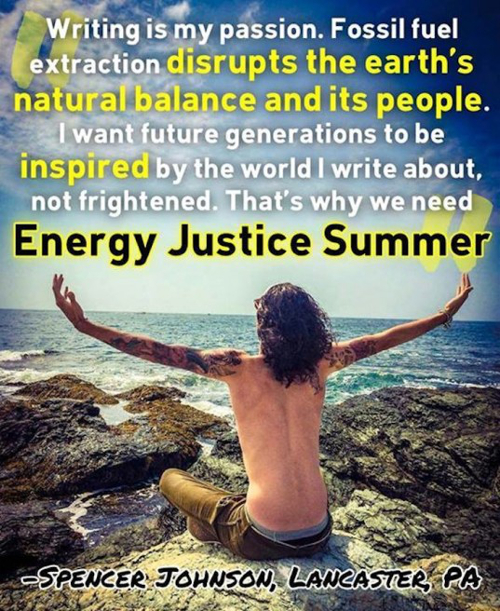 Our first example comes from the UK, via our friend Nick Grealy, who passed along a post from a site called Talk Fracking which says it’s funded by Lush Cosmetics (a Rockefeller d/b/a 350.org partner) and something called Humanade, a London-based charity that says it’s all about “fund raising and grants giving to environmental and ecology issues” and seems to spend a lot more than it takes in. Humanade apparently exists to honor the memory of Malcolm McLaren, a creator of punk rock and the manager of the Sex Pistols who happily described himself as “a charlatan, a con man, or, most flatteringly, the culprit responsible for turning British popular culture into nothing more than a cheap marketing gimmick.” No wonder they love the fractivist cause.

Anyway, Talk Fracking put up a post called “Greetings from the Frontline Shale Fields of Susquehanna County, Pennsylvania” yesterday as an appeal to UK residents to be warned of the dangers of fracking from someone who has seen it up close. Here are a few of the excerpts (emphasis and link added):

My name is Spencer Johnson and I’m working with a grassroots group called the Energy Justice: Shale Initiative in Montrose, Pennsylvania, where the gas industry has been hard at work since 2007. Gas pads, compressor stations, and infrastructure surround us on all sides, frack trucks block the roads, we gather our water from an artesian well because we cannot trust our tap––we are truly on the front lines of the war against fracking…

The evidence and documents I’ve seen cannot be re-created and to see some of the chemicals and substances found in the water wells of my friends and community members is somewhat unbelievable. Benzene, toluene, butane, acetone, lithium, barium, and strontium are among them. Many of these chemicals are carcinogenic at every level of exposure and none of them should be found in drinking water aquifers…

For those who say water cannot be contaminated by the drilling or fracking process, I will pay for the ticket that brings you to the United States to Dimock, Pennsylvania, where my good friend Ray Kemble’s water changes color daily and burns the nostrils, causing dry spells, fainting, and permanent body rashes.

We are being sacrificed in Pennsylvania. Others, throughout the U.S. and the world, enjoy the gas that is piped out of our state, not knowing about the horrors that this industry hides behind clever campaign ads and political donations. Heed the warning from the frontlines. Ban Fracking Now. Everywhere you can. Before it’s too late…

We can stop fracking the earth, blasting apart our mountains, and poisoning our water. We can transition workers, transition our political systems, and transition our mentalities to conserve and protect rather than exploit and destroy. We have the necessary tools, we need only the political will to make a difference, the passion to speak for the animals and trees, the power to speak for the children of future generations…

Spencer, a Franklin & Marshall College alumni who says he’s already written two novels but apparently never had a job, is correct in saying his evidence can’t be recreated and unbelievable. It is falsehoods all the way – a novelette of sorts. He gives away the game at the end, of course. It’s not about fracking for him but, rather, youthful rejection of the system that got him to a point where he could reject it without consequence, while putting on the robe of moral superiority. He wants to transition not only our politics but our mentalities as well and he has the money to offer cross-Atlantic plane tickets to his UK friends to come meet Ray Kemble. I strongly encourage every UK reader to take him up on this. Do it now, in fact!

Let me provide some examples, in fact, of the treat you’re in for if you would only take Spencer up on his generous offer. It costs but an e-mail or phone call, after all. You can reach him through Mike Ewall, his boss at Energy Justice Network at 215-436-9511. Please call or write and get your ticket now to meet Ray Kemble in person:

Spencer Johnson tells us we, like him, should reject the word of both the Pennsylvania Department of Environmental Protection (DEP) and the Environmental Protection Agency (EPA) in favor of Ray Kemble’s word. Skeptical? Well, there are plenty more Ray Kemble fractivist footage out there for those of you who want more “say anything, do anything” antics, but’s let’s focus on Ray’s statement at 1:50 that “you’re going to be in a body bag after you drink that water” which is followed by screenshots of the water tests to which he’s referring. Here they are: 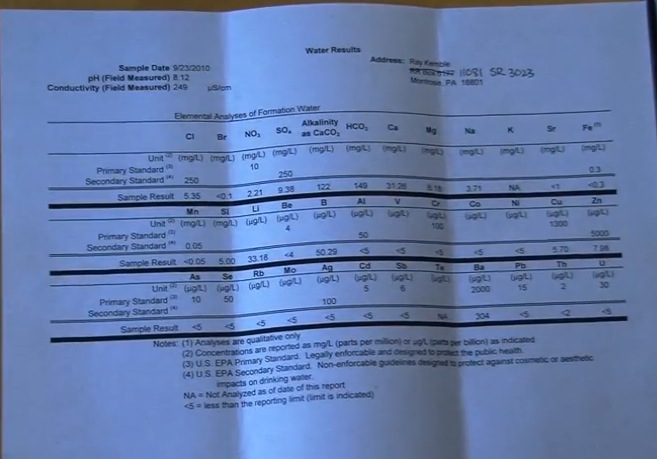 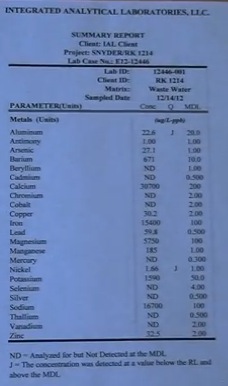 This particular table compares test results with minimum detect levels for each item (the lowest amount at which the testing will accurately reveal the presence of the item). We see the highest results (none exceed EPA standards) are to be found in the case of sodium (salt that is likely attributable to Ray’s water softener), calcium and iron, the latter two being completely natural and tending to accumulate in wells that aren’t used regularly. Infrequently used water sources will often have an orangish color from the iron, in fact.

What we have, therefore, is total BS from Ray Kemble and friends. The DEP and EPA are correct. There is nothing in his water that exceeds drinking water standards and those things that are higher than normal are not only not dangerous, but a direct result of his not using the water. Moreover, anything else in his water is either natural or a consequence of living in the midst of his junkyard operation (yes, his home is adjoined by his junkyard – see Google Earth view below). 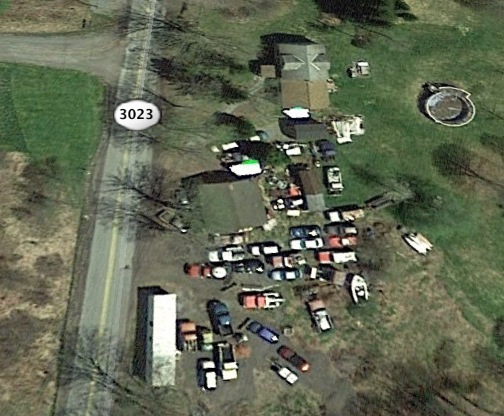 Ray Kemble’s video appearances are merely an extended adventure movie for him where he gets to play a starring role with the likes of Yoko Ono, Susan Sarandon and Bobby Kennedy, Jr, as supporting actors. He is the epitome of the “say anything, do anything” fractivist crowd, marched out by the likes of NRDC and others as evidence of why fracking isn’t safe. It tells you just how little they’ve got to work with.

Ray Kemble is far from the only “say anything, do anything” fractivist out there. Tomorrow, we’ll take a look at some others, including the Pagan Environmental Coalition (yes, there is one). Meanwhile, get your plane tickets! Do it now!

9 thoughts on “The Fractivist “Say Anything, Do Anything” Template”