Food and Water Watch, one of many radical political groups operating as charities, hides its political advocacy in what are ostensibly fund-raising letters.

Earlier this week, I discussed the Internal Revenue Service rules that are supposed to limit the political activities of charities and explained what appear to be gross violations of those rules by organizations such as the William Penn Foundation and its well-funded puppet groups. It’s outrageous how wealthy elites are getting away with exercising huge political influence under the cover of being “charities.” The abuses are nothing less than scandalous and they’re aren’t limited to the trustfunders and their phony foundations. There’s also the odious Food and Water Watch, which is abusing the system in an entirely different way. 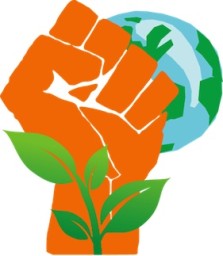 I’ve written about Food and Water Watch several times on this blog, telling readers about who Wenonah Hauter really is, the group’s extremist connections and radical philosophy, their money raising flimflams, their Canadian connections, both their dark and conventional sources of funding (Including the Park Foundation in the latter case) and the blatant political activities of their wacko representatives on the ground.

One of the questions that’s been bedeviling me as I’ve researched how Food and Water Watch operates is why they put so much effort into fund-raising e-mails and letters when, in fact, it’s clear the bulk of their money comes from the dark side via donor-advised funds where no can trace who’s really feeding the beast. Here’s what I noted in my first hard look at their fund-raising:

[Food and Water Watch] took in 75% of its revenue in 2012 from just two donor-advised funds; the the Greater Kansas City Community Foundation and the National Philanthropic Trust and no one will ever have a clue who’s really exercising the political influence.

And, make no mistake about it, Food & Water Watch is a political organization. It may be classified as a “charity” but everything it does is political in nature. It also uses the NY-PIRG trick of setting up a companion 501(c)4 organization that supposedly is the separate political arm, but it simply loans that organization money from the “charity” side at no interest whenever it needs it.

Moreover, because the organizations share staff and space, etc. any allocation of spending between the two is purely theoretical anyway. Food & Water Watch faithfully reports on its 990 returns that its lobbying activities fall below IRS permitted maximums for “charities” but these devices allow it to hide what’s really happening and when you compound this with the fact no one knows where the money comes from, you have enormous hidden political influence, much of it directed toward opposition to natural gas development…

It’s also worth noting Food & Water Watch, in 2012, according to my research, received $8,971,200 from the two donor advised funds, $290,000 from the Park Foundation and $50,000 from the Rose Foundation for Communities and the Environment. That left $2,687,409 that came from public fund-raising of the sort we see in all those solicitations they send out. They spent $751,105 collecting money, so that represents 28% of what they didn’t collect from big-money groups. That’s a far cry from the 7.5% they’d have us all believe.

We now have some newer figures to analyze and the picture has become more clear. Food and Water Watch took in $13,222,186 in 2013, all but $13,102,109 of which came from contributions and grants, the remainder having been mostly investment income (they had $5,468,662 in cash on hand and investments in securities). That was up 11.8% over 2012 – fractivist activity has been good for their business model. They took in $3,000,000 from the Silicon Valley Community Foundation, $2,245,000 from the Greater Kansas City Community Foundation, $1,150,000 from the Chicago Community Trust (all donor advised funds are the equivalent) and $375,000 from the Park Foundation, among other sources. That leaves $6 million or so that was raised from other sources we can’t directly identify (yet), which includes all the small donations it solicits with letters such as this one: 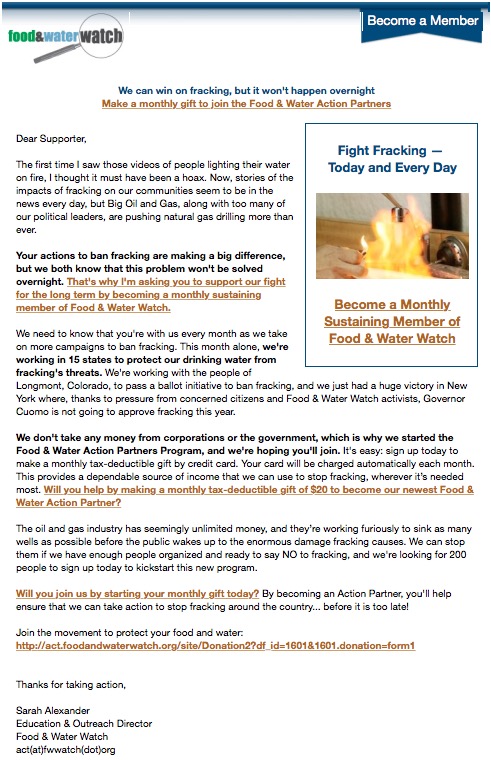 This one, directed at Michiganders a while back, includes “10 fundraising appeals in a single 500 word email with eight of those linking directly to either the group’s general donations page or its monthly donations program, based on EID’s count.” Suggests it’s all about the money doesn’t it? That may not quite be true, though. It also has an overtly political message intended to influence legislation (e.g., the Longmont fracking ban), which takes us to how Food and Water Watch conducts these appeals.

Part the answer may be found on Schedule G of the 990 return: 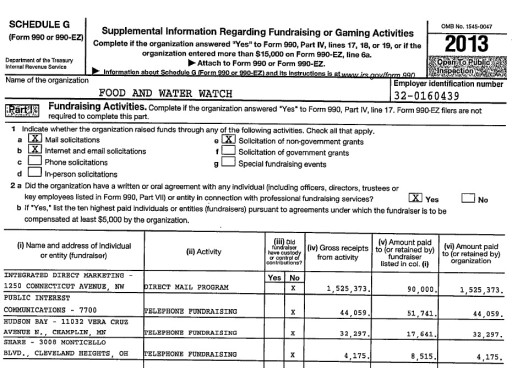 It doesn’t appear the form is completed properly as the last two columns to the right should add up to the third from the right, but we can still see what’s going on. Food and Water Watch paid Public Interest Communications $51,741 to conduct a phone solicitation and netted $44,059 from that activity. Its fundraising expenses in that case were 54% of what it received. They were 35% in the case of a similar effort by Hudson Bay and 67% for Share’s program.

Still another part of the 990 (Part IX) shows this:

Notice how Line 26 refers to “joint costs…from a combined educational campaign and fundraising solicitation” which totaled $1.6 million in 2013. “Educational,” of course, means  political in the case of Food and Water Watch, which is a scandal all by itself, and the split of costs is purely arbitrary on their part.

Now, we see what’s happening. Food and Water Watch is making relatively little money from its fundraising program and it is hugely wasteful. They’re doing politics with their appeals and paying for it with the contributions of naive recipients who are doing little more than paying for the communication they received. Meanwhile, they’re raising mega-bucks from the Park Foundation and unknown dark money funders to cover the salaries and the expenses of the operation. You’ll have to look hard for anything in the way of true education, research or anything charitable. It’s all politics disguised as “education” and fundraising.

If you go to the site of the New York Charities Bureau, search for “Food and Water Watch” and click on the top “Annual Filing for Charitable Organizations” link, in fact, you’ll find the contracts with all the fundraisers, which include arrangements such as this one for Colorado fundraising: 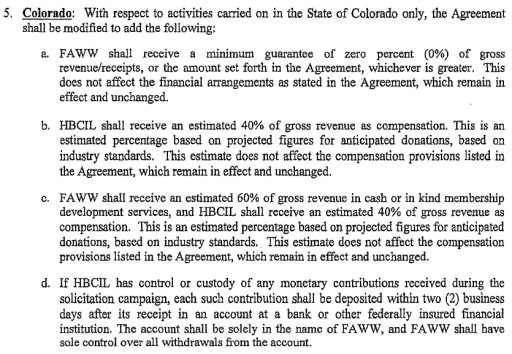 Notice the 40% share going to the fundraiser. It’s a terrible deal and far, far different than what Food and Water Watch would have us believe about its fundraising expenses because the bulk of its money comes from rich elitists with agendas who don’t want their name known, except for couple of the usual suspects such as the Park and Sustainable Markets Foundations.

Food and Water Watch is a farce from one end to the other. It’s purely political in every way as any casual observer can detect from its communications, its activities and its bragging. Yet, it enjoys a 501(c)3 tax-exemption that allows its mostly secret donors to get deductions for those donations. It’s a travesty and its way past time the IRS did something about it.

7 thoughts on “The Food and Water Watch Funding Farce”