No one could write a believable script to match the wild wacky world of fractivism. Yet, this irrational behavior is given credibility by some legislators.

We recently became aware of yet another Dimock tour yesterday by fractivists out of New York City. Called the Fracking Reality Tour, the tour was apparently organized by Food & Water Watch and documented by a guy known as Minister Erik R. McGregor. We don’t know an awful lot about it, but the pictures on McGregor’s Facebook page tell us enough to know what happened. It was less a reality tour than another wild and wacky exercise in fractivism.

These tours are surreal to the max and wouldn’t justify our attention except that they continue to attract the interest and support of Big Apple politicians, who, on the political scale, are often several degrees removed from reality, so far from the mainstream as to operate in some other parallel universe. This one apparently involved New York City Councilmember Donovan Richards, who represents Far Rockaway and nearby areas of Brooklyn and chairs the Council’s Committee on Environmental Protection.

There were several interesting personalties involved, beginning with Minister Erik McGregor, pictured below: 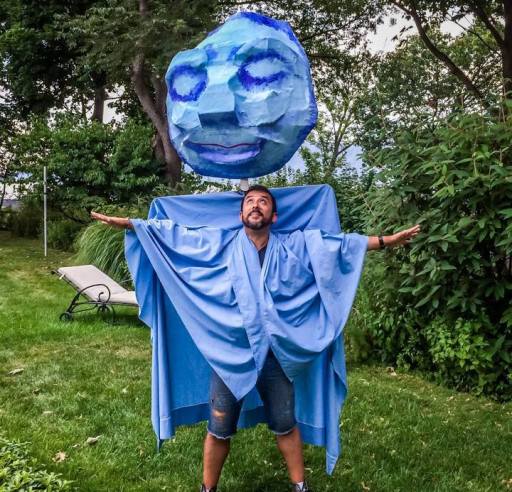 McGregor, a photographer, is associated with an Occupy Wall Street “Call to Action and Media Working Group” and fancifully refers to himself as “Supreme Ruler and Magnanimous Omnipresent Leader.” The Minister tag apparently comes from part of the Universal Life Church Monastery, where you can be ordained on-line for free. He’s also part of the “Reverend Billy And The Stop Shopping Gospel Choir,” an “irrepressible choir [that] can conjure soaring harmonies lovely enough to convert even the most jaded consumer into a stop shopping true believer.”

Then there is Eric Foodandwaterwatch, who, in real life is Eric Weltman, a “Senior Organizer” for Food & Water Watch in New York. “He has over 20 years of experience leading social justice campaigns and building progressive power,” their website says. They add that “Eric has helped direct ground-breaking coalitions, organize high-visibility media events, write influential publications, and manage successful initiatives to pass legislation, fund programs, and elect candidates.” That’s funny; I thought Food & Water Watch was a 501(c)3 non-profit charity, not a political organization. Those IRS double-standards sure are difficult to grasp.

Also on the Fracking Reality Tour was Kevin G. O’Neill. O’Neill is a “Commercial Project Developer” at SunUp Solar and a big-time opponent of the Algonquin Pipeline Expansion, as his Facebook indicates. That project, part of the Spectra Pipeline system, will deliver natural gas to New York and New England so it doesn’t freeze this winter. O’Neill was formerly associated with Citizen Action of New York and resides in Scarsdale, NY where 74% of households heat their homes with natural gas. Obviously, they don’t need a pipeline or any fracked gas. So, they brought in Matt Walker from the Philadelphia-based and Heinz and William Penn Foundation funded Clean Air Council to help oppose it. All the usual suspects are also involved (e.g., Delaware Riverkeeper, Catskill Citizens, Damascus Citizens, et al), demonstrating how few people fractivism really depends upon.

Next, there are the serial protestors who are employed to do this astroturf. Alex Lotorto, who hasn’t missed a protest since high school was there. Alex likes to claim he’s part of the “Wobblies” or Industrial Workers of the World, as it’s more properly known which is a radical, international industrial union formed in 1905. They promote the idea all workers should be “united as a social class to supplant capitalism and wage labor with industrial democracy,” whatever that is. Alex lives in Milford, far from any fracking, but goes wherever the cameras go to oppose it or anything else that might attract attention. Here he is in Wilkes-Barre at a Susquehanna River Basin Commission meeting:

Isaac Silberman-Gorn was also there. He, too, is associated with Citizen Action and is paid to do protests and fractivism astroturf in the Binghamton area. The money comes from groups like the NY-PIRG, which is in the business of scamming students and making rain for trial lawyers. Gorn comes from a well-to-do metro area family and loves the cameras almost as much as Lotorto. He is prone to making all sorts of unsubstantiated claims of the sort you do when you’re a student and think assertions are as good as facts.

Finally, there’s Vera Scroggins, who continues to do her tours of Cabot and WPX sites making wild statements to anyone who will listen. Her credibility was shattered long ago, of course, when she claimed a normal spring algae bloom in a local stream was caused by fracking, when she was caught on video mouthing multiple strings of obscenities and bigoted comments at Phelim McAleer and when she claimed to be excluded from going to her doctor by a court order when she had in hand documents indicating otherwise, not to mention the blocking of fire exits and far worse.

Despite all this horrid history, Vera Scroggins stills manages to find buyers to see her deliver her schtick. She’s prominent in several of McGregor’s photos and resonates in wild wacky world of fractivism where the more bizarre your behavior, the more interest they have in hearing what you have to say. This bus trip is just more instance of fractivism’s ugly side.

Fractivism is all astroturf, it’s not credible at any level and it’s confined to a very tiny group of people who show up everywhere doing the same things over and over again. It is, as both we and Nick Grealy have recently noticed, on the fast track to obscurity. The good news is this; when Food & Water Watch and NY-PIRG have to rely upon folks like these and depend on images like this one from the tour (of Ray Kemble, a Dimock junkyard operator) to make their case, we know how little they really have. 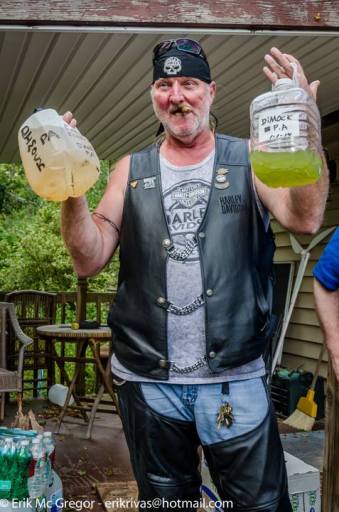 It says it all, doesn’t it? That’s the wild and wacky world of fractivism.

13 thoughts on “The Wild Wacky World of Fractivism”