Many don’t realize it, but non-profit corporations can be very profitable. There’s no better example than Food & Water Watch, which has been around only since 2005 and spent $11,501,540 in 2012, while pocketing $497,069. Food & Water Watch has primarily ridden two issues to get there: opposition to; (a) genetically modified foods (which have the potential to erase hunger on this planet) and (b) shale gas, which has revolutionized energy production.

Food & Water Watch’s shale gas opposition has been about as odious as it gets. They have been behind dirty campaigning in not only New York State, where they are the reality behind the New Yorkers Against Fracking facade, but also in California, Michigan and Ohio, for example. It has been clear for some time it’s all about the money for Food & Water Watch as the alerts they send out to supporters never fail to include a half-dozen or so fund-raising appeals, but the extent to which Food & Water Watch has feathered its own nest isn’t apparent until one examines all its 990 returns.

Yes, Food & Water Watch has done very well. Check out this table summarizing their financials from their beginning in 2005 to 2012, illustrating just how well: 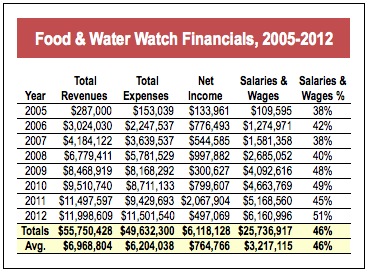 Notice the organization has averaged $764,766 per year in net income since it was formed in 2005 as a spinoff of Ralph Nader’s Public Citizen group, and ended 2012 with $6,068,124 in net assets after a little over seven years of operation. Food & Water Watch Executive Director Wenonah Hauter previously served as director of the latter’s energy program. (While there, she advocated for re-regulation of natural gas prices “to better protect consumers” due to its ever “bigger impact on the U.S. economy” which is ironic, considering Food & Water Watch’s current position on natural gas, but let’s stick with following the money for now).

There is a wealth of fascinating information available from Food & Water Watch’s financial statements and 990 returns, which are available here through 2012. It is, for example, putting more and more of its money into salaries, which consumed 51% of its revenues in 2012. Wenonah Hauter pulled down the tidy sum of $177,493 in reportable compensation in 2012, plus there were five more employees earning more than $120,000 annually. Then, there is a retirement program for vested employees, which cost the organization $265,974. Folks are doing very well at Food & Water Watch. 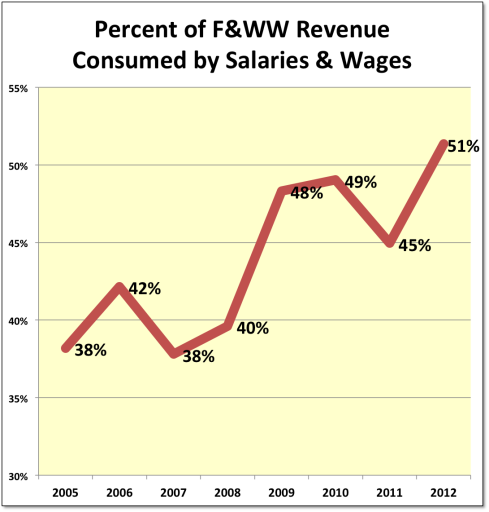 Food & Water Watch also spends a lot on office space, as it paid $657,833 in lease expenses in 2012 for its 17 locations around the US and in Belgium. It spent $525,381 outside the US, in fact,  on “staff and consultants to work with coalition partners to track the global impact of US corporations on public policy.” That phrase offers some further insight into what Food & Water Watch is all about and it’s not food and water, but let’s stay focused on the money a little longer.

How does Food & Water Watch do so well financially? Well, like all fractivist outfits, it looks to all sorts of rich elitist foundations for funding and some are the usual suspects while others are not so conventional names. It was formed in late 2005 with a $287,000 grant from the Jewish Communal Fund. Beginning in 2007, it started collecting big money from the Vanguard Charitable Endowment Fund ($2,590,000), the Schwab Charitable Fund ($1,005,006), the Public Welfare Foundation ($50,000), the Park Foundation ($100,000), the Jewish Communal Foundation (another $245,000) and an “anonymous” gift of $40,000 through the Lehman Brothers Trust Fund.

The Park Foundation is the funder of all fractivism, of course, and has, altogether, given Food & Water Watch some $1,110,000, but the others are names not normally associated with fractivist causes. During subsequent years, some of those names appear (e.g., the Richard and Rhoda Goldman Foundation) but most fall into the category of “donor-advised funds.” These include not only Jewish Communal, Vanguard and Schwab funds, but also the Fidelity Charitable Gift Fund, the Greater Kansas City Community Foundation and the National Philanthropic Trust.

What are these donor-advised funds? Well, they’re non-profit entities where you can park money until you’re ready to donate it but get the tax-exemption immediately.  They are more efficient for donors because money is combined and the overhead costs are spread further. They also make a lot of money for the managers, which has brought the Schwabs and Vanguards into the mix.

They were also, for several years, on the IRS “dirty-dozen” list of activities likely to facilitate a certain amount of scamming. Some legislative fixes got them off that disreputable list, but they are cheating taxpayers in the sense that tax-exemption comes first and charity later. The National Philanthropic Trust, for example, took in $276.5 million in 2012, but only distributed $151.7 million.

That isn’t the problem that concerns us or the feature that most attracts donors, however. That is captured in these quotes from a CNBC article (emphasis added):

“There are no requirements that these funds give out money at all. Anything that’s given is just because the donors wanted to. Philanthropic organizations are required to give out 5 percent, and some people think even that’s too small,” said Stacy Palmer, editor of The Chronicle of Philanthropy. “Fidelity and others are trying to do what they can, but they don’t have a lot of leverage.”…

Even when money is ultimately given to a charity from a donor-advised fund, it can easily be given anonymously. That means charities often have no way of telling who the donor is, or how they might develop and build that relationship.

“It’s really frustrating for charities because they feel like we’re hiding them,” said Heisman. “We’re not, but a lot of donors want to be quiet. They don’t want to shout it from the rooftops.“…

Yes, donor-advised funds avoid the donor having to disclose their role. It’s another way of hiding the influence of big-money and when it comes to supposed “charities” like Food & Water Watch, that means political influence. It allows donors to give money to an organization that repeatedly engages in dirty tricks like this one without having to get their own hands dirty in the process. 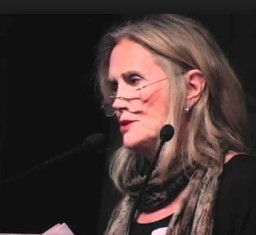 The Park Foundation, for all its chicanery, at least tells us where the money comes from (the snob heirs of the Park Communications empire), but not so in the case of Food & Water Watch. The latter took in 75% of its revenue in 2012 from just two donor-advised funds; the Greater Kansas City Community Foundation and the National Philanthropic Trust and no one will ever have a clue who’s really exercising the political influence.

And, make no mistake about it, Food & Water Watch is a political organization. It may be classified as a “charity” but everything it does is political in nature. It also uses the NY-PIRG trick of setting up a companion 501(c)4 organization that supposedly is the separate political arm, but it simply loans that organization money from the “charity” side at no interest whenever it needs it.

Moreover, because the organizations share staff and space, etc. any allocation of spending between the two is purely theoretical anyway. Food & Water Watch faithfully reports on its 990 returns that its lobbying activities fall below IRS permitted maximums for “charities” but these devices allow it to hide what’s really happening and when you compound this with the fact no one knows where the money comes from, you have enormous hidden political influence, much of it directed toward opposition to natural gas development.

It’s a scandal, really, and perhaps a few Congress members or someone like Attorney Cleta Mitchell, who has been making mincemeat out of the IRS recently, ought to direct some attention to Food & Water Watch as a primary example of what the agency should have been looking at while it was politically delaying approvals of new tax-exempts.

It’s also worth noting Food & Water Watch, in 2012, according to my research, received $8,971,200 from the two donor advised funds, $290,000 from the Park Foundation and $50,000 from the Rose Foundation for Communities and the Environment. That left $2,687,409 that came from public fund-raising of the sort we see in all those solicitations they send out. They spent $751,105 collecting money, so that represents 28% of what they didn’t collect from big-money groups. That’s a far cry from the 7.5% they’d have us all believe.

Why is any of this important to natural gas supporters? First, it demonstrates, yet again, how the other side works and wealthy special interests who don’t want their names associated with dirty fractivist tricks are able to politically influence events. Secondly, it shows how little true grass-roots support there is for the fractivist cause. It’s all a facade. 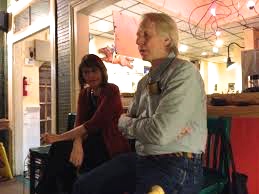 Finally, when you look at who Wenonah Hauter really is, what she said before she created Food & Water Watch (see above) and how this organization operates, you realize how little the ostensible purposes of the organization matter to what it does. The superficial causes change with the wind, but what is constant is the anti-capitalism, which she is fighting with the tools of capitalism (e.g., donor-advised funds run by major investment firms). Wenonah Hauter is a radical, a friend and associate of Wade Rathke, the founder of the dispicable ACORN group, in fact. She is using Food & Water Watch as another armament in her war against capitalism. She’s fully entitled to do that, of course, but not with tax-exemption as a “charity.” There’s simply too much profit in Food & Water Watch.