Recent rumblings from Radnor (home of Maya Van Rossum) about the Delaware Riverkeeper Network she runs tell us a lot about who the Riverkeeper really is.

Jim Willis, who runs the excellent Marcellus Drilling News and whose posts we often use here, always refers to Maya Van Rossum as “THE Delaware Riverkeeper,” as a way of highlighting the cult of personality surrounding the non-profit corporation known as the Delaware Riverkeeper Network. The line between the corporation and the person is so fine it can seldom be seen. The organization exists, it seems, for two purposes; promoting Maya and serving as the agent for some very rich and powerful special interests. Some recent activities involving THE Delaware Riverkeeper in Maya’s hometown of Radnor reveal quite a bit about who the Riverkeeper really is and what it’s about. 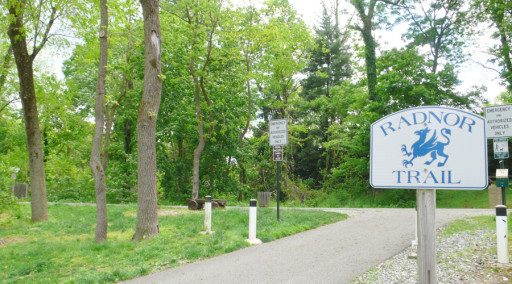 I wrote about Radnor a while back to report on some how Maya Van Rossum was leading a campaign against the use of the Roundup® herbicide on a farm near her, despite the fact she was willing, as the Delaware Riverkeeper, to recommend it for use along the Delaware. It was a reflection not only on her hypocrisy, but on the obsession with which she attacks issues in Radnor under the aegis of an organization that’s supposed to be serving a much broader purpose.

It turns out there was much more. Van Rossum has also been heavily involved in some stormwater planning in Radnor Township and, of course, wherever she goes controversy follows. The Township created a Stormwater Management Advisory Committee a few years ago following a devastating flood and, having long desired to secure funding for a pet project of hers called the West Wayne Preserve, Maya managed to obtain a seat on the committee, perhaps with the thought some of the revenue from a stormwater management fee might go to that project. She used the Delaware Riverkeeper Network organization as a vehicle to advocate for this 6.3 acre suburban park, although it hardly qualifies as a high priority issue for anyone outside of Radnor or even as a significant contribution to stormwater management.

The other members of the Stormwater Management Advisory Committee apparently had different ideas on how to best spend their stormwater management (things such as actual stormwater improvements) and Maya abruptly resigned this Spring when she didn’t get her way. That, though, wasn’t the end of it as she then launched a war against the committee and the township, filing under open records laws for copies of e-mails among committee members. She did so as an individual but, of course, the news reports would lead one to believe she spoke with the gravitas of being THE Delaware Riverkeeper.

There’s also a Facebook page called Radnor’s Environmental Matters that reads almost as if it was written by Maya or someone close to her and perpetuates the controversy (along with Riverkeeper anti-fracking schtick). It all gets messy very quickly (as is typical when the Riverkeeper is involved) and I’m not going to try to unravel it all here because, frankly, what happens in Radnor is not that important to natural gas and to rural economic development, which, after all, is the focus at Natural Gas NOW. 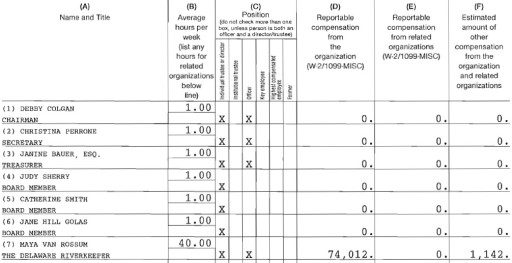 The first noteworthy thing is the listing of Maya Van Rossum as a director. She identifies herself earlier on the 990 simply as “The Delaware Riverkeeper” (was Jim Will right or what?) but she has a Deputy Director so we can presume she effectively serves as executive director of the organization and is also on the board. Here’s what legal experts have to say about that and it’s self-explanatory:

The law requires that the best interest of the nonprofit prevail over the director’s personal or business interests; if the executive director is a paid staff person who sits on the voting board of directors, that executive director may have a conflict of interest by serving on the board.

A conflict of interest is an actual or perceived interest by an officer, board member/director, or staff member in an action that results in, or has the appearance of resulting in, personal, organizational, or professional gain.

A conflict of interest can occur if the Executive Director (ED) is a paid employee of the organization and a voting member of the board of directors, since every decision the board makes relating to budget and compensation will impact the ED. The ED would be voting on her own salary, which can be a conflict.

The second thing is something we’ve pointed out before and which is confirmed in the 990: Board Chair Debbie Colgan is the sister of Tracy Carluccio, Maya’s Deputy Director – another conflict of interest. The 990 does say there are only six voting members of the board and five independent members, so this may be how the Riverkeeper is getting around the issue but it’s still unusual.

Then, there are two other names on the list who are connected by one of the other individuals figuring prominently in the war by Maya and friends against Radnor Township over e-mails; Attorney Dan Sherry. Dan Sherry is, reportedly, the son of Riverkeeper board member Judy Sherry and lawyer for board member Christine Perrone. It’s beginning to look as if the Delaware Riverkeeper should be called the RadnorKeeper, although I continue to contend it’s really the “Delaware PovertyKeeper.”

Then, there is Attorney Janine Bauer, who not only sits on the board as treasurer but represented the Delaware Riverkeeper in court in this case against the Philadelphia Gun Club, where the Riverkeeper shook down the Gun Club for $15,000 and forced it to apply for a NPDES permit for its pigeon shoot. Here’s what the American Bar Association says about this conflict of interest (once again, self-explanatory):

Catherine Smith, another board member, owns the Redbud Native Plant Nursery, which is located not far from Radnor, which gets free advertising from the Delaware Riverkeeper (see here also).

Finally, there is Jane Hill Golas who, apparently, is a videographer for something called PlanPhilly, which is run by a Matt Golas and is a project of WHYY, one of the funders of State Impact and a beneficiary of William Penn Foundation financing, just like the Riverkeeper. She, too, lives near Radnor, it appears. She also did this puff piece for the Riverkeeper without ever mentioning her involvement as a director of the organization.

All of this serves to demonstrate the Delaware Riverkeeper Network isn’t just the dirty tricks arm of the William Penn Foundation but, also, a cozy insider world of friends of Maya where no one worries much about conflicts of interest, at least not in the way most non-profits do.

This is not to say there the funding sources aren’t still the bigger issue. The latest Riverkeeper 990 return includes a Schedule A indicating the following contributions by those giving the organization more than $5,000 or 2% of its annual contributions over the last five years: 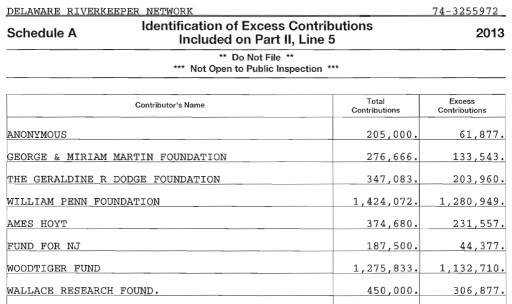 Although this schedule is, apparently, not open to public inspection under IRS rules it is, nonetheless, part of the Public Disclosure Copy on file with the Commonwealth of Pennsylvania, from which our copy was obtained. It shows the major role of the William PennFoundation in financing the Riverkeeper (20% of all contributions), Henry Wallace descendants (Wallace Research Foundation and Woodtiger Fund, who together provided another 24%), the Rockefeller family (Geraldine R, Dodge Foundation for 5%) and four others at 15% combined, meaning eight special interest entities funded almost two-thirds of the Riverkeeper budget. Compare that to the $22,690 in membership dues it took in 2013, about 1% of its budget, and you see what’s happening.

That’s who the Delaware Riverkeeper really is.

6 thoughts on “Who Is the Delaware Riverkeeper, Really?”