The Delaware Riverkeeper is flaunting tax-exemption and other rules and those agencies who entertain the group themselves become conflicted at every turn.

The Delaware Riverkeeper would not exist but for the funding of the Haas, Heinz, Rockefeller Wallace families who aim to make a wilderness of as much of the Northeast as they possibly can. It is the political arm of the William Penn Foundation which, as a private foundation, shouldn’t be engaged in any politics (lobbying) whatsoever but, by handing mega-grants to the Riverkeeper exercises does so in a major way.

There are rules supposedly governing both the foundation and the Delaware Riverkeeper, who are treated as tax-exempt charities both with respect to their operations and the donations made to them by others. Those rules, and others, are blithely flaunted and tie up anyone who deals with the organization into knots. It’s time it was investigated in a serious way.

The DRBC has even taken money from the William Penn Foundation, chief funder of its legal opponent, with no embarrassment, hopelessly compromising the agency and making a mockery of its independence. It’s old news now and, yet, the Riverkeeper is still there, with its radical lawyer Jordan Yeager protecting the DRBC’s flank in the lawsuit brought by the Wayne Land and Mineral Group. There are conflicts everywhere the eye can see.

Meanwhile, Yeager’s law firm earns a small fortune representing the Delaware Riverkeeper, the payments coming indirectly from the same William Penn Foundation to whom the DRBC turns for help in studying gas drilling regulations that somehow never move forward. Yeager, in fact, according to the Riverkeeper’s 990 return (highlighted version available here), took in $320,831 from the organization in 2015:

Part of that, of course, presumably went to fighting poor Middlesex Township, Butler County, Pennsylvania over fracking, despite the fact it is located in the Ohio River basin, which is as just about as far removed from the Delaware River as you can get in Pennsylvania. 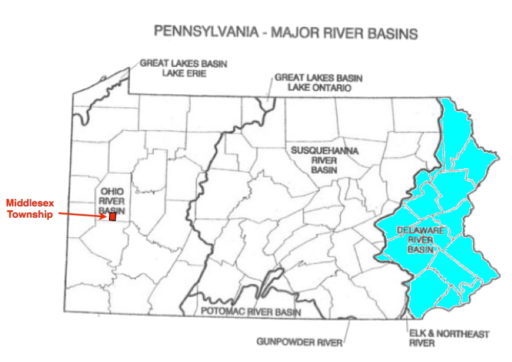 The location is interesting given the fact this is how the Delaware Riverkeeper describes its mission to the Internal Revenue Service:

It takes neither an English or a Geography major to understand harassment of a tiny community two river basins away has zero to do with championing the rights of Delaware River and tributary stream communities. It all about an ideological political campaign against natural gas development, which includes plea after plea related to legislation on the subject. This one is typical of what the Delaware Riverkeeper has been doing for years: 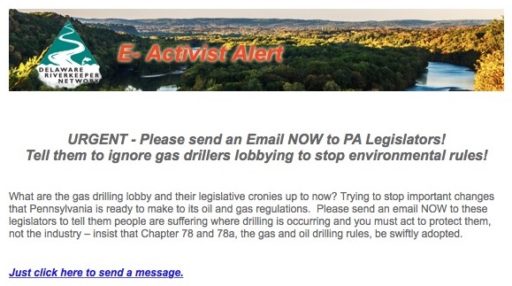 This is grass-roots lobbying. Just like this one from 2015 and many more. The organization is inherently political in nearly all that it does, while pretending to be a charity. Yet, their latest 990 return shows this is what they spent on it:

Incredibly, the Delaware Riverkeeper wants us all to believe it spent a mere $29 on grass-roots lobbying in 2015. Pay no attention, the group says, to the fact it does little that is not political. Ignore the repeated calls for action directed at legislators. No one spent any time or money whatsoever other than a domain renewal fee or whatever else that $29 happens to represent. It all just happened, magically, with no expenditure of effort or funds by anyone.

It’s nonsense, of course, but the sort of brazen attitude those accustomed to getting away with stuff begin adopting as their persona. Following our suggestion, in 2015, that there was something not quite right about Maya van Rossum serving on the Board of Directors of the organization and simultaneously serving as “The Delaware Riverkeeper,” the 990 return indicates she apparently stop serving on the Board of Directors as did Debbie Colgan, sister of Deputy Riverkeeper, Tracy Carluccio.

Nevertheless, the brazen denial the group engages in grass roots lobbying continues; the $29 figure effectively being a “catch me if you can” middle finger to those of us who thought the iRS rules were meant to be followed. It’s the sort of thing one might expect from an organization identified with one individual who signs for the group as “The Delaware Riverkeeper.” Jim Willis, ever the sharp observer, picked up on this long ago, of course, but seeing it on an IRS return, of all things, really brings it home, doesn’t it?

Still, Maya van Rossum isn’t the only using the Delaware Riverkeeper organization as cover for a radical anti-development agenda. Her Deputy, Tracy Carcluccio, is also on the New Jersey Highlands Council, a regional governmental agency doing everything it can to stop development north of Trenton.

Interestingly, Attorney Janine Bauer, who leads the citizen group advising and supporting the Council—the New Jersey Highlands Coalition—also serves as Teasurer of the Delaware Riverkeeper Network. Moreover, the Executive Director of the American Littoral Society under whose aegis the Delaware Riverkeeper organization was created, Tim Dillingham, also served on the Highlands Council with Carluccio and both organizations have relied extensively on the same consultants (e.g., Princeton Hydro). It’s a tight group of de-growthers, indeed.

Moreover, Carluccio has bounced back and forth, one minute representing the Riverkeeper, as in this testimony (and clear grass roots lobbying) in favor of a frack ban in New Jersey in 2012, and then acting as a member of the governing board of the Council. The Highlands Coalition and Delaware Riverkeeper have even co-sponsored a joint “day of lobbying” in Trenton. And, the Riverkeeper spent but $29 on lobbying in 2015?

There is much more to get into and that will come, but the interlocking relationships of the Delaware Riverkeeper with the DRBC, the Highlands Council, the Highlands Coalition and others, especially funding organizations, shows what a nest of political corruption the whole network of anti and de-growth allies really is. Stay tuned for more details.