Middlesex Township landowners get to enjoy their victory over the little green bullies from Philadelphia and Bristol on the Delaware.

Sometimes, a picture suffices to tell a story. This story is one we’ve told before, in large measure, in our post “Little Green Bullies Lose; Landowners Triumph.” It’s about the victory of a group of landowners from Middlesex Township, Butler County, Pennsylvania who bore the full brunt of a vicious attack by the Delaware Povertykeeper a/k/a Riverkeeper, the Clean Air Council (the domain of Philadelphia trust-funder Josep Otis Minott, Esquire, who’s never done much of anything else) and the two uber-rich Pennsylvania high society families (the Haas and Heinz families) who funded their dirty tricks and their radical lawyer, Jordan Yeager. The landowners won out over the wealthy gentry class ideologues who went after them.

Given all this background, it is a delight to post the following picture of the gas well drilling rig at work on the Geyer wellpad. We’re told two of five planned gas wells should be completed in two weeks or so. 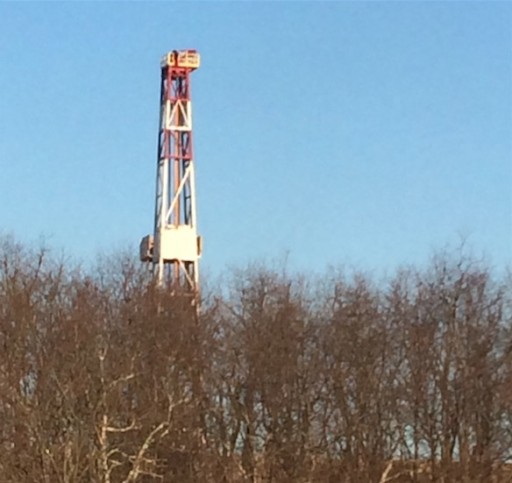 This wellpad, of course, is in the Mars School District, which was also dragged into this controversy by the carpetbaggers from Philadelphia, 200 or so miles, two watersheds and a planet away from Middlesex Township. The attempt to intimidate ultimately failed, though, as this drilling rig – a temporary but wondrous thing  – so perfectly demonstrates. It’s nice when the good guys win and the little green bullies go down to defeat.