If it is not enough the fractivist Delaware Riverkeeper gang aims to disrupt interstate pipelines; now they are targeting small pipeline projects, too.

A change-up in tactics for Maya van Rossum, THE Delaware Riverkeeper. Until now, Riverkeeper has mostly concentrated its efforts on big, federally regulated interstate pipeline projects, like the PennEast Pipeline. However, new marching orders have been delivered from Riverkeeper’s overlords at the William Penn Foundation. Time to go after the small potatoes, too.

So, Riverkeeper (funded big-time by William Penn) naturally obeys, and has filed a petition against building a small, 14-mile pipeline near Philadelphia that will feed a proposed Birdsboro Power project, slated for construction in 2018. Birdsboro Power is a proposed 488-megawatt natural gas-fired electric plant in Birdsboro (Berks County), to be built by EmberClear with major backing by two Japanese companies.. 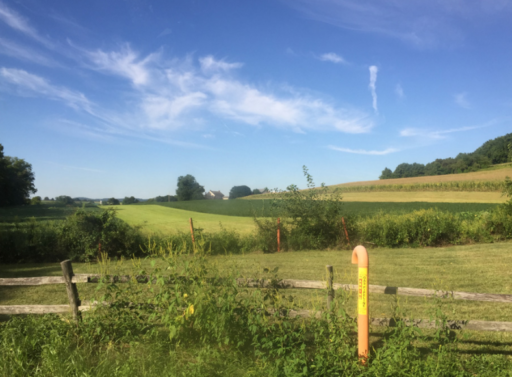 DTE Midstream plans to build a 14-mile pipeline from the nearby Texas Eastern Transmission Company (Tetco) pipeline to feed the plant. Riverkeeper has filed a complaint about the DTE pipeline with the Federal Energy Regulatory Commission (FERC), trying to slow or cancel the pipeline project–which would prevent the Birdsboro plant from getting built. Riverkeeper’s aim is to stop the use of fossil fuels, and do so using the excuse of “pipelines harm the environment.” The change in strategy for Riverkeeper is in moving from big pipeline projects to smaller pipeline projects.

A water conservation group has expressed concerns about a small natural gas pipeline project that would connect to a new gas-fired power plant in Pennsylvania.

In a filing with the US Federal Energy Regulatory Commission (FERC), The Delaware Riverkeeper Network said it was “particularly concerned” about the impact of DTE Midstream’s 76mn cf/d (2mn m³/d) Birdsboro pipeline on wetlands and communities.

The project would include about 14 miles (23km) of 12-inch diameter pipeline in Berks county, Pennsylvania, to transport natural gas from an interconnection with Texas Eastern Transmission (Tetco) to a new gas-fired power plant in Birdsboro, located about 50 miles northwest of Philadelphia. DTE Midstream filed its application with FERC in May and expects to place the project into service by July 2018. 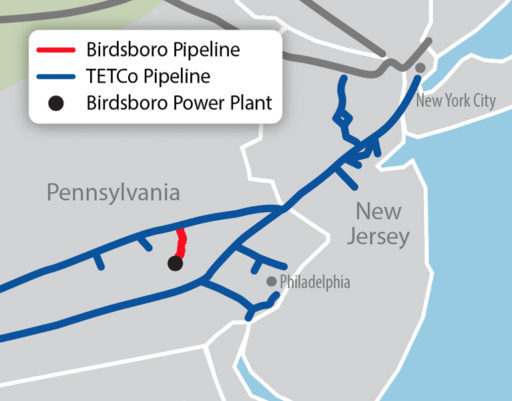 The group has asked FERC to allow them to have full rights to participate in further proceedings as the project application makes its way through FERC’s filing process.

Over the past year pipeline projects in the US northeast have come under increasing scrutiny from environmental groups and state regulators, with two large projects denied permits to cross waterways in New York and a third denied a water permit in New Jersey.

If successful in delaying Birdsboro plans, the filing may indicate that smaller projects are just as susceptible to opposition as larger ones.

The 488MW Birdsboro Power Plant includes a gas turbine and a steam turbine, and is being built on a brownfield site that was once a manufacturing facility. The plant is expected to begin service in the second quarter of 2019.

Inexpensive natural gas from the nearby Marcellus and Utica shales were a driving force behind the power plant project, according to developers Ares Management. Spot natural gas prices at Tetco M-3, which includes deliveries on Tetco in Pennsylvania, have averaged a 29¢/mmBtu discount to the Henry Hub so far this year. 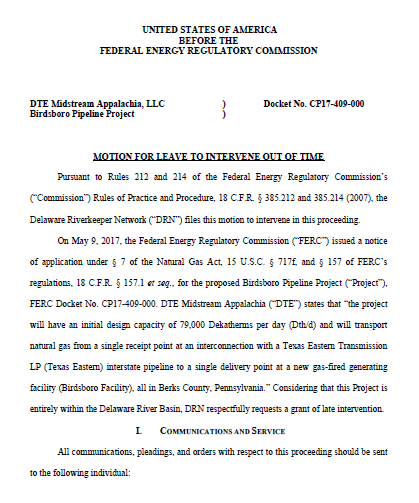 Editor’s Note: It’s worth perusing this short motion to intervene to see the sort of shallow and misleading arguments the Delaware Riverkeeper makes, arguing how a short pipeline to serve a power plant in Berks County is going to somehow drastically impact the Delaware River. What I noticed, though, was this sentence (emphasis added):

Additionally, DRN’s specifically focuses on issues related to the water quality of the Delaware River Basin, which is not currently being adequately represented by any other parties.

9 thoughts on “Delaware Riverkeeper Now Going After the Little Guys”