Unbelievable as it may be, fractivists are trying to pull their Dimock tale out of the dustbin of history by defending a “weapons grade” uranium charge.

It’s time to do one of those “you can’t make this stuff up” stories. This one, predictably has to do with Dimock, the original tall tale of fracking. It grows out of the response to my “Pigs to Rigs” post about Cabot’s suit against pig farm lawyer Charlie Speer and his client; junkyard plaintiff Ray Kemble.

The article brought numerous cheers from Susquehanna County residents and others familiar with the saga who were thoroughly pleased to see the tables turned on the not-so-funny jokers in their midst. Media types, apparently tired of trying to make something serious out of wild Craig Stevens, Ray Kemble and Vera Scroggins accusations, mostly shrugged it off.

But, one hard-core fractivist by the name of Hope Forpeace (real name) thinks the “Pigs to Rigs” lawsuit is somehow a fatal mistake for Cabot and the industry. Her rationale? Cabot really did pollute Dimock wells with “weapons grade uranium.” 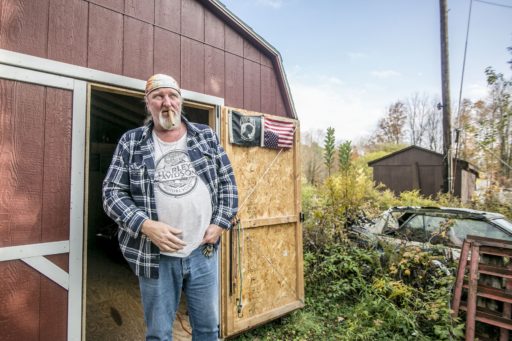 I know Hope Forpeace. I’ve met her, gave her a tour of some of the gas fields, have talked to her by phone and have approved many of her comments on this blog. She’s a Californian obsessed with fracking and assorted other causes and detests our friend Phelim McAleer of FrackNation (no peace for him). She’s visited Dimock many times and has made Ray Kemble’s case her own in many respects. She’s made numerous comments on the “Pigs to Rigs” post and, for some odd reason, thought bringing “weapons grade uranium” into the discussion would aid her credibility and further her cause.

Readers will recall, of course, Phelim McAleer obliterated Craig Sautner’s credibility by filming him getting so carried away with his own schtick that he introduced the term “weapons grade uranium” to describe pollution he said had been caused by Cabot. It was the end of the Sautner crusade and his dirty water jug routine. Combined with the EPA water tests and his on-camera rage at the agency, the episode finished him off. Hope has never forgiven Phelim for it, which is how “weapons grade uranium” entered the discussion once again. Here’s how it went:

Hope Forpeace: DEP found weapons grade uranium in Dimock wells. If you know anyone. I have a jpeg of those results if Tom would like to allow that submitted here somehow…

Me: Oh, please send it along. I promise to publish it.

Hope For Peace: Sure Tom .. are you saying you have never seen original Dimock / DEP testing?

The last comment also included a link to this video:

This is the evidence of supposed contamination of Dimock water with “weapons grade uranium” via drilling and/or fracking. These are, we’re told, the Pennsylvania DEP water tests, although there are no headings, no dates or anything else to indicate the data actually comes from DEP. Let’s, for the sake of argument only, though, just accept that these are, in fact, DEP test results of Dimock water wells and analyze Hope’s contention.

First, from the “I can’t believe I have to explain this category,” is the fact “weapons grade uranium,” is enriched uranium, not uranium found in rocks. The World Nuclear Association describes it as follows:

Secondly, the mere presence of Uranium 235 in Dimock rocks means little or nothing. It’s the amount that matters. Fractivists such as Hope suppose it’s enough to shout “URANIUM” three times as loudly as they can to make their case.

It reminds me of one the best moments of my time as part of the EID Marcellus team. Bruce Ferguson and his Catskill Citizens for Safe Energy group decided to exploit the Dimock controversy with a billboard that showed a pitcher of dirty water combined with a list of elements typically found in groundwater, as if that somehow proved the water Dimock folks had been drinking for centuries had been newly contaminated with these chemicals and Cabot did it. They completely ignored the amounts and the natural occurrence factor. We decided to have some fun with it by running a “dirty pitcher” contest that sent EID higher-ups into cardiac arrest and drew gasps from fractivists, but we made our point and it was great, great fun to boot.

I can’t remember if uranium was on the billboard list, but I do know it’s natural and it’s not a problem. The EPA drinking water standard for uranium is 30 µg/L (30 microliters per liter or 30 millionths of a liter). The four lines of uranium test results displayed in the above video are in picocuries per liter (pCi/L). Converting the latter to the EPA criteria, we get the following:

Note the four Kemble uranium test results indicate levels were from 29.92 to 29.99 µg/L below the 30 µg/L EPA standard. I won’t bother calculating the orders of magnitude by which Hope’s assertions are off the mark but it’s obvious there’s no problem. It’s so obvious this doesn’t come anywhere near “weapons grade” that I suggest we mine this stuff, ship boatloads of it to the Norks at a discount so they can spend the next million years or so trying to develop a nuclear weapon from it. I feel that safe.

In Pennsylvania, uranium deposits occur in sedimentary rocks of Late Devonian to Late Triassic age in the Appalachian Plateaus, Ridge and Valley, and Piedmont provinces. As a result of searches made by prospectors and reconnaissance work by U.S. Geological Survey field parties, uranium occurrences have been discovered in three principal stratigraphic sequences: (1) Upper Devonian rocks, (2) Upper Mississippian and Lower Pennsylvanian rocks, and (3) Upper Triassic rocks.

Some of the uranium occurrences probably formed by syngenetic deposition, others by early epigenetic concentration, and a few by relatively recent leaching and redeposition by ground water.

Not only that, but an ATSDR study (yes, those folks), states the following (emphasis added):

A large drinking water study was performed in which data from the National Uranium Resource Evaluation (NURE) program plus data prepared for the EPA (DOE 1981b; USGS 2006) were compiled for a total of over 90,000 water samples. Domestic water supplies were represented by 28,000 samples and averaged 1.7 pCi/L (2.5 μg/L) uranium, with a population weighted mean value for finished waters, based on 100 measurements, of 0.8 pCi/L (1.2 μg/L). Other studies show the population-weighted average concentration of uranium in U.S. community drinking water to range from 0.3 to 2.0 pCi/L (0.4– 3.0 μg/L) (Ohanian 1989), while concentrations of uranium from selected drinking water supplies analyzed by EPA laboratories were generally <1 pCi/L (1.5 μg/L) (EPA 1985c, 1997b, 2005a, 2010b).

So, according to this analysis by ATSDR, uranium can range from 0.4 to 3.0 μg/L in typical drinking water, yet Ray Kemble’s uranium levels ranged from only 0.007 to 0.07 μg/L — at the very low end of what was found nationally.

So, where’s the beef here? Let me suggest there’s not even low-grade baloney to be found. Moreover, the only thing “weapons grade” is the level of deflection and obfuscation employed by fractivists to defend a greedy attorney and client who withdrew their lawsuit when the facts came out, thinking they would get away with a quick hit and retreat. They miscalculated and now further facts will come out exposing this enterprise fractivist charade for the fraud it is, which is why I spent time addressing these ridiculous “weapons grade uranium” allegations. Phelim has no idea how much he accomplished when he got Craig Sautner to utter those words.

28 thoughts on “Dimock Fractivists Do Weapons Grade Deflection and Obfuscation”